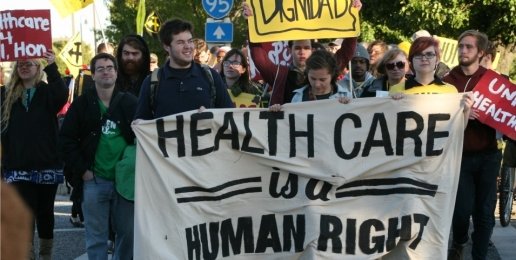 As Washington D.C. lawmakers wrangle about the details of the so-called “ObamaCare repeal,” “progressive” politicians and activists are ramping up their rhetoric. Setting aside the fact that the repeal effort has turned into an effort merely to reform government healthcare and the fact that Congressional leaders are seemingly unwilling to undo the legislation that mandated socialized medicine, I think it is important to once again address the Left’s dogmatic narrative that asserts that health care is a human right.

In 2010, I described the idea that health care is a human right as socialistic propaganda:

The implicit claim in the assertion that health care is a “right” is that it is a constitutionally protected right. All experts agree that health care is neither a constitutional nor a legal right. In America we understand that our rights to the free exercise of religion, to speak freely, to bear arms and to be secure from unwarranted search and seizure come from God.

What is really at issue is not whether health care is a “right” but whether citizens have a right to taxpayer-funded health care. What other cherished American “right” has ever required that we diminish another’s liberty? Does the right to free speech require newspaper owners to print every op-ed and editorial? Does the right to bear arms require the government to arm its citizenry? Does the freedom of religion require government-funding of churches, mosques and synagogues? Why then, does this “right” to healthcare require the government to take from some to give to others? When in the history of our country have we had to secure a right by trampling on the liberties of others?

Make no mistake, that is exactly what is happening with this government takeover of the healthcare industry. This new health care “right” will be forced on every American, and it will be made possible by taking from citizens “according to their ability” and giving to others “according to their needs” (Karl Marx, 1875).

We only have to look to the U.K. and the sad case of Charlie Gard to see what government-controlled health care looks like. If the bureaucratic “experts” deem you unworthy of medical treatment, they can slam the door on any options you may want to pursue. We might as well put a fork  in any semblance of liberty when it comes to parental rights, conscience rights and free will. The tyrannical government decides.

ObamaCare forced many American citizens into a socialized health care system and forced states into an enormous expansion of Medicaid. According to the Chicago Tribune, approximately 650,000 Illinoisans were added to the Medicaid rolls over the past few years. Crain’s Chicago Business claims that this “expansion has caused skyrocketing enrollment, massive cost overruns and siphoned away incredibly limited resources from those who truly have no way to help themselves.” The article points out that this expansion has cost Illinois taxpayers “more than $9.2 billion—more than double what was projected.” It is part of the reason state lawmakers voted for massive tax hikes earlier this month.

Sadly, the costs of ObamaCare have been much higher than the so-called “experts” projected, and the Republican version of socialized medicine may not prove to be much better. More important, while the financial costs to taxpayers is considerable, the damage to personal liberty is incalculable.

Fearmongering Over Medicaid Ignores Just How Bad the Program Is

Ted Cruz wrestling with ObamaCare … Is he winning?

Why is Healthcare So Expensive?

Help expand our reach by forwarding this email to like-minded family and friends.