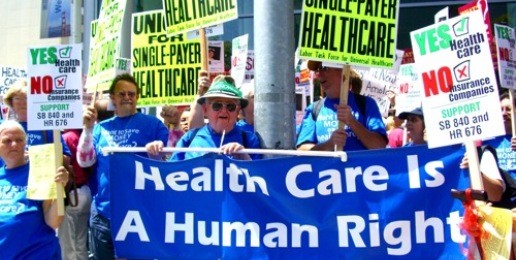 Like many Americans across the nation, I watched intensely as Congress debated and ultimately passed the onerous health care “reform” bill Sunday evening. One main point of contention is the idea — affirmed by some radically “progressive” lawmakers — that health care is a “right.” This is nothing short of socialistic propaganda. The implicit claim in the assertion that health care is a “right” is that it is a constitutionally protected right. All experts agree that health care is neither a constitutional nor a legal right. In America we understand that our rights to the free exercise of religion, to speak freely, to bear arms and to be secure from unwarranted search and seizure come from God.

What is really at issue is not whether health care is a “right” but whether citizens have a right to taxpayer-funded health care. What other cherished American “right” has ever required that we diminish another’s liberty? Does the right to free speech require newspaper owners to print every op-ed and editorial? Does the right to bear arms require the government to arm its citizenry? Does the freedom of religion require government-funding of churches, mosques and synagogues? Why then, does this “right” to healthcare require the government to take from some to give to others? When in the history of our country have we had to secure a right by trampling on the liberties of others?

Make no mistake, that is exactly what is happening with this government takeover of the healthcare industry. This new health care “right” will be forced on every American, and it will be made possible by taking from citizens “according to their ability” and giving to others “according to their needs” (Karl Marx, 1875).

According to U.S. Representative John Boehner (R-OH), this legislation will create 160 new governmental boards, commissions and mandates and require $500 billion in tax increases to pay for it. Of course, that will be only the beginning, as additional taxpayer funds will most certainly be needed.

Health care lawyer and policy analyst John S. Hoffilluminates the troubling questions left unanswered by the phrase “right to health care,” which he argues “does not address the relevant issues that must be considered in considering taxpayer subsidies for health care”:

How much health care is to be paid for by the taxpayer, for what beneficiaries, and under what circumstances? Does it include the most advanced or experimental treatment? Indeed, what is health care? Long term care? What are the parameters of self-responsibility? Should there be taxpayer subsidies for smokers, drug abusers, and dare-devils? And which taxpayers should be paying? Should the working young and low-income workers subsidize the health care costs of those who are wealthier and sicker? These are political judgments that we have barely addressed, and they are camouflaged by invocation of a broad principle of a right to health care.

President Obama and many in Congress are celebrating the passage of this ominous legislation — legislation that forces American citizens into the newly created socialized health care system. Sadly, the costs of this new government program are much higher than we think. Although, the financial cost to taxpayers is substantial, the cost to personal liberty is incalculable.