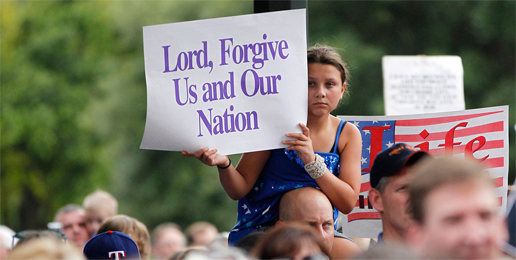 The U.S. House of Representatives has scheduled an October 3rd vote on H.R. 36, a bill that would ban abortions after 20 weeks up until the time of birth. The U.S. House passed a similar bill in 2015. During the debate on the bill, Congressman Sean Duffy (R-WI) gave one of the most impassioned speeches for protecting the lives of innocent pre-born children.

“This is not a debate about abortion or even non-abortion, pro-life or pro-abortion,” Duffy said. “Those who are even pro-abortion agree that these tactics are unacceptable. They have no place in our society, and that federal tax dollars should actually go to fund an institution that harvests baby body parts for sale is absolutely asinine.”

“What do we stand for in this institution if we do not stand-up for the most defenseless and voiceless among us?” concluded Duffy.

Another bombshell dropped during the hearing came from Dr. Maureen Condic, who is Associate Professor of Neurobiology and Adjunct Professor of Pediatrics at the University of Utah School of Medicine. She testified that the unborn child is capable of reacting to pain as early as 8-10 weeks. This is when most abortions in America take place.

Sadly, when it was brought to a vote in the Senate (where the Democrats then held a majority) it was defeated via filibuster.

The family of Micah Pickering was also present at the press conference, according to Lifenews. Micah Pickering is a miracle baby who survived after being born prematurely at 20 weeks. Today, Micah is a happy, healthy five year old.

SBA List Marjorie Dannenfelser stated the faces like Micah help bring this issue to life in many people’s minds.

“Micah really is the real face of this issue,” she urged. “Because it’s really easy to talk about it, the abortion issue, in abstract theoretical terms. But when you really have come across … and see a young man running around full of energy and love, you realize this is not any other political issue.”

U.S. Representative Trent Franks made similar references to Micah, according to Lifenews. “When Micah stands there,” he said, “you can’t ignore him. He’s as real as it gets.”

“I understand that mothers are in a great challenge in these circumstances and my heart is so deeply with them, but there’s nothing liberating about taking the life of a child. It doesn’t liberate the mother. It only puts her in a deeper heartache in the long run.

I’m convinced that if America will look at this as it is, and say ‘Okay, what’s the real question here? Does this thing kill a baby or not?’ If it doesn’t, then okay, it’s no big deal,” he concluded. “But if it really does kill a little helpless human baby, and it’s done that 60 million times now, isn’t it about time we changed direction?”

Representative Franks introduced the legislation back in January, and also proposed legislation in July in an effort to try to save the now deceased Charlie Gard.

Take ACTION:  Click HERE to send a message to your U.S. Representatives to ask him/her to support H.R. 36, the 20-week abortion ban, also known as the “Pain-Capable Unborn Child Protection Act.”  The U.S. House is scheduled to vote on the bill on Tuesday, October 3rd.

It is inexcusable, in the light the pain these babies feel and the broad public support for such bans, that such a federal ban does not already exist.