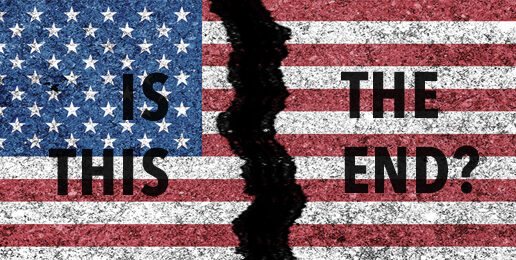 On paper, the United States is a democratic republic. But one could argue that we have become a tyranny of thugs where people are afraid to speak their minds, and media giants shut down voices with which they disagree. In a republic the majority rules while the minority has significant protections. Amazingly, it is now an angry, vocal minority that rules. The majority is, by law, supposed to get its way, but many significant changes are being made in America against the will of the majority, the Constitution, and the laws of the land. We live in perilous times.

Democracies, and especially democratic republics, are by nature slow to change; so, the speed by which changes are now being made in America is evidence that we are not operating as a republic. Violent Leftists are demanding immediate changes and spineless leaders are acquiescing. Radicals flank the Constitution, laws, and majority rule, and institute tyranny behind a façade of doing good for the “oppressed.” While it may be unfortunate that good changes take time, often a long time in a republic, so also do bad changes; therefore, the trade-off is in the protection republics provide against rapid changes which may lead to seriously bad, and sometimes irreparable outcomes. Wise people understand this.

The radical Left has been calling for “fundamental change” to America for a long time. They demand an end to capitalism and the instituting of socialism in its place. They loath the super-rich to the point that some of them have called for the deaths of the economic elite! (This, in spite of the fact that these same super rich fund their programs!) They complain that the few, the “One-Percent” run the country for their own benefit, inferring that such a small minority should not have such power.

But the Leftists who are now calling for radical change make up no more than one percent of the population as well! Apparently, they are not so concerned about the number of people in power, only that it is not themselves! It should be noted that the super wealthy can at least boast that they have produced billions in revenue and millions of jobs. The Left can only boast of having taken wealth others have created to spend as they wished!

The promises tyrants make often sound fine, and sometimes are, in themselves good. But, giving thugs the ability to institute change is to make a deal with the devil. History is filled with despots exploiting fears and problems to gain control over nations. Rome lost its republic to tyranny partially under the pretense of putting down slave revolts. (Note to Senator Kane: The USA did not create slavery). Hitler gained his power under the guise of liberating Germans from the oppressive restrictions placed on them by WW I victors. And so go the histories of China, Cuba, Russia, and a myriad other socialist countries. But make no mistake: no good person is ever a tyrant, period. Anyone willing to use force or brutality to achieve his personal aims must never be allowed a position of power in America.

Fifty years ago, I became aware of the Marxist’s goal to overthrow America. I wondered how free people would ever exchange the blessings that America provides for the bondage of a tyrant. It seemed an impossible mission, yet, in front of our eyes we are witnessing just such a scenario.

How have the Leftists been so successful? The answer is too complicated to address in detail here, but several key facts should be understood by all Americans. I would suggest that even as America was founded with a strong religious and spiritual flavor, much of its internal conflicts today originate in failing to maintain those spiritual convictions.

First: God superintends in human affairs, and either establishes or disestablishes governments according to His infinite wisdom. Whether the United States will survive intact for another century is dependent upon His sovereign will; but if we desire to continue, we must turn to Him in humility, repentance, and trust.

Second: While the Left is exploiting numerous social issues to divide the Nation, racism is probably the most significant one. They are doing so indirectly by playing on Americans’ guilt. That many Americans appear to have a guilt problem is hardly in doubt. However, I would suggest that its source is not rooted in slavery or Jim Crow. American’s “guilt complex,” if I may so call it, will find its explanation through an understanding of Scriptures rather than Leftist propaganda. America must return to its Founders’ perspectives, one point of which was mankind’s sinfulness, a concept nearly lost on Americans today.

Due to our sin, we all have a sense of guilt. This guilt can only be expiated by Christ but is being exploited by wicked people who, instead of pointing the guilty ones to Christ, attach it to the color of their skin. Multitudes across the nation have been misled into believing that their guilt is due to racism or an “unconscious bias” against minorities, and they are being led to believe they must make atonement through contrition and bowing before the idols of “Wokeism” or CRT.

But no matter how much a person bends the knee before the altars of BLM or any other man-made cause, the guilt will remain. Christ alone, by His work on the cross, can eliminate this guilt for all who trust in Him.

Third: While institutional racism is no longer tolerated in America, there are and will always be some individuals who are prejudiced against others, which, unfortunately, feeds the Leftists’ narrative that the country is racist. The headlines that the rare but real racist acts receive adds fuel to the fire, amplifies the demands for change, and gives more power to those who exploit the racism that does remain for their own personal objectives and power. It is illuminating that while some racist acts have occurred in recent years, they must be rare, or the propogandists would not feel compelled to create fake events.

Fourth: America faces a tremendous character shortage among our leadership class. Courage was once an essential virtue and was a prerequisite for leadership in a great republic like America. It is now seriously lacking. And worse, would-be tyrants among our leaders are seeking ways to insinuate themselves into positions of even greater power. Such are manifesting themselves before our very eyes!

There was a time when no one with character would allow “liar” or “coward” to be attached to their name. Today, such flaws have become a hallmark of leadership! Therefore, at a time when the nation desperately needs leaders of integrity, strength, and courage, few can be found. Do our leaders expect to be killed if they stand against the Leftist tyrants? Not likely, but they apparently fear something else even more than death: to be called names such as “bigot” or “hater!”  Oh my! Thus, while real American heroes, like those in the military and police, are willing to die for the nation they love, our political leaders capitulate at the mere threat of being called names! What a sorry lot they are!  Most Americans expect leaders to stand for what is good and right. Apparently, we expect too much!

So, what is to be done? Ultimately, substantial change will come only by God’s grace. People of good will can be reasoned with, and some change may happen. But the many who benefit from the present conflict will not only not help, they will actively resist. Thus, it is an up-hill battle.

That being said, however, the consequences of doing nothing are unacceptable. And, God demands faithfulness to His will, not necessarily success in it.

2.) Expose and resist evil as you are able. Be courageous!

3.) Turn a deaf ear to all who would, through name calling or even violence, force your submission. Yield not an inch to terrorists!

4.) Listen carefully and thoughtfully to all who ask your attention to their pain. Do what you can within the parameters of God’s word to relieve the suffering of others.

5.) Demand the same of your leaders and pray for them. They, too, must turn deaf ears to thugs and terrorists, but hear and respond to all who appear to have a legitimate grievance.  When leaders bow before the violent there is no end to their demands, and all will fall under their heels.