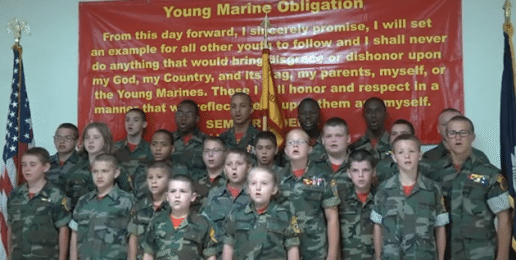 In a case of what seems to be a case of anti-religious discrimination and bigotry, U.S. federal officials have informed a local sheriff in Louisiana that he must remove the word “God” from the oath of a local Young Marines chapter, or forfeit federal funding.

Julian Whittington, the Sheriff of Bossier Parish (County), Lousiana, says he received notice from the U.S. Department of Justice (DOJ) that he must eliminate any and all religious elements from his department’s Young Marines chapter.  An attorney for the Justice Department’s Office of Civil Rights told Whittington that he must prohibit the Young Marines from participating in voluntary prayer and must excise the word “God” from the oath taken by the members.

I sincerely promise I will set an example for all other youth to follow and I shall never do anything that would bring disgrace or dishonor upon God, my Country and its flag, my parents, myself, or the Young Marines.

Whittington says that because he refused to submit to the religious cleansing of his Young Marines chapter, the DOJ has defunded a $30,000 grant supporting the youth diversion program.

“I flat said, ‘It’s not going to happen,”  Whittington said.  “Enough is enough.  This is the United States of America.  The idea that the mere mention of God is prohibited is ridiculous.”

U.S. Representative Dr. John Fleming (R-LA) condemned the Department of Justice action.  “There is a very wide effort coming out of this Administration that seeks to stamp out religious freedom of expression–particularly freedom of Christian expression.”

“They are willing to throw the youth overboard and remove the funding just in the name of making this an atheist, agnostic, secular organization,”  Fleming continued.   “It’s inconsistent with the framers of the Constitution.”