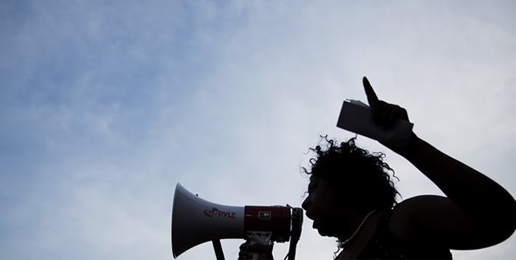 May I propose a New Year’s resolution for 2019? Let’s determine to speak up and to speak out, to raise our voices with clarity and compassion, to refuse to hold back regardless of cost or consequence. Will you join me?

To those of you who are already doing this, I encourage you to continue to stand strong.

To those who are not, now is most certainly the time. What are you waiting for?

One of the most important principles taught by Jesus was that if we try to save our lives, we lose them. But if we lose our lives for Him – for the gospel – we find them.

To apply this concept to our contemporary situation, if we try to avoid controversy and conflict so as to preserve our presence on social media platforms, we lose our souls in the process. We become compromisers, fearers of man rather than fearers of God. We are no longer guided by conviction; we are guided by convenience. We survive but we do not thrive.

We can learn a lesson here from Wang Yi, pastor of Early Rain Covenant Church in Chengdu, Sichuan, China. He was addressing the sinful policies of Chinese President Xi Jinping, who is fashioning himself to be the new Mao and is actively persecuting Christians and other minorities.

In a sermon dated September 9, 2018, Pastor Yi said, “President Xi Jinping does not repent he will perish!”

Yes, he said, “The government he is leading has sinned greatly against God, for it is persecution the Church of the Lord Jesus Christ, and if he does not repent, he will perish!”

But won’t Pastor Yi suffer consequences for preaching such a message? No doubt. In fact, he was subsequently arrested and is currently imprisoned. Yet he still preached with boldness and conviction.

What a contrast with today’s “gospel of nice,” a PC-compliant, made-for-America message if ever there was one. Whatever you do, don’t offend! Better to skirt the truth. Better to mislead. Just be sure to smile and be nice!

Of course, we should speak the truth in love. With broken hearts. With compassion.

Being mean is no more Christian than being weak.

Back in March, 2018, despite not being a fan of Infowars myself, I wrote an article titled, “Why YouTube’s Conflict with Infowars Should Concern Us All.”

I closed the article with this poem, inspired, of course, by the famous World War II poem of Martin Niemoller:

First they came for Infowars, and I did not speak out—because I found them offensive.

Then they came for Geller and Spencer, and I did not speak out­—because I found them obnoxious.

Then they came for Prager U, and I did not speak out—because I found them opinionated.

Then they came for a host of others, and I did not speak out—because I have my own life to live.

Then they came for me—and there was no one left to speak for me.

I followed this up with an article on August 6, 2018, “Conservative Speech Be Banned!” This added further documentation and closed with the same poem.

Since then, many other conservative and Christian outlets have been affected (see this shocking list for 2018 compiled by Allum Bokhari). And most recently, Rev. Franklin Graham, arguably the best-known, most-prominent evangelical voice in America, was banned from posting on Facebook for 24 hours because of an innocuous post dating back to 2016.

Facebook quickly apologized and said he was banned in error, but the fact that this could happen at all is another sobering wake-up call.

In 2016, I drew attention to a ridiculous attempt at Princeton University to ban the “m” word (man!) from its campus. No more “man hours” or “manpower” or “layman.” Different, non-sexist terminology must be employed, such as “person hours” (for “man hours”) or “personnel” (for “manpower”) or “non-specialist” (for “layman”).

You might say, “But who cares about what happens on a university campus. That’s already an extreme PC-environment.”

Of course, we should care about what happens on our campuses, since that’s where the next generation is being educated.

But these things are not just happening on college campuses. The UK Telegraph reported on December 27, 2018, that “The European Parliament is attempting to stamp out the use of words such as ‘mankind’ and ‘manpower’ and have them replaced with more gender neutral terms such as ‘humanity’ and ‘staff”.”

Yes, the European Parliament is trying to enforce this hyper-PC speech control.

And, on a related note, let’s not forget that Canada passed a law in 2017 against “misgendering” people, while a similar law had already been passed (with stiff fines) in New York City.

So what will we do? Will we continue to retreat in order to avoid conflict, thereby muting our own voices? Or will we speak the truth in love – as compassionate as we are bold, as Christlike as we are firm, as wise as we are unwavering?

If not now, then when? If not you and me, then who?

Let’s make this our resolution in 2019: “I will not hold back for fear of consequences. I will speak up and speak out as the occasion demands. I will love my neighbor by speaking the truth.”