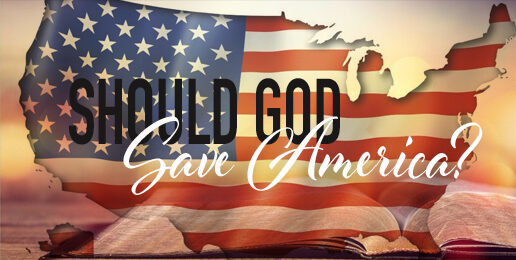 It has been interesting to read what Christians would like God to do for America. I have read repeated prayer requests for God to spare the Country, and I heartily agree with the sentiment. But I am also aware, as I hope most Christians are, that God operates sovereignly and wisely to achieve His own eternal purposes. His plans may or may not coincide with ours.

It is, therefore, our primary responsibility, regardless of politics, culture, and consequences to bring ourselves to the place where God can bless us. An appropriate question might be, “what must American Christianity be so as to not hinder God’s preserving America should He delight to do so?”

We could turn to the sixth chapter of Isaiah to observe what might be considered one man’s “job interview” with God. Isaiah, who went on to be one of the greatest of Israel’s prophets, had a gripping encounter with God where He saw Him, Jehovah, in His exalted glory. The first thought of the prophet was his own sinful condition! “Woe is me,” he exclaimed, “for I am undone!”

Dramatically, an angel symbolically took a coal from the altar’s fire and “cleansed” the prophet of his sin. The next utterance came from God Himself: a call for someone to serve! Isaiah received that commission having brought himself into conformity to God’s will through repentance and true worship and was thus prepared for an illustrious career as a man used by God to call Israel back to God.

Which brings me to my point. I do not doubt the sincerity of Christians who desire to see God do a great work in saving America from the disaster looming on the horizon. But we must not think that God is bound to answer our prayers simply because we ask, or that He would be so inclined if we refuse to be humble before Him.

To begin with, it appears that much of American Christendom has a seriously flawed understanding of worship. The sloppy use of the word indicates that we need a reexamination of what it is that God considers worship. We speak of “worship teams,” “worship bands,” and “worship leaders,” as if worship is something that requires a leader and occurs only when we gather with these people in charge.

It may be that some worship occurs during these services, but it is often incidental to them, not rising out of them. And the insipid and carnal preaching and music often produced in these “worship” activities is not the problem but a symptom of the problem. I would suggest that many, if not most, of the so-called “worship leaders” do not themselves understand what worship is, so it is not surprising that those who follow do not understand either.

Let’s speak the truth: lost mankind has no desire to worship God. “Because, although they knew God, they did not glorify Him as God, nor were thankful, but became futile in their thoughts, and their foolish hearts were darkened.” Romans 1:21, 22. Worshipping Him is no longer natural to the fallen image bearers of God and is rather offensive to us. For that reason, we create our own alternative forms of worship that, in the vanity of our minds, we imagine will fool God. Cain, in Genesis chapter four, was the first person to do so and was not at all pleased that God refused his faux worship.

Unfortunately, that early rejection by God of man’s substituted religion taught no one anything. History is largely the story of mans’ alternative religious theories butting up against other false religious theories, or against God’s genuine worship. It is not a pretty story.

God’s Chosen People, the Jews, were regularly rebuked by God’s prophets for replacing true worship with their own. At the very moment Moses was receiving the Law from God’s own finger on the top of Sinai the people at the foot of the mountain were creating a golden calf to worship. And a short time later, having received the instructions for offering incense in the Tabernacle, Aaron’s sons, Nadab and Abihu offered “strange fire” and were slain by God for their offense.

Often, Satan’s substitute worship does not appear obviously contradictory to genuine worship. He is too smart for that. His worship methodologies may have all the earmarks of genuine worship: music, beauty, serenity, etc., but a close look will reveal that it is not God who is being worshipped. It should be noted that when Satan sought to tempt Christ into false worship, he used Scripture itself, words that had come out of Christ’s own mouth!

A pastor who wrote on this subject a few years ago commented that what he often witnessed in contemporary “worship” services was not “come worship with me,” but rather, “come, watch me worship!” Thus, worship of God has in some cases been perverted into a worship of the “worship leaders!” Serving God and worship is no “spectator sport!”

Have we forgotten also that the incense and anointing oils God prescribed, as beautifully fragrant as they were, were for sacred use only and were not to be duplicated for the worshippers’ personal pleasure? Yet, the primary argument contemporary Christians make for the “style” of music and “worship” they choose is that they like it!

How can we expect blessings from God in that? Have we forgotten the repeated examples in Scripture of God’s dealing with false or misdirected worship? Is it that difficult to distinguish true worship from its counterfeits? Only if we wish to be deceived!

Fundamental to genuine worship are these things: It is about God and not us. It brings us to an honest appraisal of our own sinfulness and unworthiness in the face of His holiness and perfections. It reminds us that He is good, and we are not, and that we owe Him eternally for every good thing we have ever experienced and will experience. It brings us to silence and submission. The true worshipper has no demands and no will of his own, period!

Tragically, this is not the situation in American Christianity. On every hand we witness a capitulation to the world, a hungering after what the culture idolizes, a complacency about sin, and a willingness to tell the lost what they want to hear, not what they need to hear. It is not surprising that the church, having lost its saltiness, is “tread under foot” by the world.

So, will God save America? You tell me! Are we Christians living in such a way that God can bless us in genuine revival? That is debatable! But we cannot discount His grace. He generally does far better for us than we deserve, and ultimately, He will do as He pleases for His own glory. Therefore we can rest in the knowledge that “all things work together for good to those who love God. . . .”  (Romans 8:28, NKJV)

Let us rejoice and trust in Him!