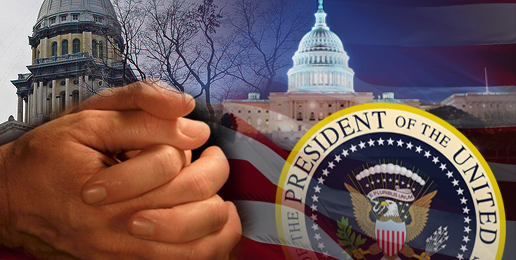 We normally send out prayer alerts to the IFI Prayer Team – to those 800 plus people who have opted into this special publication.  But in light of a new presidential administration and new legislative sessions in both Washington D.C. and Springfield, it is important that this message be viewed by as many Christians as possible, as we exhort each reader to prayer – fervent prayer, if I may be so bold. (Learn more about IFI’s Prayer Team HERE.)

Today, Donald J. Trump was sworn in as the 45th President of the United States.

Last week, state lawmakers were sworn into office in Springfield to begin the 100th General Assembly (a two year session).

Two weeks before that, on January 3, 2017, our federal lawmakers were sworn in, starting the 115th Congress (also a two year session).

All of these government officials have a tremendous duty before them to uphold the State and U.S. Constitutions and serve the general welfare of the American people. As Christians, we have an obligation to pray for them because it benefits us, our families, our neighbors, and society as a whole.

“I urge, then, first of all, that petitions, prayers, intercession and thanksgiving be made for all people—for kings and all those in authority, that we may live peaceful and quiet lives in all godliness and holiness.” ~1 Timothy 2:1-2

Pray for President Donald J. Trump. Pray that God gives him an abundance of wisdom, discernment and understanding of the issues before him. Pray that god-fearing advisers surround him.  Pray that his administration would do good, seek justice, defend the oppressed and do the hard things to establish sound moral and fiscal policies. Pray for his spiritual and physical safety and well-being.

Pray for Vice President-elect Mike Pence. Pray that God would use him in great ways to advise President Trump. Pray that he will have many great opportunities to share the truth of the Gospel and to disciple those within the administration. Pray that he would continue to seek God in prayer in all things. Pray for his spiritual and physical safety and well-being.

Let’s pray fervently for God’s hand of blessing and direction on Donald Trump over next 100 days!! May he learn to lean on the Holy Spirit in his new capacity.

We also urge you to pray regularly for U.S. Senator Richard Durbin and your particular U.S. Representative.  In addition, there are three federal lawmakers elected to new positions this session that we should also lift up in prayer.  They are U.S. Senator Tammy Duckworth and U.S. Representatives Raja Krishnamoorthi (D- Schaumburg) of the 8th District and Brad Schneider (D-Deerfield) of the 10th District.

Likewise, for our lawmakers at the State Capitol in Springfield, we must pray regularly for Governor Bruce Rauner and your own state senator and state representative. We also have a new Illinois Comptroller, Susan Mendoza. It would be wise to pray for her as she is in charge of the state “checkbook.”

In addition, we have twenty-three new elected officials who are in need of our prayers.  Here is the list:

Although we may disagree with the politics and worldview of many of the officials above, Christians have the privilege of going “above their heads” to appeal to an omnipotent God who is able to turn the heart of a king like a stream of water (Proverbs 21:1).

Pray that God would accomplish His purposes through these elected officials for the welfare of our state and nation.

Finally, pray that Congress will move to defund Planned Parenthood quickly, and that our state lawmakers will reject HB 40 — the bill to have our tax-dollars pay for thousands of abortions every year.

May God be pleased to answer our prayers!