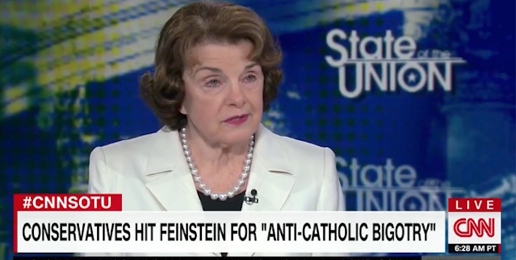 Diane Feinstein Doubles Down on Her Discrimination Against Christians Holding Public Office
Written By   |   09.20.17
PRINT

After an embarrassing rant about Christianity somehow disqualifying an individual from public office and impying that a religious test should be implemented for those seeking to hold public office, California Democratic U.S. Senator Diane Feinstein is doubling down on her remarks.

On Wednesday, September 6, 2017, Feinstein attacked U.S. Circuit Court of Appeals nominee Amy Coney Barrett during her confirmation hearing. Barrett, a mom of seven children, and a former clerk for the late Justice Antonin Scalia, was basically told her Catholic religion should keep her from being qualified for the judgeship.

“When you read your speeches, the conclusion one draws is that the dogma lives loudly within you,” said Feinstein. “And that’s of concern when you come to big issues that large numbers of people have fought for, for years in this country.”

There was justifiably a huge backlash against Feinstein’s comments, but rather than retract them and issue an apology, Feinstein instead is doubling down on her statement, while unsuccessfully trying to explain away her obvious prejudice for people of faith.

On an appearance this weekend with CNN’s State of the Union, Feinstein said:

“This is a woman who has no real trial or court experience,” she argued. “And, therefore, there is no record. She’s a professor, which is fine, but all we have to look at are her writings, and in her writings, she makes some statements which are questionable, which deserve questions.”

Barrett was nominated by President Trump to fill a vacancy on the 7th U.S. Circuit Court of Appeals, and clerked for the late Justice Antonin Scalia. Perhaps Feinstein is concerned with the idea of having a judge who clerked for Scalia, a “lion of the law” on the Circuit Court of Appeals. However, Feinstein’s comments are representative of a larger feeling within the Democratic party. This is illustrated by the fact that during the same hearing in which Feinstein told Barrett, “the dogma lives loudly within you,” another prominent Democrat, Sen. Richard J. Durbin of Illinois, asked her, “Do you consider yourself an orthodox Catholic?”

Questions and statements like these are entirely inappropriate and have no bearing whatsoever in determining Barrett’s qualifications and abilities.

The reality is, liberals have as many deep convictions as conservatives — they’re just not as often rooted in the Christian religion. So to suggest that they can be impartial and believers can’t is not only untrue, it’s unfair. Telling Barrett that the “dogma lives loudly within [her]” is to ignore the dogma that lives even louder within Senate Democrats.

Sens. Feinstein and Durbin were troubled not by Ms. Barrett’s Catholicism, but by her failure to prove her religion could conform to a more dogmatic progressivism. The “religious test” Democrats want to impose isn’t about religion per se; it’s about ensuring that every religious claim can be bent to more comprehensive political aims. It’s about defining anyone who dissents from the mores of the sexual revolution as disqualified from public office. That’s what makes Ms. Feinstein’s questioning so chilling.

Yet Feinstein stressed during the CNN interview that she has no animosity towards people of faith. “I think Catholicism is a great religion. I have great respect for it,” Feinstein said. “I’ve known many of the archbishops who have been in our community, we’ve had dinner together, we’ve spoken together over many, many decades, and I’ve tried to be helpful to the church whenever I could.”