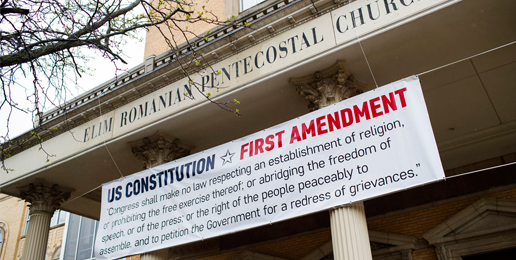 For these reasons, IFI has joined an Amicus Brief in support of Elim Romanian.

Until 1990, the U.S. Supreme Court had rightly afforded the highest level of protection to our first freedom, the free exercise of religion.  In order for actions of government to restrict free exercise of religion, the U.S. Supreme Court applied a standard called strict scrutiny, under which the government had to prove: 1) a compelling state interest, and 2) that any restriction was narrowly tailored to actually accomplish that interest.

Of all the dispositions and habits which lead to political prosperity, Religion and Morality are indispensable supports.  In vain would that man claim the tribute of Patriotism, who should labor to subvert these great pillars of human happiness, these firmest props of the duties of Men and Citizens.  ~George Washington.

In addition to other law, such as tax exemption, and housing allowance for “ministers of the gospel”, the Church’s freedom to gather and worship is protected no less than four times in the First Amendment alone, forbidding government from: establishment of religion, and prohibition of free exercise, speech and assembly.

However, in its decision in Employment Division v. Smith, the U.S. Supreme Court decided that the Constitution meant something different than it had for over a century, and reduced the standard to “facially neutral and generally applied,” which demoted free exercise of religion to the same level as any other government restriction on freedom.

In response, Congress and 21 states including Illinois (but not California, Nevada or New York, the subjects of the cases related to Elim) passed Religious Freedom Restoration Acts to restore the strict scrutiny standard.  In the following 30 years, these laws have been challenged and weakened, and the Church in 29 other states has gone without this important extra protection.

Several Justices; a potential majority, have recently signaled the desire to correct this error. Elim is the best current vehicle for the Court to restore this most important freedom.

Earlier in the pandemic, a number of challenges to government restriction on free exercise rights were presented in multiple federal circuits, and largely rejected (e.g., Calvary Chapel Dayton Valley, Nevada v. Sisolak).  Unwilling to intervene the U.S. Supreme Court denied appeals, even in an earlier version of Elim v. Pritzker (which has been renewed in this case).

“…this Court, which consists of only nine men and women, all of them successful lawyers who studied at Harvard or Yale Law School…Not a single evangelical Christian (a group that comprises about one quarter of Americans), or even a Protestant of any denomination.”  ~Justice Antonin Scalia, Dissent in Obergefell v. Hodges

The make-up of the High Court has changed for the better since Justice Scalia’s assertion that there was “not a single evangelical Christian,” (including himself), and even since this recent unwillingness to defend the Church’s Constitutional liberty amidst often onerous COVID restrictions.  To God’s glory, President Donald J. Trump was able to make 3 apparently sound appointments, including one protestant (Gorsuch, Episcopal – replacing Scalia) and possibly even an evangelical Catholic, in Justice Amy Barrett.

Accordingly, the U.S. Supreme Court has changed course in Roman Catholic Diocese of Brooklyn vs. Cuomo and Southbay United Pentecostal Church v. Newsom, from owing “significant deference to politically accountable officials,” to now even Chief Justice John Roberts (for a 6-3 majority in Southbay) conceding that such “deference, though broad, has its limits.”

The amicus meaning “friend,” (of the court) brief IFI has joined, encourages a ruling on several additional key issues, including:

When the righteous are in authority, the people rejoice;
but when a wicked man rules, the people groan. ~Proverbs 29:2

While the 6-3 majority coalition in Southbay is very fragmented, with five different opinions on the outcome (4 separate concurrences from the majority: Roberts, Thomas, Gorsuch, Alito, Kavanaugh, and Barrett, and one dissent by the usual liberal justices: Kagan, Sotomayor, and Breyer), it appears that 5 to 6 Justices may favor a return to the strict scrutiny standard.

In this case, these new Justices have already established a desperately needed check upon the ultra-liberal extremist control in the executive and legislative branches.  Also encouraging is the Chief Justice’s affirmation of his loyalty to the Constitutional text in refusal to preside over a proceeding to remove a former president from his former office.

Nonetheless, all but two of the members of this same Court have also shown a willingness to punt the Constitution in the face of pressure in the Texas v. Pennsylvania election challenge.

The Governor, using Illinois taxpayer dollars (i.e., the Attorney General’s office – they should be defending the people) to defend his restriction of their rights, has stalled this case at every turn by:

There will no doubt be numerous other attacks, both philosophical and political, every step of the way, against this Court, with a majority who has expressed a philosophy of solid textual interpretation of the Constitution, compatible with this Nation’s historic religious heritage.

This is major progress, but there is yet a long way to go for a Court which has for the past 48 (out of 245) years enshrined a right to murder children before they are born.

We must, must, must constantly uphold them in prayer.

Pray every day that: