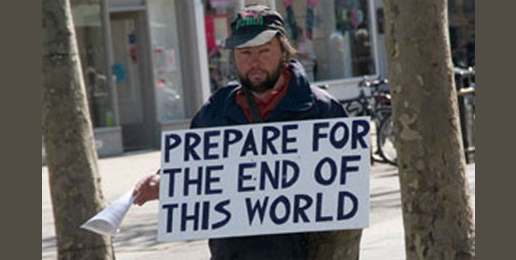 The United States of America was founded as an extraordinary experiment in freedom balanced by an almost universal worldview — the Christian or biblical worldview — which supplied inward moral constraints and rendered heavy handed government unnecessary and even repugnant.

But today, over 240 years later, America is a battlefield of opposing worldviews: secular humanists who have no transcendent truth to constrain them, versus people of faith who still embrace a biblical worldview. That biblical worldview includes exhortation to all manner of good and godly works and attitudes.

But what of The Left? Those with no moral compass who subscribe to the situational ethics school of thought? How can Progressive leaders and gatekeepers motivate their followers? Simple: fear.

People, in general, are either motivated by love or fear. Many times a healthy dose of fear is not a bad thing: ask the parent who loves their child unconditionally, yet understands the efficacy of fear of consequences.

Consider the notorieties of The Left and some of their chronicled pronouncements intended to evoke fear.

In January, 2006 — when promoting his Oscar-winning (yes, Oscar-winning) documentary, An Inconvenient Truth — Gore declared that unless we took “drastic measures” to reduce greenhouse gasses, the world would reach a “point of no return” in a mere ten years. He called it a “true planetary emergency.” Well, the ten years passed today, we’re still here, and the climate activists have postponed the apocalypse. Again.

In case you missed seeing Al’s movie, An Inconvenient Truth, here is the film’s synopsis:

Director Davis Guggenheim eloquently weaves the science of global warming with former Vice President Al Gore’s personal history and lifelong commitment to reversing the effects of global climate change in the most talked-about documentary of the year.

An audience and critical favorite, An Inconvenient Truth makes the compelling case that global warming is real, man-made, and its effects will be cataclysmic if we don’t act now. Gore presents a wide array of facts and information in a thoughtful and compelling way: often humorous, frequently emotional, and always fascinating. In the end, An Inconvenient Truth accomplishes what all great films should: it leaves the viewer shaken, involved and inspired.

Notice the hyperbolic language — cataclysmic — and the ultimate goal of the movie, “An Inconvenient Truth accomplishes what all great films should: it leaves the viewer shaken, involved and inspired.” Shaken. Indeed. Trembling with fear. Now that’s some motivation!

Filmmaker Michael Moore explores corporate greed, the global economic meltdown, and their disastrous effect on American lives. As he travels from the Heartland to the financial epicenter of New York and the halls of government in Washington, Moore delves into the price the country pays for its love of capitalism.

Political documentary filmmaker Michael Moore explores the circumstances that lead to the 1999 Columbine High School massacre and, more broadly, the proliferation of guns and the high homicide rate in America. In his trademark provocative fashion, Moore accosts Kmart corporate employees and pleads with them to stop selling bullets, investigates why Canada doesn’t have the same excessive rate of gun violence and questions actor Charlton Heston on his support of the National Rifle Association.

Leftist Moore crafts his documentaries to support his radical worldview: capitalism is unadulterated greed which will destroy America and the globe; guns and the NRA and Charlton Heston are evil and the cause of violence in America. Each of Moore’s films seek to instill fear in the audience.

Another purveyor of fear, Nobel Peace Prize Winning Barack Obama has the bully pulpit and the Progressive mindset to disseminate chilling, but fictitious, dictums. With the looming danger of Islamic terrorism, Obama dons his blinders and preaches:

Today there is no greater threat to our planet than climate change.

No challenge poses a greater threat to future generations than climate change.

It is [climate change], indeed, one of the greatest threats facing our planet today.

Even Veep Joe Biden gets in on the “scare-your-pants off with man-caused climate change doom” act:

Climate change is the threat multiplier.

Watch the video below with these and more scary quotes:

Now we all know we should live in fear and trembling of climate change, gun owners and capitalism. But wait, there’s more.

[Romney] said in the first hundred days, he’s going to let the big banks write their own rules — unchain Wall Street. They’re going to put y’all back in chains.

Thus Americans can add Romney and all Republicans to the list of phobias. But, don’t put down your pen — if you’re taking notes.

And when he spoke to a group of his wealthier Golden State backers at a San Francisco fund-raiser last Sunday, Barack Obama took a shot at explaining the yawning cultural gap that separates a Turkeyfoot from a Marin County.

“…And it’s not surprising then they get bitter, they cling to guns or religion or antipathy to people who aren’t like them or anti-immigrant sentiment or anti-trade sentiment as a way to explain their frustrations.”

So there you go. According to Obama, working class Americans are bitter, God-clinging, gun-clinging, xenophobics who should be objects of suspicion and loathing.

Our universities have been indoctrinating students for several generations with this nonsense, instilling fear of patriots and what were once considered solid American values. Colleges advertise “safe zones” and decry “micro-aggression and trigger warnings.”

Oklahoma Wesleyan University President, Dr. Everett Piper, wrote an excellent rebuttal to all the PC/Lefty nonsense in his 2015 article, This is Not a Day Care. It’s a University!:

At OKWU, we teach you to be selfless rather than self-centered. We are more interested in you practicing personal forgiveness than political revenge. We want you to model interpersonal reconciliation rather than foment personal conflict. We believe the content of your character is more important than the color of your skin. We don’t believe that you have been victimized every time you feel guilty and we don’t issue “trigger warnings” before altar calls.

Oklahoma Wesleyan is not a “safe place”, but rather, a place to learn: to learn that life isn’t about you, but about others; that the bad feeling you have while listening to a sermon is called guilt; that the way to address it is to repent of everything that’s wrong with you rather than blame others for everything that’s wrong with them. This is a place where you will quickly learn that you need to grow up.

This is not a day care. This is a university.

Let’s face it, The Left is motivated by, and only by, feelings — not facts nor solid intellectual argument. With a worldview wherein man is both intrinsically good and, strangely, the enemy of the planet, the best mode of motivation is fear. Pure, unsubstantiated fear.

Contrast that with the Judeo-Christian, the biblical, worldview. Those who revere the God of the Bible, the God of Abraham, Isaac, and Jacob, those who read the Bible and try to live out its precepts. Those people of faith believe in right and wrong, in sin and mercy and grace. And they believe in absolute, transcendent truth.

If The Left motivates through fear, how does The Right, Conservatives of faith, motivate? Love.

There are over 360 passages in the Bible which tells us to “fear not.” And with great clarity the apostle John writes:

There is no fear in love; but perfect love casts out fear, because fear involves torment. But he who fears has not been made perfect in love. 1 John 4:18

We are fragile mortals, given to fears of every sort. We have a built-in insecurity that no amount of whistling in the dark can mollify. We seek assurance concerning the things that frighten us the most.

The prohibition uttered more frequently than any other by our Lord is the command, “Fear not …” He said this so often to His disciples and others He encountered that it almost came to sound like a greeting. Where most people greet others by saying “Hi” or “Hello,” the first words of Jesus very often were “Fear not.”

Our culture may be a war zone as we wrestle against principalities and powers who wield fear as a weapon of control.

The antidote for that fear is truth and love. We must be apologists of truth, striking down the nonsense of the fear peddlers. As John Mark penned:

And the second is like, namely this, Thou shalt love thy neighbour as thyself. There is none other commandment greater than these.

Sorry fearmongers, you don’t have a chance of winning: perfect love casts out fear.