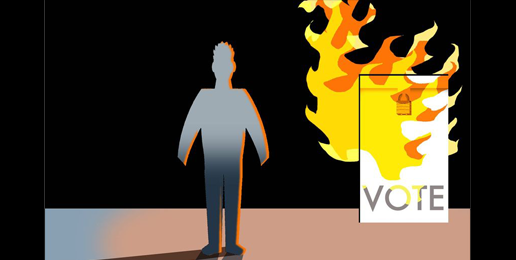 May God Have Mercy Upon Us and Our Troubled Country
Written By Robert Knight   |   12.07.20
PRINT

With our nation on a razor’s edge, the days are getting shorter — and darker.

In fact, the winter solstice is coming in a couple of weeks on Dec. 21, marking the shortest day on the calendar and thus the darkest time of the year.

More than ever, it’s better to look to the heavenly light of Bethlehem instead of, say, the gaslight emanating from the pixels of a profoundly corrupt media.

A random sampling of news every day can inflict whiplash. Conservative outlets report, in detail, numerous documented allegations of vote fraud that should invalidate Joe Biden’s reported victory in most of the battleground states.

During the same news cycle, the major networks and papers like The Washington Post and The New York Times assure us over and over that there is “no evidence.” Because the evidence is piling up, some have taken to adding an adjective, saying there’s no evidence of “systemic fraud.”

In other words, don’t believe your lying eyes. Their intention is to ensure that even if compelling evidence is revealed, the sheer weight of nonstop propaganda will frighten legislators and judges to head for the tall grass and decline to do their duty — even the U.S. Supreme Court.

More than ever, we need to pray that truth will prevail, that justice will be done and that God will have undeserved mercy upon us and our troubled country.

On the bright side, the dark days of December are a perfect time to celebrate the Lord arriving in the form of a baby 2,000 years ago as the greatest gift to humanity ever given. Jesus brought light, life and love and the promise of eternal salvation to a very dark world.

It’s why we celebrate by putting up Christmas lights, giving gifts and singing carols.

The most significant event in history evokes different feelings depending on one’s heart condition. In 1868, Phillips Brooks wrote the lyrics of a beloved carol that resound to this day.

The last two lines of the first verse indicate that not everyone would be happy that the Lord would engage His creation so personally:

O little town of Bethlehem,
How still we see thee lie!
Above thy deep and dreamless sleep
The silent stars go by;
Yet in the dark street shineth
The everlasting Light;
The hopes and fears of all the years
Are met in thee tonight.

Fears? Yes. If Christ is Who He says He is, then those who reject Him are choosing misery over hope, consciously or not. They brush away evidence of God’s love, relegating stories of redemption to delusion, coincidence or even ultimate self-interest.

Theologian A.W. Tozer challenged the idea of God as an absentee creator, a “Blind Watchmaker,” as prominent atheist Richard Dawkins titled his 1986 book:

Be assured that God did not create life and toss it from Him like some petulant artist disappointed with His work. All life is in Him and out of Him, flowing from Him and returning to Him again, a moving indivisible sea of which He is the fountainhead.

It may sound a lot like The Force in “Star Wars,” but the difference is stark. There is no “dark side” in God, Who is indivisible, omnipotent and all loving. We’ll never know this side of eternity why evil exists. Or why God’s love is so deep that He sent His only Son to die on our behalf. But nothing should stop us from being grateful for the gift of life itself and all that sustains it.

For Christ is born of Mary,
And fathered all above,
While mortals sleep, the angels keep
Their watch of wondering love.
O morning stars, together
Proclaim the holy birth
And praises sing to God, the King,
And peace to men on earth.

The reason for the season speaks to all people, even unbelievers. The beauty of Christmas transcends doubts and calms hearts. It’s hard to be callous toward Salvation Army bellringers tending their red kettles or to shut off one’s heart upon hearing the melodies of carols that pierce the soul and offer hope. Timeless, classic movies like “It’s a Wonderful Life” can elicit tears from even the crustiest viewers.

How silently, how silently,
The wondrous Gift is given!
So God imparts to human hearts
The blessings of His heaven.
No ear may hear His coming,
But in this world of sin,
Where meek souls will receive Him still,
The dear Christ enters in.

In our culture, we’re told, over and over, that meekness is weakness; that looking out for No. 1 is the smartest way to live and that only fools bend their knee to an invisible God. But God-inspired goodness and truth are the most disarming forces on Earth.

In 1994, Mother Teresa spoke at a prayer breakfast, flanked by President Bill and Hillary Clinton and Vice President Al and Tipper Gore.  The two couples sat stone-faced as she proposed a “culture of life” and called abortion evil. At one point, Mr. Clinton’s hand was shaking nervously, apparently in reaction to the spiritual strength in this tiny, fearless woman.

Whatever happens with the election, we need to keep our eyes on the God Who promises not only salvation and mercy but courage to face the future and act accordingly.

Robert Knight is a contributor to The Washington Times, where this article was originally published. His website is roberthknight.com.