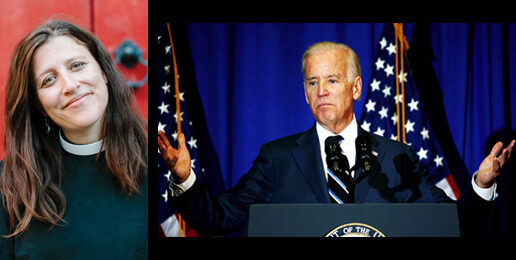 A comment from Tish Harrison Warren writing in and for the increasingly disappointing Christianity Today on Jan. 7, 2021 merits revisiting now that the damage Donald Trump voters predicted if Joe Biden were elected is becoming a reality. Warren wrote,

So, should responsibility for the violence in the streets in 2020 and 2021 be laid in part at the feet of evangelical leaders and/or white Christians who support BLM and the teaching of Critical Race Theory in government schools?

Should the violence in Planned Parenthood abattoirs be laid at the feet of evangelical leaders and white Christians who voted for Biden, who supports abortion through all nine months of pregnancy, or who voted for any Democrat in the past 50 years?

Should the use of taxpayer funds for the slaughter of tiny humans be laid at the feet of white Christians who voted for Biden?

Should the catastrophe of overcrowded plastic pods of unaccompanied migrant children be laid at the feet of every evangelical who voted for Biden?

Should the destruction of the black family caused by sixty years of Democrat policies be laid at the feet of evangelical leaders and white Christians who supported those social welfare policies?

Should the sexual integration of women’s and children’s private spaces be laid at the feet of evangelical leaders and white Christians who ushered in and applauded Biden’s presidency?

Should the diminution of speech and religious free exercise protections for theologically orthodox Christians be laid at the feet of evangelical leaders and white Christians who have supported Democrats for the past 20 years?

Should the legal recognition of homoerotic relationships as “marriages,” which robs children of mothers or fathers be laid at the feet of evangelical leaders and white Christians who have supported Democrats?

Should the responsibility for closing Christian adoption agencies that won’t place children in the homes of homosexuals in part be laid at the feet of evangelical leaders and white Christians who voted for Democrats?

Should responsibility for drag Queen story hours and the proselytizing of children into the “trans” cult be laid in part at the feet of evangelical and white Christians who support Democrats?

The answers to my questions are obviously yes. I would add, however, that responsibility for the facilitation of any of these grievous sins that harm our neighbors knows no skin color.

For more than four years, Trump has shown that he is more than willing to say any lie, ignore any standard of decency, and bring any amount of violence and division to shore up his own power.

Really? Trump would say “any” lie, ignore “any” standard, and bring “any” amount of violence and division to shore up his own power? How would Warren even begin to prove such absolute claims?

What does Warren think about Biden’s willingness to lie, ignore standards of decency, and foment division to shore up his own political power for—not four years—but four decades? Surely, Warren knows about Biden’s repeated plagiarizing, and about the whoppers he told about his college career, law school performance, and fictional arrest in Soweto, South Africa.

What does Warren think about Biden’s infamous divisive and deceitful 2012 claim that a Romney administration would “put y’all back in chains”?

What standard of decency did Biden apply when he lied to the American people during the campaign, falsely claiming he knew nothing about his ne’er-do-well son’s sordid influence-peddling business deals with America’s foremost enemy?

What standard of decency did Biden—who professes to be a Christian—apply when he reversed his opposition to federal funding of human slaughter?

What standard of decency did Biden apply when he learned and kept secret that the Russia collusion story was a DNC/Hillary Clinton hoax  concocted to distract the public from revisiting Hillary Clinton’s email server scandal during the 2016 campaign?

What standard of decency did Biden apply when he reneged on his commitment to support President Reagan’s nomination of the extraordinary Robert Bork to the U.S. Supreme Court?

And what standard of decency led Joe Biden to suggest falsely on multiple occasions that the truck driver whose truck hit and killed Biden’s daughter and first wife was drunk when it appears Neilia Biden caused the collision:

[C]overage in the newspapers at the time made clear that fault was not in question. For whatever reason, Neilia Biden, who was holding the baby, ended up in the right of way of Dunn’s truck coming down a long hill.” She had a stop sign and Dunn did not.

In so doing, not only were better policies passed and better judges appointed but also the depth and breadth of the wickedness of the left in Congress, the press, corporate America, and Big Tech were exposed.

And many voted for Trump in 2020 for the same reasons. Many Christians knew that Biden is not only ethically vacuous but also that he would promote policies that would increase human suffering and diminish fundamental civil liberties.

Many conservatives who dreaded and worked tirelessly to prevent a Biden win are seeing their worst fears realized and then some.

The Horde has been lurking unmolested for over half a century in Ivory Towers, spreading their brain-eating critical theories into young minds, thereby growing the Horde’s next generation.

Late last spring the younger Horde rampaged through our streets battering, burning, and burgling, while screeching Newspeakian lies about equity and justice.

Horde justice has just been meted out, but a pound of Derek Chauvin’s flesh cannot satisfy the blood and power lust of the fascistic horde.

Justice for the Horde has nothing to do with holding individuals accountable to a fixed legal standard. It’s about mob retribution exacted on anyone who represents the alleged oppressor group for crimes committed by others decades or even centuries ago.

Horde justice is not colorblind, and it’s not just.

Let me just say for the record, I support … looting the damn Dollar Tree. I support … looting the Advanced Auto Parts. I remember last year they looted Target. I support all that sh*t. Loot all that sh*t. You know why? Because black people, and marginalized and oppressed people could loot every store in this whole f*cking country for 200 f*cking years, and it would not even come close to the debt America owes us.

Which party produces the likes of Kim Brown and the Horde?