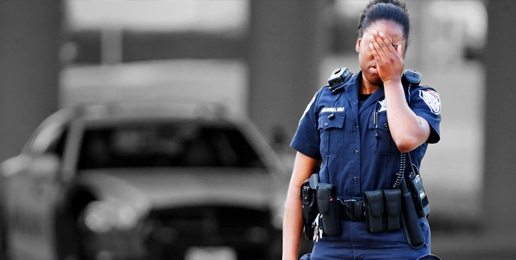 It seems that America is now locked in an endless loop of tension and violence. Many disaffected Americans are railing out at a government they see as being abusive and vindictive. Movements like “Black Lives Matter” have pitted some African-American (and other) citizens against police officers, in a vicious cycle of street demonstrations and police force.

In some ways, these tensions are not new, and can be traced all the way to the American Civil War, through segregation, the Civil Rights Movement up to today. Americans have always been deeply divided on issues of race, and equal rights.

Now, police are being targeted in random shootings by those who feel anger at what they view as a system of oppression and tyranny.

The question is, where will all of this end?

There are really two facets to this situation that must be explored if we hope to understand the roots of this predicament.

What very few people stop to consider is the roots of all so-called “racial” prejudice. As Bible-believing Christians, we believe that God “has made from one blood every nation of men to dwell on all the face of the earth” (Acts 17:26). From one man, and one woman, all of the more than seven billion people on planet earth have descended. That makes all of us related by blood. We are all part of the same race: The Human Race!

Racial prejudice comes mainly out of evolutionary teachings. If you study the roots of the Eugenics movement, you will see that it is based in the view that some people groups are more highly evolved than others. Very few people know the full title of Charles Darwin’s ground-breaking 1859 book on evolution. It is called, “On Origin of Species, by Way of Natural Selection, or the Preservation of Favoured Races in the Struggle for Life.”

Over 150 years of evolutionary teaching has saturated our culture, and has convinced many that we must struggle for the strongest races to survive. The solution to prejudice is found in the hope offered in the gospel of Jesus Christ. Not only are we all equal in creation, and therefore equal in value, the Apostle Paul declared, “There is neither Jew nor Greek, there is neither slave nor free, there is no male and female, for you are all one in Christ Jesus.” (Gal. 3:28).

The other consideration in this situation is the age-old struggle between a desire for freedom from authority (on the one hand) and a demand for supreme authority by the State (on the other). This tension has always existed in every society. There is a rogue spirit in humankind that wants to be free from the bonds of restriction and law. But a lawless society, where everyone makes up their own rules (moral relativism), and where people’s passions run unchecked (hedonism), is not tenable. No civilization can bear up under the weight of an antinomian mindset (a believe that all law is bad).

When a culture begins to shake itself from moral law, it soon finds itself at the mercy of an ever-encroaching government that seeks to provide stability and regulation. The response to anarchy is always totalitarianism, and the response to tyranny is almost always rebellion, which leads to the cycle of more tyranny.

This situation is only remedied when people recognize that there is a universal moral law that exists outside of themselves, and to which they are all subservient. Once again, we find the solution to both extremes within the teachings of Jesus of Nazareth. The entire “Sermon on the Mount,” puts external law in the only place where it ultimately works; inside the human heart.

Until the evil of the heart is addressed, we are simply trying to put a cultural bandage on a proverbial brain tumor. No amount of political posturing will make bad people want to do good. It is only when the human heart is changed by love that we will hope to see citizens desire to do good, rather than harm, to their neighbor. It is only when we forgive, rather than seeking another eye or tooth in retaliation for harm, that we can end the vicious cycle of bloodshed and violence.

Ultimately, Christianity provides a totally unique remedy in the history of ideas. Every other worldview teaches that we must solve our own problems through human effort and initiative. Christianity, in contrast, presents us as the heart of the problem, not the solution. The Bible insists that it is only through humility and repentance that we will find healing for our own souls, and then be able to extend that grace and healing to others.

May God grant us that grace of repentance and humility as we seek to walk through the turbulent days that lie ahead.

The Failure of Government-Run Schools
b
a
x
r