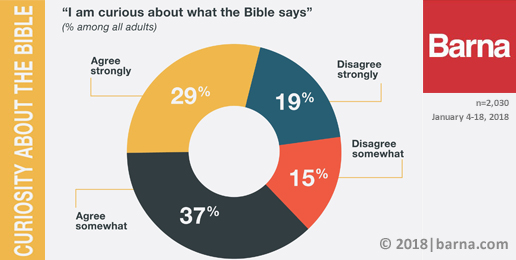 Barna Research Finds Many Americans Still Read Bible, But What Are They Learning?
Written By   |   08.23.18
PRINT

Nearly half of Americans continue to be “Bible users,” according to the State of the Bible 2018 report published by Barna research in July in partnership with the American Bible Society.

The Barna Group defines “Bible users” as “individuals who read, listen to or pray with the Bible on their own at least 3-4 times a year, outside of a church service or church event.”

The study found that 14 percent of adults use the Bible daily, while 13 percent use it several times a week, 8 percent once a week, 6 percent about once a month and 8 percent three to four times a year. The report notes that “Bible use has remained relatively consistent since 2011.”

Those most likely to engage with the Bible include Baby Boomers, Southerners, and those who live in cities and small towns or rural areas as opposed to the suburbs. Print versions still have strong appeal, but more are also turning to digital and audio forms and podcasts.

Nearly six in 10 adults believe the Bible has transformed their lives, with married people and those with children under 18 being more likely to say so, according to the report.

The introduction to the report strikes a hopeful note, saying “the results show that, despite shifting cultural trends, Americans still read the Word, and it remains a powerful, transformative tool in their life.”

However, the report comes at a time of growing support for changes in secular culture that are uprooting America’s Christian influence, with some of that erosion happening within the church itself. While many Americans may say they still pick up the Bible, some Christian leaders are warning that their understanding of it is superficial and leading to greater compromise with the culture.

Last year, the Pew Research Center released a report saying that 62 percent of Americans now support same-sex marriage, including 35 percent of white evangelical Protestants. Support is higher – at 47 percent – among white evangelicals born after 1964. A Gallup poll released earlier this year found that 67 percent of all Americans now support same-sex marriage, up from 27 percent in 1996, when Gallup first posed the question.

The Barna Group in other studies in recent years has drawn attention to cultural changes affecting the church. In 2010, Barna research released a report on “how the religious environment in the U.S. is morphing into something new.” The report said the church is becoming “less theologically literate” and that “growing numbers of people are less interested in spiritual principles and more desirous of learning pragmatic solutions for life.” The report also sounded an alarm about “the postmodern insistence on tolerance”:

Our biblical illiteracy and lack of spiritual confidence has caused Americans to avoid making discerning choices for fear of being labeled judgmental. The result is a Church that has become tolerant of a vast array of morally and spiritually dubious behaviors and philosophies. This increased leniency is made possible by the very limited accountability that occurs within the body of Christ. There are fewer and fewer issues that Christians believe churches should be dogmatic about. The idea of love has been redefined to mean the absence of conflict and confrontation, as if there are no moral absolutes that are worth fighting for. That may not be surprising in a Church in which a minority believes there are moral absolutes dictated by the scriptures.

The challenge today is for Christian leaders to achieve the delicate balance between representing truth and acting in love. The challenge for every Christian in the U.S. is to know his/her faith well enough to understand which fights are worth fighting, and which stands are non-negotiable. There is a place for tolerance in Christianity; knowing when and where to draw the line appears to perplex a growing proportion of Christians in this age of tolerance.

In 2016, Al Mohler, president of the Southern Baptist Theological Seminary, published an essay calling for the church to address the problem of biblical illiteracy. His essay cited Barna research that found that 60 percent of Americans couldn’t name five of the Ten Commandments. Mohler wrote:

Christians who lack biblical knowledge are the products of churches that marginalize biblical knowledge. Bible teaching now often accounts for only a diminishing fraction of the local congregation’s time and attention. The move to small group ministry has certainly increased opportunities for fellowship, but many of these groups never get beyond superficial Bible study.

Even the pulpit has been sidelined in many congregations. Preaching has taken a back seat to other concerns in corporate worship. The centrality of biblical preaching to the formation of disciples is lost, and Christian ignorance leads to Christian indolence and worse.