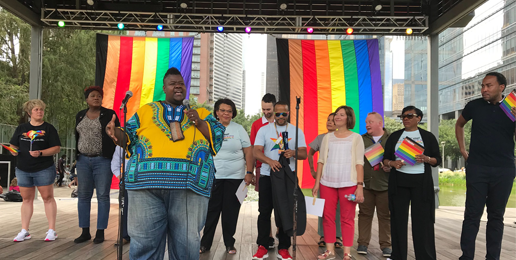 NEA in Houston, July 2019
Wait Till You See What the National Education Association Is Up To
Written By Laurie Higgins   |   07.16.19
PRINT

The first weekend in July, the National Education Association (NEA) held its annual Representative Assembly in Houston, an assembly consisting of “nearly 7,000 delegates.” The National Education Association is a “progressive” political activist organization that masquerades—er, I mean, identifies as an educational organization. The NEA’s Code of Ethics says, among other things, this:

The educator… recognizes the supreme importance of the pursuit of truth, devotion to excellence, and the nurture of the democratic principles. Essential to these goals is the protection of freedom to learn…. The educator therefore works to stimulate the spirit of inquiry, the acquisition of knowledge and understanding, and the thoughtful formulation of worthy goals. In fulfillment of the obligation to the student, the educator… Shall not unreasonably deny the student’s access to varying points of view.

Read these “New Business Items” just passed by the NEA, and see if you believe the NEA honors its Code of Ethics:

One interesting membership change was passed as well. Two-thirds of the delegates “voted to amend the national teachers’ union’s constitution” to allow “non-educators” to become members, which in turn allows them to “donate to the NEA’s political action committee.” Such “public education allies” won’t “be able to vote, nominate candidates for elected office, or hold governance positions within the union.” They’ll only be able to donate money, thereby strengthening the power of “progressives” within the NEA. If by becoming members, non-educators could vote and nominate candidates, conservatives would have reason to join, because membership might enable them to weaken the power of “progressives” within the NEA. But if membership entitles non-educators only to donate money, the effect will be to strengthen the existing power structure.

The NEA is not an educational organization. It is not an organization committed to the full, free, and critical examination of diverse ideas. It’s a Leftist, political advocacy organization led by presumptuous culturally regressive dogmatists who have arrogated to themselves the right to use government schools to impose their arguable assumptions/worldview on other people’s children. The NEA and its ideological allies have transformed education into indoctrination.

The systemic anti-conservative bias deeply rooted in the sinews of government schools make them places that conservatives—especially Christians—should exit immediately if not sooner. And this will require the assistance of churches. Many families can neither homeschool nor afford existing private schools. Churches must be creative and find ways to enable their members to exit government schools. Churches should make funds available to enable members to send their children to existing private schools and/or create affordable private schools.

There are many ways the church can facilitate the training up of children in the way they should go, including tapping one of our greatest resources: retirees who, mature in their faith and equipped with a lifetime of diverse experiences and acquired knowledge, can and should help in this crucial endeavor. Retirees who are in good health should actively pursue ways to help in this effort. I will close with this legendary admonition from theologian and retired pastor, John Piper:

I tell you what a tragedy is. I’ll read to you from Reader’s Digest what a tragedy is. “Bob and Penny . . . took early retirement from their jobs in the Northeast five years ago when he was 59 and she was 51. Now they live in Punta Gorda, Florida, where they cruise on their thirty foot trawler, playing softball and collecting shells.”

That’s a tragedy. And people today are spending billions of dollars to persuade you to embrace that tragic dream. And I get forty minutes to plead with you: don’t buy it. With all my heart I plead with you: don’t buy that dream. The American Dream: a nice house, a nice car, a nice job, a nice family, a nice retirement, collecting shells as the last chapter before you stand before the Creator of the universe to give an account of what you did: “Here it is Lord — my shell collection! And I’ve got a nice swing, and look at my boat!”

Let’s all start working for children in earnest, with courage, and with a willingness to suffer for Christ and his Kingdom.

ANOTHER “Woke” Education Law Just Signed by Gov. Pritzker
b
a
x
r