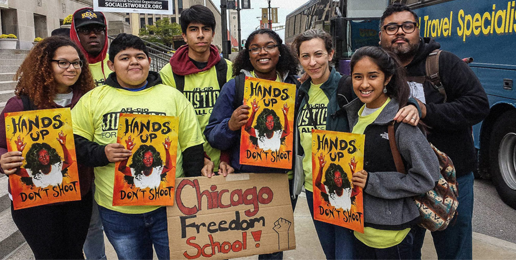 I hate to be the bearer of bad tidings to hardworking Illinoisans—which, by definition, excludes members of the Chicago Teachers’ Union—but there’s more news on the education front. Lefty swamp creatures in Springfield wallowing in their own presumptuousness and power have yet more changes in store for the unfortunate Illinois school children who haven’t yet been freed from the re-education camps that self-identify as schools.

The newest offenses from Springfield are buried in the thousands of words of a new bill just signed into law by Governor J. B. Pritzker on Monday March 8, 2021.

The first offense is providing general revenue funds to be used for the creation of a network of Chicago Freedom Schools (CFS) which will be breeding grounds for leftist social activists. This is an official photo from the school. Currently, Chicago has one Freedom School—a non-profit organization—which opened its doors to budding young social justice warriors in 2007. But leftists believe that one CFS and all public schools are not creating nearly enough community agitators. 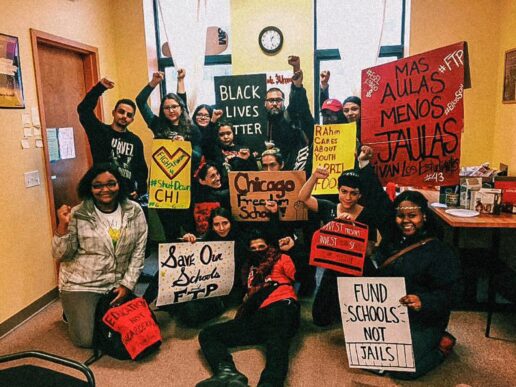 The State Board of Education shall establish a Freedom School network to supplement the learning taking place in public schools by creating a 6-week summer program. … A Freedom School shall intentionally and imaginatively implement strategies that focus on … Racial justice and equity. … The Freedom Schools Fund is created as a special fund in the State treasury. the [sic] Fund shall consist of appropriations from the General Revenue Fund, grant funds from the federal government, and donations from educational and private foundations.

CFS uses social justice and anti-oppression practices to work to transform oppression into liberation by naming, analyzing, implementing and teaching actions that dismantle systems of supremacy that give power and privileges to some at the expense of others.

CFS invites “young leaders of color ages 13-17” who are “passionate about social justice” to apply for a Freedom Fellowship in order to build “community organizing skills” and “become community change-makers” by exploring current issues such as racism and climate change in order to “develop skills” for “dismantling injustice.” I’m not sure, but I think limiting government-subsidized fellowships to leaders “of color” might be racist and violate anti-discrimination law.

The CFS’s Summer Leadership Institute studies “issues of systemic oppression like racism, heterosexism, food justice, the school to prison pipelines, sexism, and more.” Something tells me that discussions of the pipeline to prison don’t include discussions of premarital sex, out-of-wedlock pregnancy, and fatherlessness. 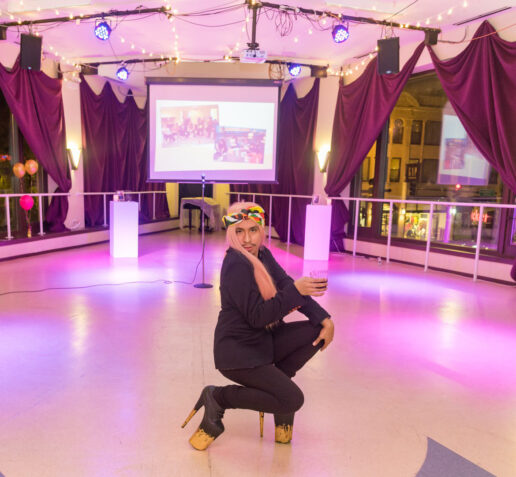 Let your fingers do the walking right on over to the Chicago Freedom School’s Facebook page and take a gander at the photos of the school that your taxes will now be used to replicate all around Chicago. Check out the photos of their November 2019 fundraiser titled Moments of Justice: Unmasking Our Ancestral Gifts. By “unmasking,” they evidently mean unclothing, and by “gifts,” they evidently mean—well, you can see for yourself.

The man in the furry black vest is homosexual activist Tony Alverado-Rivera who is the executive director of Chicago’s only Freedom School. He wants to defund police, abolish ICE, and remove Chicago Police from dangerous Chicago schools. CFS supports “trans”-cultism and BLM, and offers workshops to help other leftist agitators build “social justice practices” into their schools, which presumably includes public schools.

And now, thanks to leftists in Springfield and the taxes of Illinoisans, Chicago won’t have just one ideological factory churning out activists; Illinois will have an entire network. And to make matters worse, it appears the law grants carte blanche to the reliably leftist Illinois State Board of Education to implement the Freedom Schools project for creating social justice change-agents:

The State Board of Education may adopt any rules necessary to implement this Section. (emphasis added)

The new law also includes a change in the school code regarding what must be taught during Black History Month. The school code already required every elementary, middle, and high school to teach a unit that addresses the following:

[T]he events of Black History, including the history of the African slave trade, slavery in America, and the vestiges of slavery in this country. These events shall include not only the contributions made by individual African-Americans in government and in the arts, humanities and sciences to the economic, cultural and political development of the United States and Africa, but also the socio-economic struggle which African-Americans experienced collectively in striving to achieve fair and equal treatment under the laws of this nation.

Further, existing law said, “The studying of this material shall [must] constitute an affirmation by students of their commitment to respect the dignity of all races and peoples and to forever eschew every form of discrimination in their lives and careers.”

While many Illinois schools haven’t yet been able through the study of “material” to get students to affirm the basics of reading, writing, and arithmetic, lawmakers think they will be able to get them to “forever eschew every form of discrimination in their lives and careers.” Wowzer!

But, the social justice despots who rule Illinois are nowhere near done tinkering with laws in order to manipulate the minds of other people’s children. The new law adds the following to everything else that must be taught to Illinois children in order to satiate leftists who want to use public schools to turn children’s hearts against America and turn children into social justice warriors. Now, the Black History unit will have to include,

This change to the study of black history constitutes a means to weasel controversial 1619 Project ideas into curricula without Illinoisans realizing it.

Classroom time does not permit any public K-12 school to teach the history of any country or identity group comprehensively. The partisan view that K-12 schools should teach about “the pre-enslavement of Black people from 3,000 BCE to AD 1619” is both absurd and doctrinaire. Why just the history of blacks from that period? And why those specific dates? Well, we know why the dates. They’re lifted straight out of the much-condemned 1619 Project written by non-historian New York Times writer /social justice agitator Nikole Hannah-Jones.

If public schools are going to mandate the “study of the reasons why Black people came to be enslaved,” are they going to require that students study those reasons in context of the worldwide history of slavery and the participation of African blacks in the slave trade? Are they going to make clear that more black slaves were sold to Europe, South America, and the Caribbean than to the United States? Are they going to require students study the history of the role of Christianity in the abolition movement? Will resources used include those by conservative blacks like Carol Swain, Thomas Sowell, Shelby Steele, and John McWhorter?

Doubtful, because the goal of leftists is not historical accuracy or exploring diverse ideas. Their goal is partisan politics.

There will be no satiating the swamp creatures in Springfield who, in cahoots with leftist “educators,” are drowning government schools in leftist ideology, thereby turning education into indoctrination and Illinois children into leftist activists.