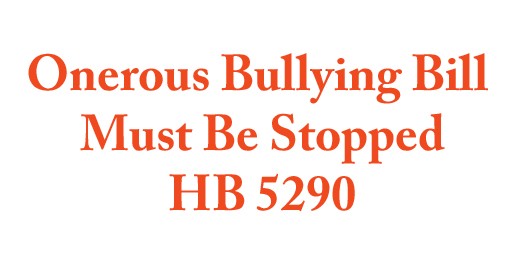 IFI readers, please, whether you have children in schools or not, take seriously the assault on the minds and consciences of students, and take action against the newly amended and completely unnecessary anti-bullying bill: HB 5290.

IFI has requested that a provision be added that would guarantee students and school employees the right to opt out of any programs or activities that promote ideas that conflict with their personal or religious beliefs. If such a provision were added, IFI has agreed to adopt a neutral position on the bill, but so far the bill’s sponsors and the ACLU have steadfastly refused to add an opt-out provision.

It has already passed in the House. Please contact your state senator and ask him or her to oppose the bill unless this opt-out provision is included:

No student or school employee will be required to attend or participate in any anti-bullying program, activity, or assembly that infringes upon free expression or contradicts personal or religious beliefs.

If someone has a different belief than you and they explain that belief and express their belief, and express it in a hard way, but doesn’t put a hand on the person, could that be considered bullying?

I don’t believe it does. This would have to rise to the level of harassment and torment.

A single statement, I don’t think, can be reasonably predicted to have the following outcome. There is no reasonable person under any standard of law that would say one statement, one single statement that “I disagree with you” would put me at fear of physical harm. So, I don’t believe that your situation would rise to that level. Bullying is about behavior, not belief.

What Cassidy “thinks” and “believes” about how this law would be applied in schools is hardly reassuring.

In addition, she is either ignorant of the text of the existing law or deceitful. The law passed in 2010 does not define bullying as only “harassment,” “torment,” or being in “fear of physical harm” as Cassidy implies in her response to Bost. The law defines bullying as any severe or pervasive physical or verbal act or conduct, including communications made in writing or electronically that can be reasonably expected to place the student in fear of their person or property, cause a substantial detrimental effect to their physical or mental health, or substantially interfere with their academic performance or ability to participate in school activities.

Since the law does not state — as it should — that bullying acts must be severe and pervasive, a single act, including a verbal act, could be construed as constituting bullying. In addition, a single verbal act that is expected to interfere with academic performance or a student’s ability to participate in school activities could be construed as bullying even if it does not constitute harassment or torment, or “put a student in fear of physical harm.”

It should have been obvious to Cassidy that Bost was not asking if students would be permitted to say literally, “I disagree with you.” He was asking if a student who expresses ideas or beliefs that another student finds offensive could be accused of bullying.

For example, if a student were to say in a classroom discussion or to her friends in the cafeteria, “Homosexual acts are perverted,” or “Gays shouldn’t be allowed to adopt,” or “When men have sex with men, they degrade themselves,” could she be accused of bullying? Could someone claim that those verbal acts caused a “detrimental effect to his mental health”?

What does your bill add to this [existing anti-bullying] law?

According to Cassidy, 20 schools have “inadequate” bullying policy, but the law passed in 2010 does not mandate any particular policy formulation, so perhaps the very liberal Task Force and Cassidy may not view the policies of these 20 unnamed school districts as adequate, but as long as they have even a one-sentence policy, they’re in compliance with the law. Moreover, no one provided any evidence that these schools’ bullying policies have been problematic. To reiterate, there are about 879 public school districts in Illinois and dozens more non-public, non-sectarian schools to which existing law applies. Of those, only 3 districts, according to Cassidy, have not complied with the law.

State Representative Dennis Reboletti (R-Elmhurst) suggested that the Illinois State Board of Education(ISBE) should be working with the districts that have no policy, rather than passing yet another law. He suggested that the judgment of “inadequacy” seems subjective and the decisions regarding “adequacy” are best left to communities and their elected school boards.

Bost’s question about what HB 5290 adds to current existing law is critical. Despite Cassidy’s obfuscation to the contrary, HB 5290 adds nothing. No school is required to adopt any of HB 5290’s recommendations.

State Rep. Lou Lang (D-Skokie) asked Cassidy if the State Board of Education has made “an effort with those 23 school districts to resolve those issues [no or inadequate bullying policy]. Cassidy responded awkwardly in the passive voice: “The desire was to have a more fully defined guideline.”

Second, who precisely is the person or persons whose identity Cassidy craftily concealed by using the passive voice. Who exactly desired “to have a more fully defined guideline for the school districts”? Suspicious minds would guess that the desirers were Cassidy; the homosexual activist groups Equality Illinois and the Illinois Safe Schools Alliance; and the ACLU of Illinois.

Imagine we’re playing the childhood game of “Red Light, Green Light.” Homosexual activists and their ideological allies see conservatives with their backs turned away from the game and know they have the green light. Some will career wildly toward their goal of total societal transformation, while others take baby steps, hoping no one will notice until it’s too late.

Don’t be fooled again. HB 5290 is not about bullying prevention. If we’re going to allow this unnecessary, partisan bill to pass, at least make sure it includes an opt-out for students and school employees.