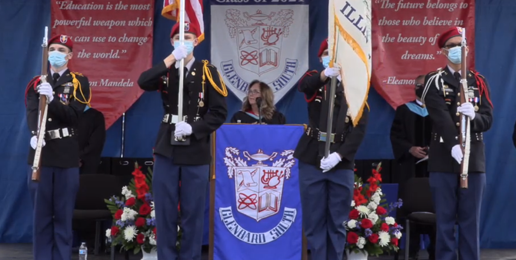 This past Saturday May 22,2021, the retiring principal of Glenbard South High School in Glen Ellyn, Illinois decided to ruin the graduation ceremony of seniors by using it to express her political views. Principal Sandra Coughlin led the families and students in the Pledge of Allegiance but notably omitted the words “of the United States of America” and “under God,” generating audible outrage from the attendees and creating division in what should have been a time of unity and joy.

What is uniquely galling is that Coughlin chose to ruin a special family milestone—one made more special this year by the trials suffered by students and their loved ones because of the pandemic and the selfishness of teachers’ unions—in order to get her two worthless cents in. She demonstrated a degree of self-righteousness and self-absorption remarkable even for leftist change-agents who identify as “educators.”

This was not an act of inclusivity or kindness. It was the rhetorical equivalent of giving every American of every race, ethnicity, nation of origin, and religion who loves this country and its principles the middle finger.

It was a brazen insult hurled at everyone in the audience who believes that all men and women are endowed with unalienable rights by their Creator.

If Coughlin has moral or religious reasons for her unwillingness to lead the Pledge of Allegiance properly, she should have recused herself from the ceremonial duty and asked another Glenbard South administrator to perform the honor. Revising the Pledge to suit her political fancy was an act of presumptuousness and disrespect for students and their loved ones.

Coughlin taught all children present at Saturday’s commencement ceremony an unfortunate lesson about incivility and thanklessness. Parents had no choice but to turn her regrettable example into a teachable moment on how not to abuse power and position.

In choosing this particular moment and this year— when classes are over and just one month before she retires—to express her disdain for America and God, she also revealed her cowardice. She performed her act of rebellion and disrespect for every student, every family, and every taxpayer at a time when she will suffer no consequences. It was the ultimate act of contempt: On her way out the door, she insulted those who will now have to subsidize her hefty pension.

“Retiring Glenbard South principal Sandra Coughlin has issued an apology and statement saying that due to being “emotional and anxious,” she “accidentally omitted” the words “of the United States of America” and “Under God” when she recited the Pledge of Allegiance at Saturday’ commencement ceremony.

Further, she said, “I would never intentionally disrespect our great country, our flag, nor the men and women who have done so much to protect and defend our freedom.”

She claims that “After 30 years in education, and countless times reciting the Pledge of Allegiance, I lost track and fumbled” those particular words.

IFI hopes this statement is true.