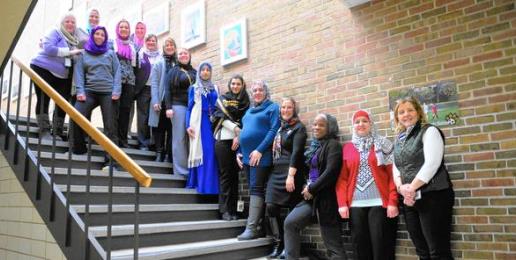 February 1, 2013 marked the first annual World Hijab Day, which was started by Nazma Khan, who emigrated from Bangladesh to the U.S. when she was 11 years old.

“Social activist” Khan tells her story of being called “Batman” and “ninja” in middle school for wearing a hijab (i.e., what is commonly mistranslated as a Muslim “headscarf”). She entered college after 9/11 where she was called “Osama bin Laden” and “terrorist.” From those experiences, Khan concluded that “the only way to end discrimination is if we ask our fellow sisters to experience hijab themselves.”

On World Hijab Day, non-Muslim women and non-hijabi Muslims (i.e., Muslim women who don’t wear hijabs) are urged to wear a hijab for a day “in recognition of millions of Muslim women who choose to wear the hijab and live a life of modesty.”

So, in solidarity with Muslims, misguided non-Muslim teachers and students in public schools around the country adopted the religious practice of hijab all day on Feb. 1, including schools right here in Illinois.

Peg Mannion, community relations coordinator for Glenbard South High School in Glen Ellyn, Illinois, described World Hijab Day as a “a student-led” effort that some teachers participated in and which aligns with Glenbard’s commitment to be a “culturally inclusive learning environment.”

As the news of President Donald Trump’s travel ban on seven Muslim nations was breaking Jan. 28, health teacher Allison Williams was learning through Facebook that Feb. 1 had been designated World Hijab Day.

The juxtaposition of the two events gave her an idea. What if teachers in the school that has District 218’s highest population of Muslim students wore hijabs for the day? On Monday morning, she emailed school officials, only to learn that French teacher Kelly Karstrand had already done the same thing.

According to the Chicago Tribune, more than 20 teachers, most of whom were not Muslim, wore hijabs on World Hijab Day.

While Richards High School history teacher Joyce Cruse claims that the “movement is not about politics,” both she and history teacher Rahaf Othman mentioned Trump’s immigration “ban” in connection to their decision to wear a hijab.

Here are two allegedly “non-political” statements, the first from Williams, the second from Cruse:

“The election of this president has made a lot of our students feel not only that their president is against them but that maybe a lot of others are too—more people than they originally thought.”

“The day after the election one of my students said his father sat the whole family down at the breakfast table and told them, ‘I want all of you to be careful about how you behave and what you say because this man hates us.'”

Despite claims of Khan and fans of World Hijab Day, it is unavoidably political as revealed in a controversial Washington Post essay written by two Muslim women prior to World Hijab Day 2015 and titled “As Muslim women, we actually ask you not to wear the hijab in the name of interfaith solidarity.” Here is an extended excerpt from the commentary by journalists Asra Q. Nomani and Hala Arafa who suggest that World Hijab Day is both political and offensive to many Muslims:

Last week three female religious leaders—a Jewish rabbi, an Episcopal vicar and a Unitarian reverend—and a male imam, or Muslim prayer leader, walked into the sacred space in front of the ornately-tiled minbar, or pulpit, at the Khadeeja Islamic Center in West Valley City, Utah. The women were smiling widely, their hair covered with swaths of bright scarves, to support “Wear a Hijab” day.

The Salt Lake Tribune published a photo of fresh-faced teenage girls, who were not Muslim, in the audience at the mosque, their hair covered with long scarves….

For us, as mainstream Muslim women, born in Egypt and India, the spectacle at the mosque was a painful reminder of the well-financed effort by conservative Muslims to dominate modern Muslim societies. This modern-day movement spreads an ideology of political Islam, called “Islamism”….

We reject this interpretation that the “hijab” is merely a symbol of modesty and dignity adopted by faithful female followers of Islam.

This modern-day movement, codified by Iran, Saudi Arabia, Taliban Afghanistan and the Islamic State, has erroneously made the Arabic word hijab synonymous with “headscarf.” This conflation of hijab with the secular word headscarf is misleading. “Hijab” literally means “curtain” in Arabic. It also means “hiding,” ”obstructing” and “isolating” someone or something. It is never used in the Koran to mean headscarf.

Born in the 1960s into conservative but open-minded families (Hala in Egypt and Asra in India), we grew up without an edict that we had to cover our hair. But, starting in the 1980s, following the 1979 Iranian revolution of the minority Shiite sect and the rise of well-funded Saudi clerics from the majority Sunni sect, we have been bullied in an attempt to get us to cover our hair from men and boys.

To us, the “hijab”is a symbol of an interpretation of Islam we reject…

We have seen what the resurgence of political Islam has done to our regions of origin and to our adoptive country.

As Americans, we believe in freedom of religion. But we need to clarify to those in universities, the media and discussion forums that in exploring the “hijab,” they are not exploring Islam, but rather the ideology of political Islam….

In the name of “interfaith,” these well-intentioned Americans are getting duped by the agenda of Muslims who argue that a woman’s honor lies in her “chastity” and unwittingly pushing a platform to put a hijab on every woman.

Please do this instead: Do not wear a headscarf in “solidarity” with the ideology that most silences us….Stand with us instead with moral courage against the ideology of Islamism that demands we cover our hair.

Due to the dust-up that ensued following the publication of their essay Nomani and Arafa wrote a short follow-up essay for the New York Times that offers a view of hijabi oppression that few Americans see:

Saturday night at the Dar Al Noor mosque in Manassas, Va., near Civil War battlefields, a girl of about 7 sat cross-legged in a dimly lit back corner of the prayer hall in the cramped “sisters’ section.” A tinted waist-high glass barrier separated the girl from the spacious “brothers’ section,” where about 50 men listened intently to a Saudi preacher who ignored the “sisters.”

The girl’s hair was entirely covered by a scarf, per the mosque’s guidelines for “proper Islamic attire….” As mainstream Muslim women, we see the girl’s headscarf not as a signal of “choice,” but as a symbol of a dangerous purity culture…that has divided Muslim communities in our own civil war, or fitna, since the Saudi and Iranian regimes promulgated puritanical interpretations of Sunni and Shia Islam….

This purity culture covers, segregates, subordinates, silences, jails and kills women and girls around the world. Recently, in Bareilly, India, a father killed his daughter, 4, smashing her head against the floor when her scarf slipped from her head during dinner. In Ontario, a few years ago, a man strangled his 16-year-old sister when she defied their father, including by refusing to cover her hair. In November, a former University of Missouri instructor dragged a female relative, 14, out of school “by the hair” when he discovered she hadn’t covered her hair. Today, in Iran, friends of the journalist Masih Alinejad dodge batons as they shoot photos of themselves, hair bare, in a campaign Alinejad started, #MyStealthyFreedom, to protest Iran’s mandatory headscarf law.

But we believe women have a right to wear–or not wear–the headscarf. To that end, we heard from Muslims from Malaysia to Minnesota who told us again and again: “Thank you.”

No matter what our non-Muslim public school teachers think about hijab, no matter what their intentions are, it should be clear that their acts of wearing a hijab to demonstrate solidarity with hijabi Muslim women is a divisive, political act.

While American taxpayers ponder the wisdom of non-Muslim, public school teachers adopting a Muslim religious practice—controversial even among Muslims—for an entire day every school year, I’ll leave you with this troubling endorsement of World Hijab Day:

[U]ntil I heard about world hijab day, I didn’t know much. After reading what Islam is about and why women wear hijab, I decided to convert….I would’ve never learned about Islam if it weren’t for world hijab day. http://worldhijabday.com/2836-2/

Hypocrisy of Leftists on Religious Tolerance
b
a
x
r