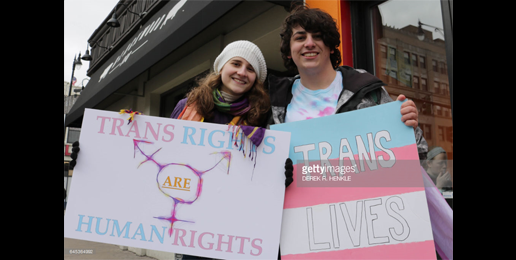 Another high school graduation has been marred by politically correct fecklessness. This time it wasn’t a controversy over a student’s speech that marred the event but instead an award that tainted what should have been a joyous family affair.

This year Deerfield High School (DHS) on Chicago’s affluent North Shore awarded one of its highest honors, the John F. Kennedy Medal of Honor award to a student who very publicly “identifies” as  “genderqueer and pansexual.” As reported by the Chicago Tribune, “Earning the John F. Kennedy Medal of Honor this year was Sorrel Rosin. Principal Kathryn Anderson said the award is given to a person who demonstrates courage in the pursuit of excellence.”

Former principal Audris Griffith described the JFK Medal of Honor as “an award the high school gives out to students exemplifying personal bravery and responsible action.” What did Rosin do to deserve this award? Apparently, he received this award for identifying as genderqueer, cross-dressing at school, and starting “her [sic] own initiative, called The Gender Neutral Project…. The goal of this project is ultimately to create and distribute stickers that make spaces, such as public bathrooms, safer and inclusive of people of all gender identities.” Rosin explained his motivation for the Gender Neutral Project:

I had a lot of issues this year with being late to class and missing class, because I just had to go to the bathroom, and I think one of the hardest things this year was changing for gym because there’s two locker rooms, neither of which I fit into.

Even though Deerfield High School has two co-ed restrooms, that was not enough for Rosin. In a Change.org petition, he demands more:

*** MY SCHOOL DOES HAVE 2 GENDER NEUTRAL RESTROOMS BUT THEY ARE IN VERY HARD TO ACCESS AREAS AND MOST PEOPLE IN THE SCHOOL DO NOT KNOW ABOUT THEM. THERE IS NO GENDER NEUTRAL LOCKER ROOMS ***

To be clear, these are multi-occupancy co-ed restrooms, available to any boys and girls to use at the same time. These are not single-occupancy restrooms, nor are they single-sex restrooms that only gender-dysphoric students of the opposite sex may use. They are multi-stall, co-ed restrooms. In Rosin’s view, the problem is DHS need more of these restrooms. He wants them more centrally located. And he wants co-ed locker rooms.

What does this sad event teach about public school leaders who believe the effort to eradicate public recognition of sex differences in restrooms and locker rooms constitutes “courage in the pursuit of excellence” and “responsible action”? It teaches first that they are not equipped to teach and train children. Such leaders are at best ignorant and foolish.

Second, it teaches that parents should not put their children in any context where they will be taught and trained by such fools.

A look at Deerfield High School’s 2015 JFK Medal of Honor recipient offers a glimmer of hope that all is not yet lost. Political correctness and the obsession with using taxpayer-funded schools to advance anarchical Leftist views on sexuality may not have wholly overtaken the hearts and minds of “progressive change agents.” Some may still be able and willing to recognize and honor true excellence and responsible action as they did when they awarded the JFK Medal of Honor to Heath Ogawa:

The son of a Japanese father and American mother, Ogawa…was raised in Japan, went to public school there and was not a very good student before fate catapulted him to the United States.

“On March 11, 2011, my life changed…. With the earthquake, tsunami and possible radiation poisoning my parents made the decision to send me to live with family friends in Highland Park.”

Living in a condominium in Deerfield later on and taking care of himself, Ogawa said some friends were jealous of his independence — but he did not see it that way.

“I was filled with responsibility and loneliness…. There was no dinner waiting for me when I got home, just the breakfast dishes I hadn’t washed. I didn’t learn how important family was until I opened the door to an empty condo.”

Hardly able to speak English and not knowing how to read a word of it, Ogawa told how he embraced his studies, athletics and friendship. Earlier this month he became a state gymnastics champion in the long vault and in March became the thirteenth best diver in Illinois. He will go to Lake Forest College in the fall to dive.

“He shows all of that and lifts all of our spirits,” Griffith said. “On snowy days we would see him riding his long skate board because it was the only way he could get to school.”

In his Change.org petition, Rosin shared that he, like so many other children and teens, has been bullied. Bullying is a persistent and tragic reality that grows out of the fallen nature of humans and the immaturity of youth. Teens are able to recognize disordered behavior, but many are unable to control how they respond to it. Adults who ignore the nature of adolescent culture and allow children to cross-dress at school increase the likelihood that these children will be victims of bullying.

Sorrel Rosin deserves compassion, empathy, and prayers because he’s human, confused, and hurting. Neither Rosin nor anyone else deserves an award for efforts to normalize sexual deviance.

A final word about courage: Admirable courage is not merely doing something bold and uncomfortable. It is not overcoming fear in the service of transgressing all boundaries.

Admirable, award-deserving courage demonstrates perseverance, boldness, and discomfort in the service of a worthy goal, and a worthy goal is one that is informed by goodness and truth. Eradicating the public recognition of and respect for sex differences is not a worthy goal, and pursuing it—no matter how difficult the effort—is not worthy of honor. Surely, there was one student in DHS’ 2017 graduating class who demonstrated courage in the service of a goal that all families would view as worthy.

Who Is Teaching Our Children?
b
a
x
r