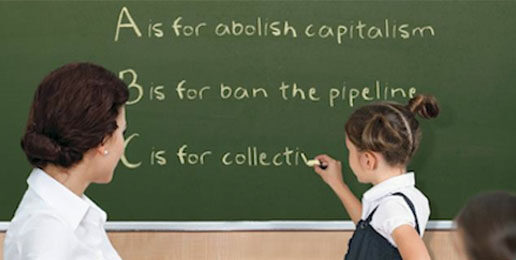 On July 10 at Walled Lake Western High School in Michigan, popular teacher Justin Kucera who taught AP World History and coached varsity baseball and basketball and who by all accounts never brought his politics into his teaching or coaching was fired for tweeting, “I’m done being silent. Donald Trump is our president.” Meanwhile,

Paulette Loe, a now-retired Walled Lake Western teacher, encouraged students to read an article from the Atlantic about “how to beat Trump” while still employed. Nicole Estes, a kindergarten teacher in the district, called Trump a “sociopath” and a “narcissist” on Facebook in 2016 and is still employed at Keith Elementary School [also in Walled Lake Consolidated school district].

It should be unbelievable that a teacher could be fired from a government school for expressing his support for a sitting president while indoctrinators are free to bring their politics into the classroom regularly with no fear of retribution. Sadly, this is now the new normal.

Twelve years ago when I was a member of the English Department at Deerfield High School on Chicago’s North Shore working full-time in the writing center, teachers Elliott Hurtig and Jeff Berger-White were teaching the repugnant play Angels in America: A Gay Fantasia on National Themes, and Hurtig was also teaching the historically inaccurate Laramie Project, both plays of which espoused politically “progressive,” morally regressive views of homosexuality.

Setting aside the egregious obscenity in Angels in America, I discussed with a purportedly Catholic writing center colleague the ethical problem of teachers presenting resources from only one side of the debate on this most controversial cultural issue. I made the case that in an educational environment, teachers have an obligation to present resources from opposing voices as well. She responded that because she was absolutely sure opposing voices—that is, conservative voices—were wrong, they shouldn’t be allowed to be presented to students.

This is the kind of presumptuousness that has long poisoned education in America from elementary schools through colleges and universities, and has created a dissolute and destructive culture. Leftists demand absolute autonomy and arrogate to themselves the right to indoctrinate other people’s children because they have unilaterally concluded that their political and moral beliefs are objectively true, and opposing views are false. From kindergarten on up, leftists are indoctrinating other people’s children with their arguable leftist beliefs on homosexuality, opposite-sex impersonation, race, sex, American history, and presidential politics with no negative repercussions.

The rules which obtain among themselves appear to them self-evident and self-justifying. … People are accustomed to believe, and have been encouraged in the belief …  that their feelings … are better than reasons, and render reasons unnecessary. The practical principle which guides them to their opinions on the regulation of human conduct, is the feeling in each person’s mind that everybody should be required to act as he, and those with whom he sympathises, would like them to act. No one, indeed, acknowledges to himself that his standard of judgment is his own liking; but an opinion on a point of conduct, not supported by reasons, can only count as one person’s preference; and if the reasons, when given, are a mere appeal to a similar preference felt by other people, it is still only many people’s liking instead of one. … his own preference … is not only a perfectly satisfactory reason, but the only one he generally has for any of his notions of morality, taste, or propriety.

In a recent appearance on Mark Levin’s program Life, Liberty & Levin, Dr. John Ellis, Distinguished Professor Emeritus of German Literature at the University of California at Santa Cruz, chairman of the California Association of Scholars, and author of Literature Lost: Social Agendas and the Corruption of the Humanities and The Breakdown of Higher Education: How It Happened, the Damage It Does, and What Can Be Done discussed the root cause of the cultural “shout downs” and riots:

The real problem is way behind the scenes in the classrooms, which the public never sees. … you’ve had a very long campaign of converting the universities into one party campuses. If you go back 50 years … there were 3 left-of-center professors to 2 right-of-center professors. … that’s consistent with a very healthy debate between the left and the right on campus. But by … 1999, a study shows 5 to 1. … By another five to six years later, it’s gone to 8 to 1, and the current studies … coming out now, it’s something like 13 to 1. There’s every reason to believe that that’s getting more extreme all the time because one of these studies looks to the junior ranks—assistant professors, associate professors—and found that the ratio there, left to right, is 48 to 1.  … The hiring being done now is at the rate of about 50 to 1. … So, you’re going to wind up with a complete monoculture within a short period of time. And a one-party campus is a campus that’s dysfunctional. …

The campus is so far left and so irrational now, and it’s leftism that is poisoning the culture. One profession after another is being essentially corrupted. … It’s totally poisoned journalism. It’s poisoned the teaching in the high schools because the high school teachers are all trained on college campuses

Ellis also suggests that parents who continue to send their children to colleges and universities that are in the business of poisoning culture are part of the problem:

Parents have a very fixed attitude, derived from the past, that sending their kids to college is a first rate way to launch them into a life and a career, and then there’s the fact that those great names of the institutions of higher learning of Harvard, Yale, Columbia … are very, very impressive. It casts a kind of spell over the public. They really cannot believe … that what was so glorious is now in fact no longer there.

Conservatives often ask what they can do to help restore health to our ailing culture. Here’s one thing they can do: Don’t send their children to colleges and universities that have “monocultures,” and through those monocultures, poison culture.

Let every student be plainly instructed and earnestly pressed to consider well the end of his life and studies is to know God and Jesus Christ, which is eternal life, and therefore to lay Christ in the bottom, as the only foundation of all sound knowledge and learning.

The Princeton University shield once depicted an open Bible inscribed with “VET NOV TESTAMENTUM,” that signified the Old and New Testaments; a ribbon above the Bible that said, “VITAM MORTUIS REDDO,” which means, “I restore life to the dead”; and a ribbon below the shield with the words “DEI SUB NUMINE VIGET,” which mean, “Under God’s power she flourishes.” Such expressions today would be an embarrassment to the faculty and a trigger to most students.

Dartmouth College’s original motto was “VOX CLAMANTIS IN DESERTO,” which is translated as “A voice crying out in the wilderness,” an allusion to Scripture about preparing the world for Christ. Ironically, Dartmouth is now a cacophonous voice creating wilderness out of the semi-tamed culture Christianity created.

Like other tyrannies, the tyranny of the majority was at first … chiefly as operating through the acts of the public authorities. But reflecting persons perceived that when society is itself the tyrant—society collectively, over the separate individuals who compose it—its means of tyrannising are not restricted to the acts which it may do by the hands of its political functionaries. Society can and does execute its own mandates: and if it issues wrong mandates instead of right, or any mandates at all in things with which it ought not to meddle, it practises a social tyranny more formidable than many kinds of political oppression, since, though not usually upheld by such extreme penalties, it leaves fewer means of escape, penetrating much more deeply into the details of life, and enslaving the soul itself. Protection, therefore, against the tyranny of the magistrate is not enough: there needs protection also against the tyranny of the prevailing opinion and feeling; against the tendency of society to impose, by other means than civil penalties, its own ideas and practices as rules of conduct on those who dissent from them; to fetter the development, and, if possible, prevent the formation, of any individuality not in harmony with its ways, and compel all characters to fashion themselves upon the model of its own. There is a limit to the legitimate interference of collective opinion with individual independence: and to find that limit, and maintain it against encroachment, is as indispensable to a good condition of human affairs, as protection against political despotism.”

You know there’s a problem when a left-leaning site like the satirical website the Onion skewers the close-minded propaganda that leftists identify as “education” as it did in a post titled “College Encourages Lively Exchange of Idea”:

As an institution of higher learning, we recognize that it’s inevitable that certain contentious topics will come up from time to time, and when they do, we want to create an atmosphere where both students and faculty feel comfortable voicing a single homogeneous opinion. … Whether it’s a discussion of a national political issue or a concern here on campus, an open forum in which one argument is uniformly reinforced is crucial for maintaining the exceptional learning environment we have cultivated here.(emphasis added for fun).

Leftists are fond of saying that free speech does not guarantee freedom from consequences. They fail to acknowledge that if those consequences are loss of employment, First Amendment speech protections are, in effect, nullified. And we all know, leftists couldn’t care less.

Please consider a gift to the Illinois Family Institute.
As always, your gift to IFI is tax-deductible and greatly appreciated!

Is This the End?