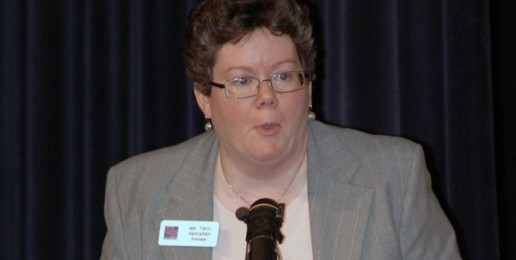 Anyone who has spent any extended period of time in a public high school, either as an employee or student, knows that discrimination exists in these purported bastions of tolerance and diversity. Just ask any conservative Christian teen — especially those teens who take their faith seriously. For example, ask the members of the extracurricular club “Growing in Faith Together” (GIFT) at Glenbard South High School in the Chicago suburb of Glen Ellyn.

Members of GIFT have experienced resistance from the administration, particularly from Principal Terri Hanrahan, for the better part of this school year. Among other things, Principal Hanrahan initially told students that they could not put up posters promoting their club, something that all other extracurricular clubs can do. Then she prohibited students from spelling out on their signs what the acronym GIFT stands for, saying that students cannot include the word “faith” on their posters. GIFT students accommodated that inappropriate request, got approval for their new posters which they put up around the school only to have the administration remove them.

More recently, Glenbard South had a freshman orientation night for next year’s incoming freshmen. GIFT was excluded from the materials that listed extracurricular clubs and activities. While the gay-straight alliance P.R.I.S.M. is included on the Glenbard South’s school activities webpage for students, GIFT is excluded.

Here is a recent letter that a family sent to Superintendent Michael Meissen about this issue:

During the school year 2009-2010 a group of Glenbard South Christian students began meeting in the same room and with the same school sponsor as a previously existing student Bible club. The students wanted to meet for the purpose of getting to know each other better and to grow in their Christian faith together. Over the course of time, these students decided to refocus their meetings and to begin to call their group, Growing In Faith Together. The club grew. The two leaders of the club were seniors and graduated in 2010.

My son and another student were selected to be leaders of the GIFT club for the present school year 2010-11. When school began last fall, my son and others began to resume meetings for GIFT. They made posters to post in the hallway to give meeting information. The posters included the name of their club, Growing in Faith Together. These students were told by the school administration that they could not put up their posters, because the word “Faith” was on the poster. They were told that “because of separation of church and state,” their poster could not be allowed. They were told they could use only the acronym GIFT.

Several parents contacted the school administration, Ms. Hanrahan in particular, and asked for some explanation of what had happened to the posters and why. This time, I and other parents were told that the posters were removed because they implied “faith formation” was happening at Glenbard South. We were told that South could not be considered in any way to be aligned with spiritual formation.

I contacted Ms. Hanrahan and asked her to reverse her decision that the name GIFT could not be used. I found her decision to be in violation of the Equal Access Act. I got no response at all from Ms. Hanrahan until three weeks later when I told her I would contact the superintendent unless she responded before the upcoming Friday afternoon. Late that Friday afternoon, I received a note from her that she would allow the acronym GIFT to be used (but only the acronym).

Recently, at the incoming freshmen orientation and during the registration process, I learned that all incoming students received registration materials that included a list of Glenbard South activities and clubs that they could participate in as new high school students. However, the GIFT club was not included on the list. When a parent contacted Ms. Hanrahan for the reasoning behind this, she indicated that GIFT was not a school-sponsored club despite the fact that GIFT had been meeting for over a year on Glenbard South’s campus, has a faculty sponsor, and is student-led.

Thank you very much for your attention to this serious matter.

If we hope to repair the damage done to public education by “progressive” ideologues whose views dominate not only school administrations and faculties but also schools and departments of education that train future teachers, we need an army of parents like these parents. We need parents who have the wisdom to recognize error and the courage to do something about it, even if the necessary action is personally costly. We need parents and community members who understand that we must not ignore or dismiss problems because they seem trivial. It is the slow accretion of little offenses like this one at Glenbard South that has resulted in huge, systemic problems. And we have to persevere. We must not continue to be short-sighted, weak-willed, fearful, or lazy while the other side perseveres tenaciously with the long view always in mind.

*Illinois Family Institute contacted both Principal Hanrahan and Superintendent Meissen for comment, but our calls were not returned.