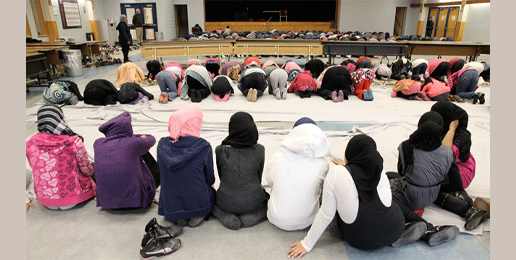 Friday prayers held during class hours at Valley Park Middle School in Toronto. Boys pray in front, girls pray behind them separated by a barrier and menstruating girls are obliged to sit at the very back to observe the service but not participate.
Hypocrisy of Leftists on Religious Tolerance
Written By Laurie Higgins   |   02.16.17
PRINT

On Monday, I wrote about World Hijab Day during which non-Muslim teachers in public schools adopted the religious practice of hijab, wearing the head covering that some Muslim women wear voluntarily and some are coerced into wearing. Hijab is a controversial practice even among Muslims, many of whom see it as a symbol of a form of political Islam called Islamism that oppresses women.

While “progressives” heap scorn and ridicule on school districts that enforce dress codes that prohibit skimpy skirts and décolletage-baring tops, “progressive” teachers don hijabs in solidarity with Muslim women whose religion requires them to protect their modesty by covering their hair and sometimes their entire bodies from the top of their heads to the tips of their toes.

While “progressives” mock conservative Christians for their commitments to chastity until marriage, they demonstrate their solidarity with Muslims who believe that “a woman’s honor lies in her ‘chastity.’”  Muslim women Asra Q. Nomani and Hala Arafa inadvertently expose the hypocrisy of “progressive” American women when they describe the beliefs foundational to hijab:

[T]he “hijab “is a symbol of an interpretation of Islam we reject that believes that women are a sexual distraction to men, who are weak, and thus must not be tempted by the sight of our hair…. This ideology promotes a social attitude that absolves men of sexually harassing women and puts the onus on the victim to protect herself by covering up.

“Progressive” American women who believe women have no responsibility for the sexually abusive actions of men don hijabs to demonstrate solidarity with a religious practice that holds women responsible for men’s abusive actions. “Progressive” American women who march in the streets wearing clitoris costumes and “p*ssy” hats, reveling in the words of Madonna who offered to perform a sexual act on any man who voted for Hillary show solidarity with a religion that covers women from head to toe to prevent men from being tempted.

Nazma Khan, who created World Hijab Day in response to being called names for wearing a hijab, asserts that it’s an effort to end discrimination and foster religious tolerance—both noble goals.

That said, is it the role of public school teachers to teach students about solidarity with any religious tradition or political goal, let alone a controversial and divisive one?

In his book Save the World on Your Own Time, Professor Stanley Fish disputes the notion that teachers should “advocate personal, political, moral, or any other kind of views except academic views.” Fish contends that teachers are not hired to do things like “produce active citizens, inculcate the virtue of tolerance, redress injustices, and bring about social change.” In Fish’s view, these are tasks properly left to “preachers, therapists, social workers, political activists, professional gurus, [and] inspirational speakers.” I would add parents to that list.

They hate them primarily for three reasons:

2. They believe that homoerotic activity is immoral.

3. They believe that marriage has a nature central to which is sexual differentiation.

Guess what? So do the majority of Muslims—including even moderate Muslims.

World Hijab Day reveals the hypocrisy of Leftists who hold theologically orthodox Christians in disdain because of their historical Christian beliefs regarding sexuality while participating in an event to show solidarity with the Muslims who hold similar positions.

In a 2013 Huffington Post piece on the persecution of Christians worldwide and especially in the Middle East, liberal Dr. Kelly James Clark, who heads up an interfaith organization decries the silence of the Western media and the U.S. Government:

In early November, German Chancellor Angela Merkel declared that Christianity is “the most persecuted religion in the world.” Although met with predictable criticism, Rupert Short’s recent research report for Civitas UK confirms Merkel’s claim—we may not want to hear it, but Christianity is in peril, like no other religion….Short shows that “Christians are targeted more than any other body of believers.” Short is the author of the recently published Christianophobia: A Faith Under Attack. He is concerned that “200 million Christians (10 percent of the global total) are socially disadvantaged, harassed or actively oppressed for their beliefs.”

Why has the tragedy of Christians in the Muslim world been ignored? Short blames this on the media’s fear that criticizing Muslims is tantamount to racism. I attribute it as well to secular media’s lack of interest in and sometimes even scorn for religious belief.

Western media must overcome its fear of criticizing Muslims and its disinterest in religious belief. Religious liberties are the most fundamental human liberties….In countries where religious liberty is conspicuously absent, one is likely to find a host of other liberties threatened as well.

With hate crimes against Muslim-Americans tripling in 2016, it is important we take this moment to stand together with our fellow Americans on World Hijab Day. Rooted in the American principles of religious freedom and liberty, the World Hijab Day movement seeks to end the discrimination and judgment that comes with wearing a hijab.’

…All Americans of all faiths should be allowed to freely exercise…their religious choice without the fear of violence and bigotry.

It’s refreshing to hear a Democrat passionately endorse religious liberty. Perhaps Weprin will support the right of Christians in wedding-related businesses to decline to use their gifts and labor to serve a type of event that offends the God they serve. These business owners are encountering far worse bigoted persecution than being called names—though they experience that as well. They are losing their livelihoods.

From their religion of secularism—that is, faith in and worship of secularist assumptions about human nature and man’s relationship to the world—“progressives” arrogate to themselves the right to exercise their religion freely, including in the conduct of their businesses. But “progressives” deny that right to those whose religion includes belief in God. So, while clothing designers can refuse to serve a person based on the designers’ opposition to the beliefs of the person’s spouse, bakers are not permitted to refuse to bake an anti-wedding cake based on their opposition to same-sex anti-weddings. And remember, unlike “progressive” clothing designers who refuse to serve a person, these Christian bakers are happy to serve homosexuals—just not bake anti-wedding cakes.

Leftist hypocrisy is revealed not only through World Hijab Day but also through the accommodation of  Muslim religious practices in public schools. For example, in addition to some Glenbrook South High School teachers wearing a Hijab all day on Feb. 1, the school provides a prayer space for Muslims as does Glen Crest Middle School in Glen Ellyn, Illinois. In a diverse and welcoming society, such accommodations seem reasonable.

But if those accommodations are reasonable, why was there such vociferous “progressive” opposition to the law passed here in Illinois mandating a moment of silence in public schools that specifically states that it “shall not be conducted as a religious exercise but shall be an opportunity for silent prayer or for silent reflection on the anticipated activities of the day”?

When I worked at Deerfield High School, this moment of silence was a blindingly quick 7 seconds. A student inclined to pray couldn’t make it much further than “Our Father who art in Heaven” before they were hustled on to more pressing homeroom issues like, well, often nothing.

And yet many “progressives” oppose even that, evidently fearing that allowing 7 seconds of silence during which students may pray constitutes the establishment of a state religion. And yet, non-Muslim teachers wearing hijab all day is a religiously neutral act and providing Muslim students with prayer rooms is constitutionally hunky dory. Curiouser and curiouser.

In a radio interview in Dec. 2016, Professor Massimo Introvigne, Director of the Centre for Studies on New Religion, stated that “[religious] intolerance is the antechamber of discrimination which then in turn is the antechamber of…persecution.” He further shared that “between 500 and 600 million Christians…cannot practice their own faith in complete freedom.”

The United States is rapidly moving from intolerance of Christianity to discrimination. While “progressives” twist themselves into a Gordion knot to show deference to, compassion for, and solidarity with Muslims, they regularly and openly demonstrate disdain for Christians. The vitriol directed at conservative Christians in the culture results in Christian children feeling embarrassed to share their beliefs. Would public school teachers show their solidarity with theologically orthodox Christians by wearing crosses visibly for an entire day, or would that be a bridge of tolerance too far?