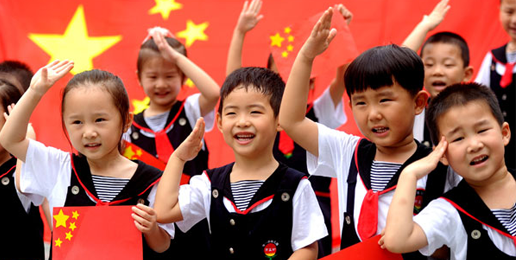 Warning: not for young readers

A private preschool in Shenzhen, China just made international news for hiring a pole-dancer to sexualize welcome its 3-6-year-old students on the first day of school. With a bare midriff, black leather hot pants, and platform shoes, a young woman is seen bumping and grinding around a pole up on a stage, swinging her long ponytail in the kind of performance one would expect to see only in strip clubs and Hollywood movies. Posters advertising a pole-dancing school adorned the walls of the courtyard where the undulating performance took place. Principal Lai Rong—a woman—rationalized her decision by claiming that she wanted to “lighten up the atmosphere.” Has she ever heard of therapy pets, ventriloquists, or magicians?

Inquiring minds might be asking why the atmosphere at the preschool she runs is dark. Is she alluding to the fear some children experience when they attend school for the first time? If so, surely Rong can’t believe either that pole-dancing is going to help them or that pole-dancing is the only (or best) option for alleviating separation anxiety in little ones. Some—this writer included—might argue that exposing preschoolers to pole-dancing darkens rather than lightens the atmosphere.

Some shocked and offended parents tried to shield their children from seeing the unseemly spectacle, and some are reportedly seeking to withdraw their children from the school. In response to one mother’s objection, Rong justified pole-dancing as “good exercise.” Whatever happened to the Hokey Pokey?

But apparently not all parents objected. The Daily Mail quotes one parent as saying, “What kind of prejudice is this? What’s wrong with pole-dancing?… [P]ole dancing is just another art form!” Ah yes, of course, all moral disapproval from more tradition-oriented adults is “prejudice.” No need for an actual argument when name-calling will do.

Well, some argue that stripping is an art form and that “drag” is an art form. Some argue that the pornographic photos in Playboy Magazine are art. Some call a photo of a crucifix submerged in urine art. Some called Robert Mapplethorpe’s photograph of his own nether region from which a bullwhip is dangling “art.” Just slapping the word “art” on anything the darkened minds of fallen humans create, however, does not make it art. And if pole-dancing were art, it would be wholly inappropriate art for children.

This summer the Ames Public Library in Ames, Iowa defended its “Camp Drag” by claiming that it would “Provide interested young people with a unique opportunity… to learn the art of drag performance.” Ironically, this same summer a documentary about the beloved Mr. Rogers—a deeply faithful Christian—met with huge critical and popular success from even “progressives” who regularly present activities, images, and ideas to children that would have disturbed him.

Now we’ve got drag queen story hours for toddlers in taxpayer-subsidized public libraries all across the country and a public library in Iowa hosting a drag camp for the kiddies, so how long until we have public libraries hosting pole-dancing workshops for the little ones? Why would pole-dancing be a greater moral offense than drag queen story hours? The kinds of things a generation or two ago could be found only in triple-X book stores and clubs in seedy city neighborhoods or remote stretches of highways, or in the basements of weirdos, “progressives” now work like the devil to show to our children and teens. Picture books about homosexuality and cross-dressers, story time with drag queens, teen magazine tutorials on anal sex, and now pole-dancing for preschoolers. This is where the sexual revolution has taken us. It’s baffling that “progressives” can see the rotting forest for the trees and still believe America (or anywhere else) is a better place—especially for children—than it was before the sexual revolution ruined everything.