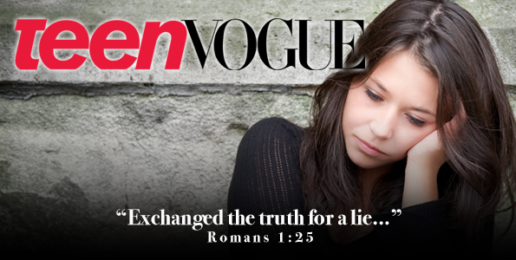 The anus is full of nerve endings that, for some, feel awesome when stimulated.

The anus is very tight, and the feeling of having something in your rectal area is unique. It is often described as a feeling of fullness, which can be delightful.

Unlike vaginas, rectums are not designed for penetrative sex. They are not elastic, they don’t produce lubrication, and the tissue lining is thinner and more easily torn, which is why sodomy is both unnatural and rife with health risks.

But other than that, sodomy’s swell.

Many may not realize how cool sodomy has become or that it’s been on the rise among heterosexual couples for the past 25 years, especially among younger women—including even high school girls—who are being pressured by their male partners who have drunk deeply from the polluted well of pornography.

How unfortunate that now a woman, Gigi Engle, actively seeks to normalize a sexual practice promoted by the business that profits from the degradation of women.

Perhaps a closer look at the person Teen Vogue finds a fit “educator” for adolescents is in order.

On her blog, Engle shares a lot about her promiscuous sex life (e.g., sex on first dates, sex on 4th dates, casual hook-ups, and sex with men who have girlfriends), and in one entry, she shared her “5 Essential Dating Deal Breakers”  one of which is this:

If the sex is bad, even once, I’m out. This may be a harsh judgment and I do give second chances, but not on this one. I’m immediately put off the entire situation. Doing something weird mid-coitus also falls under this umbrella….I don’t know you very well. If you want to get weird, let’s wait until we’re actually dating or at least until I’ve had another glass of wine.

Just a few days ago, on the Brides magazine website, Engle proved her pervert bona fides by provided a tutorial on “How to Successfully Pull Off Sex in Public”:

Admit it: So many of us want to have sex in public but don’t know how…. Sex in public is an art form, and pulling it off successfully is no joke. It takes skill and cunning to make it happen, but isn’t the planning (and then getting away with it) half the fun?

Here is everything you need to know about having sex in public. Happy hunting!

…Having sex in public is technically illegal, so therefore having a plan in place will help you follow through without incident (read: arrest).

Don’t choose a time that coincides with heavy foot traffic or the unforgiving stare of the sun…. If you creep into a park at 7 p.m. on a summer evening, less people will be out strolling around or picnicking.

…A playground in the dead of night may sound like a good idea, but it is not. If you get caught having sex on a playground, you might wind up on a sex-offender list. Yes, that is a thing.

Don’t choose places that are anywhere near where children roam, even if said children are not currently there.

Go for elevators (assuming you can press the “stop” button without setting off an alarm), stairwells, forests, parks, and airplane bathrooms. You want to avoid places that have lots of people.

…[S]kip underwear. Both you and your partner can do without it for this particular outing. Underwear of any variety creates an unnecessary barrier that will only be an annoying hindrance to your public sex…. The key to pulling off exhibitionism: simplicity.

Maybe someone should tell know-it-all sexpert Engle that, although everyone poops, not everyone poops on the person they love most in the world—the person for whom they would lay down their life, the person whom they view as created in the image and likeness of God and, therefore, of infinite dignity and worth.

Apparently when Engle uses the word “natural,” she means “occurring in nature,” as in some humans do it. Is that how she determines the fitness or morality of an action? If so, then bestiality, incest, voyeurism, and necrophilia are “natural.” Also, like sodomy, bestiality, incest, voyeurism, and necrophilia have been around “since the dawn of humanity.”