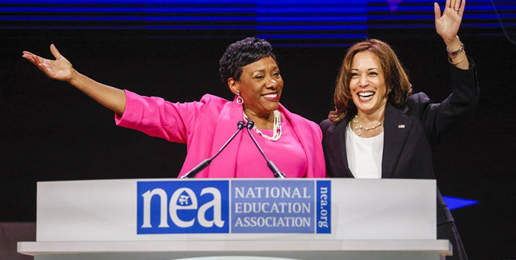 The National Education Association’s (NEA) annual convention took place last week in Chicago. It opened with a theatrical speech act by NEA president, Rebecca (Becky) Pringle who has no dearth of pride in the “amazing accomplishments” of the NEA members. Pringle cited as inspiration for world transformation—not systemically oppressed persons of color like Thomas Sowell, Carol Swain, or Glenn Loury—but communist and former Black Panther who studied under Herbert Marcuse, Angela Davis:

Of the many troubling things Pringle emoted, this may be the most troubling:

NEA, you are answering my call to lead a movement that unites, not just our members, but this entire nation, to reclaim public education as a common good, as the foundation of this democracy, and then transform it into something it was never designed to be—a racially and socially just and equitable system that prepares every student, every student, EVERY STUDENT, EVERY ONE TO SUCCEED IN THIS DIVERSE AND INTERDEPENDENT WORLD!

Yes, she was cacophonously shouting about the NEA’s goal to transform public education into something it was never designed to be.

Precisely how are “socially just and equitable” defined and by whom? How does the NEA propose to achieve their socially constructed goal?

The NEA plans to achieve that goal by using taxpayer funded schools with captive audiences to promote sexual perversity, sexual confusion, science denial, the slaughter of the unborn, compulsory language mandates, censorship of ideas they hate, and the destruction of the nuclear family. That’s how.

… [T]he rights many of us have spent a lifetime fighting to secure are being stripped away in our lifetimes.

… we’ve known since 2016, since that fateful election, that this day would come—that we would feel the effects of a radicalized Supreme Court, issuing decisions that do not reflect the views or the values of America.

We knew that the ground had shifted and the stage had been set to move us further away from the promise of America for all Americans, from decisions on school prayer that attack religious freedom to vouchers that threaten the right to a universal public education to the long-term devastating impact of the Supreme Court’s decision to hijack the fundamental freedom to decide for ourselves when and how to have a family.

Allowing more powerful, more privileged “pregnant persons” the legal right to have powerless, non-privileged humans killed constitutes the “promise of America”? And here I thought the promise of America was to recognize that all men are created equal and endowed by our Creator with the unalienable right to life. Has Pringle read any books on history, civics, or government other than Howard Zinn’s People’s History of America and the 1619 Project?

Allowing a coach the freedom to choose to pray silently on a football field after a game constitutes an attack on religious freedom?

Providing school vouchers that help give impoverished families a tiny bit of freedom to choose where and how their children are educated constitutes threatening the right to a universal public education?

What Pringle and her thought-control collaborators don’t want is for moms and dads who must work two jobs in order to make ends meet to be allowed to choose not to have their children indoctrinated by leftists who want to turn public education into something it was never intended to be.

What if walking in their authenticity includes sadomasochism, polyamory, infantilism, or any other of the myriad paraphilias that delight fallen humans? Will Pringle encourage those students to love themselves fully and become who they are meant to be?

Who exactly intends people to be “gay” or “cross-sex” impersonators, and how does Pringle know that’s how some people are meant to be? Is it the mere presence of persistent, unchosen desire that tells Pringle how someone or something intended those people to be? Do all unchosen, powerful, persistent desires have to be affirmed, in order for humans to fully love themselves?

Pringle’s proclamations “We will say gay. We will say trans,” are an allusion to the Florida law that prohibits teachers from initiating conversations about homosexuality and cross-sex impersonation in grades K-3. Pringle has announced defiantly that creepy members of the NEA should violate Florida law in order to impose their socially constructed assumptions about sexuality on other people’s 5–9-year-olds.

Funny how leftists, who now treat the appointments of Brett Kavanaugh, Neil Gorsuch, and Amy Coney Barrett as an outrage and insult to the Democratic process, were never exercised when, according to Politico,

We have weathered countless attacks on our profession, on us. We have become exhausted by the demands created by a crippling educator shortage. We have felt our voices grow hoarse from demanding professional pay and the respect we deserve.

Maybe the NEA has something to do with the crippling educator shortage.

Maybe liberty-loving young people don’t want to enter the teaching profession because it is controlled by leftists who demand ideological conformity from faculty, who demand that teachers promote sexual deviance and ideas derived from critical theory, and who disrespect parental rights and transparency.

Maybe veteran teachers are dropping out for the same reasons.

Maybe leftist “educators” are getting paid too much and are getting all the respect they deserve.

the largest 25 organizations “that are actively working to diminish a student’s right to honesty in education, freedom of sexual and gender identity, and teacher autonomy.”

Maybe they object to the NEA’s plan to “spend more than $47 million to elect friendly candidates …, pro-labor judges, lobby for or against legislation, and support state and local affiliates in ballot measure campaigns.”

Maybe they object to the NEA’s decision to “publicly stand in defense of abortion and reproductive rights and encourage members to participate in activities including rallies and demonstrations, lobbying and political campaigns, educational events, and other actions to support the right to abortion.”

The self-important Pringle arrogantly declares to the NEA members the importance of the NEA’s work:

You understand that our work is fundamental to this nation. You have accepted the profound trust that has been placed in us.

No, the work of the NEA is not fundamental to this nation. In reality, the NEA’s work is fundamental to no one and nothing but leftist ideologues—their beliefs, their systems, and their socio-political agenda.

No leftist event would be complete without an attack on the 2nd Amendment, and Pringle did not disappoint. She claimed to have “listened to the stories of young people who experience gun violence in their communities every day,” but Pringle never mentioned that virtually every mass killer in America’s history has come from a broken, dysfunctional family. Leftists can’t say that because they are committed to the lie that all family structures serve children equally.

The NEA’s work contributes to the slaughter of the unborn; to a false understanding of sexual differentiation, sexual ethics, marriage, and family; to an imbalanced/erroneous view of history; to the dismantling of democratic institutions; to the erosion of liberty, tolerance, ideological diversity, and civility. The NEA is destroying public education, disrespects parental rights, and foments division. The NEA is plucking out all the threads that hold society together.

You have found a way to resist even as you hold on to joy. Creative and courageous, prepared and persistent, you stand in the power of the N-E-A, and the NEA stands in the power that is you [wild applause for themselves].

Pringle waxes melodramatic as she focuses—not on the needs of children and their families—but on the weepiness of poor pitiful NEA members:

For over a year I have traveled this nation to listen to the voices of, to learn from and to be inspired by our NEA members. … I’ve listened to educators describe their challenges as tears stream down their cheeks.

Today’s “educators” live and move and have their being in narcissism, narrative, and DEEP FEELINGS, so anecdotes about themselves weeping are even better than self-congratulations.

There was little to inspire truth-seekers in Pringle’s performance, but there was this:

Resistance is the secret of joy.

It’s good to know that Pringle looks favorably on resistance, because finally parents are resisting the efforts of public servants to force their socially constructed views on the nature and morality of cross-sex impersonation, homoeroticism, and human slaughter on all American children.

I hope Pringle realizes that one person’s “attack” on the NEA is another person’s act of resistance—which Pringle believes is the secret of joy.