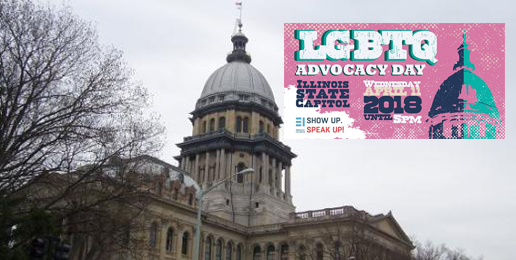 The noxious Leftist “Inclusive Curriculum” bill (SB 3249 and HB 5596) created by two Chicago-based homosexual/”trans” activist organizations (i.e., Equality Illinois and the Illinois Safe Schools Alliance) is moving through the Illinois Senate. The central goal of this costly and ideologically driven mandate that robs schools of local control is to use curricula in government schools to transform the way children think and feel about homosexuality and biological-sex rejection (aka as “transgenderism”).

If passed, this indoctrination bill will require that any “book or book substitute that will be used as a text or text substitute” in grades K-12 include the “role and contributions” of homosexuals and of men and women who adopt opposite-sex personas (also known deceptively as “transgender”).

In other words, all materials used in schools will be required to address the roles and contributions of people who define themselves by their disordered sexual desires and sexual behaviors.

In addition, this bill will require that “the teaching of history of the United States in public schools shall include a study of the role and contributions of lesbian, gay, bisexual, and transgender people in the history of this country and this State.”

This instruction shall be designed to teach that LGBT individuals have a rich history and have made substantial and valuable contributions to society, including government, arts, sciences, mathematics, sports, education, and in the economic, cultural, and political development of society. The instruction shall teach about the rich advocacy among the LGBT community and the LGBT community’s allies…. Instruction shall reinforce that all people, regardless of sexual orientation, gender identity, or gender expression [i.e., cross-dressing], have a right to be treated with civil, legal and human rights….

When possible, adults, including school district employees who openly identify as LGBT and other openly LGBT adults in the community that the school district may decide to consult with, should be involved in the development and delivery of this instruction at the discretion of the LGBT individuals.

There are no good reasons for teachers or textbooks to mention or discuss the sexual interests of contemporary or historical figures who have contributed something noteworthy to society. Their exceptional accomplishments should be noted, but their sexual proclivities—especially controversial sexual proclivities that many view as both immoral and destructive—have no place in public schools.

Would any lawmaker vote in favor of mandating that schools teach about the “roles and contributions” of polyamorists and poly-activists, or the roles and contributions of other communities whose identities are constituted by what many view as disordered desires and immoral volitional activities, like “amputee-wannabes,” infantilists, zoophiles, sadomasochists, and sibling-lovers (i.e., “Genetic Sexual Attraction”)?

“LGBTQ” activists take umbrage at such comparisons, declaiming that their sexual predilections constitute an authentic identity somehow set apart from those who identify as polyamorists, amputees, or babies, to which others may respond, “Who are you to judge?”

What if children or their parents experience such desires, engage in behaviors impelled by such feelings, or identify as poly, “amputee wannabes” or “infantilists”? What if they experience unwanted “minor attraction,” “genetic sexual attraction” or zoophilia? If homosexuals and “trans”-identifying persons should be able to see their predilections represented in curricula, shouldn’t other identity groups be able to see themselves represented in curricula? Should the accomplishments of people throughout history who experienced such feelings be excluded simply because they don’t yet have a powerful lobbying group that invents language that cloaks their beliefs in the appearance of objective facts?

We all know that schools—at least for now—wouldn’t teach about the accomplishments of polyamorists, “amputee-wannabes,” sibling-lovers, zoophiles, infantilists, or sadomasochists. Even if school leaders believed the feelings of persons in these groups were powerful, persistent, and unchosen, and even if school leaders believed biochemistry influences the development of their feelings, school leaders would not allow k-12 students to be taught that an important historical figure was a polyamorist, “amputee-wannabe,” sibling-lover, zoophile, infantilist, or sadomasochist. Why is that?

The reason is not merely that no one has yet demanded that they do so. The reason is that school administrators and board members—at least for now—believe the behaviors integral to those conditions are unhealthy, disordered, and immoral and that teaching about the role and contributions of those who engage in them would serve to normalize the phenomena.

Well, here’s an inconvenient truth: many believe the same about homosexuality and the science-denying cult of biological sex-rejection. What right have arms of the government (i.e., public schools) to treat the beliefs of Leftists on those two issues—homosexuality and opposite-sex impersonation—as if they were objectively true?

“LGBTQ” activists are so invested in exploiting taxpayer-funded schools to indoctrinate other people’s children that Equality Illinois is dedicating their annual “LGBTQ Advocacy Day” to pressuring lawmakers to pass the wildly inappropriate Inclusive Curriculum bill. This Wednesday, April 11, Equality Illinois is busing their supporters to Springfield for lobbying-training and lawmaker-goading.