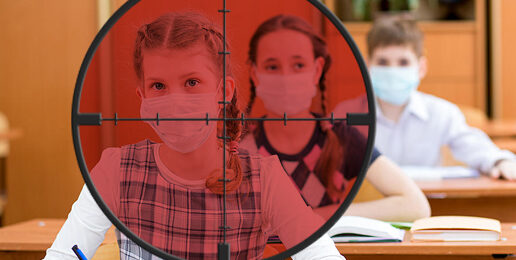 Schools across America are “weaponizing whiteness,” according to the scandal-plagued Southern Poverty Law Center (SPLC). To combat this alleged problem, teachers must let children run classrooms while indoctrinating them into hating the very foundations of the United States and viewing everything through the lens of “race,”  explained the far-left hate group.

Infamous for its grotesque bigotry against people of faith and even for inspiring a Christian-hating terrorist to attempt mass murder, the SPLC offers a range of materials to “educators” through its “Teaching Tolerance” program — a program that praised communist terrorist Bill Ayers as a role model for educators. Its latest initiative to further weaponize government schools by promoting “Critical Race Theory” is now drawing nationwide scrutiny.

It begins with a lie. “Weaponizing whiteness happens in schools every day,” reads a report about the supposed problem in the latest issue of the SPLC’s “Teaching Tolerance” magazine, which also works to promote homosexuality, transgenderism, hatred against Christians, and other controversial ideas in government schools. It is a bold claim from the SPLC. However, it is supported by zero credible evidence, as the piece itself shows.

The first actual example provided of this alleged “weaponization” of “whiteness” supposedly happening in schools is offered by “humanities” teacher Charles McGeehan, a guilt-ridden white man who founded an outfit (that seems to be mostly a Facebook page with 678 likes) called “Building Anti-Racist White Educators” (BARWE). Yes, seriously.

His oh-so-horrifying example of this alleged scourge is that “minor issues — like a student coming to class late or cutting class—end up spiraling into more serious disciplinary issues that can have dire consequences for students.” Yes, seriously: Consequences for tardiness or cutting class is the very first example of this ubiquitous plague said to be afflicting children all across America.

Simply being a teacher and doing what teachers are hired to do — exercise authority in the classroom while teaching children — makes McGeehan feel guilty over his racism. “I have to actively resist the urge to maintain power or control in my classroom, and especially to resist the anger that can bubble up in me when that control is called into question,” he told the SPLC.

The second example of this alleged “weaponization” of “whiteness,” even more ludicrous than the first, comes from a 2016 “study” using “eye-tracking technology.” According to the “study,” teachers — especially black teachers — were supposedly 8 percent more likely to look at black boys than white boys when looking for indications of “challenging behavior” in the classroom. Ironically, the same study found teachers were also more likely to look at white girls than black girls.

And yet, despite the almost comical nature of the easily discredited “findings” and conclusions, the fake media and the SPLC trumpeted this “study” as proof that teachers are somehow systemically racist against black children. Apparently, black educators supposedly being harsher on black children is also evidence of white supremacy and weaponizing whiteness.

Of course, there is a far simpler explanation than systemic racism and “implicit bias” for the findings. The number of black boys coming from single-parent homes is significantly higher than the number of white children, and every study that has looked at the issue shows children without fathers at home are far more likely to get in trouble. The same argument applies to the SPLC’s claim that black children are more likely to be referred to law-enforcement.

Incredibly, disciplining children without regard to race and even exasperated teachers crying in the classroom are offered as additional examples of the supposed weaponization of whiteness. Yes, seriously. Indeed, when a female teacher requests support from law-enforcement to deal with an out-of-control child, this is tantamount to “recreating the dynamics that were used as excuses for racial terror,” SPLC propagandist Coshandra Dillard claims in the fall 2020 issue of Teaching Tolerance.

Even teachers denying their racism and “weaponization of whiteness,” or insisting that they did not mean any harm, is inflicting “further damage” on children, according to the SPLC. Yes, seriously: If teachers refuse to confess their alleged guilt and collective sin stemming from their lack of sufficient melanin in their skin, they are somehow hurting children. Welcome to the absurd world of the SPLC and its allies in government “education.”

Ironically, studies show the sort of “diversity” indoctrination being advocated by the SPLC and other race-mongers actually makes people more racist. As the Harvard Business Review put it, “a number of studies suggest that it can activate bias or spark a backlash.” Of course, the SPLC and the race-mongers know this. But since they thrive on fomenting racism and hate to bring in money, it is no surprise to see them peddle quackery that encourages racism and hate.

The SPLC has a long and almost unbelievable history of absurdity. For instance, it was forced to pay millions of dollars after libeling a practicing Muslim as one of the world’s top “anti-Muslim extremists.” The group also smeared a top black law professor for supposedly enabling “white supremacy” by supporting border security. The SPLC even claimed a Cherokee Indian married to a direct descendant of Sacajawea as the “matriarch” of the “anti-Indian movement.”

Perhaps more alarming, the SPLC’s vicious hate-mongering even inspired homosexual terrorist Floyd Corkins to try to massacre employees of the Family Research Council for speaking against the LGBT agenda. Using the SPLC “hate map” as a guide, Corkins admitted to the FBI he was inspired by the SPLC and planned to rub Chik-Fil-A sandwiches in the faces of his victims after slaughtering them.

To normal people, the SPLC’s unhinged whining about the supposed “weaponization of whiteness” by school teachers probably sounds more like the rantings of a madman than a legitimate concern about a legitimate issue. However, despite the outlandishness of it all, the implications are deadly serious. The far-left group claims to reach over half a million educators, many of whom have also been conditioned by propaganda and substandard “education” into believing the absurdities of the Marxist ideology known as “Critical Race Theory.”

In addition to its widespread influence, the lies being peddled by the SPLC would lead to the collapse of the United States as a constitutional Republic guaranteeing God-given rights for all. For instance, in the SPLC rant on the “Weaponization of Whiteness in Schools,” the writer peddles the false notion that “anti-Blackness and white supremacy are baked into our country’s foundation.”

In reality, America’s Founders made a revolutionary claim that remains at the foundation of America: That all men are created equal and are endowed by their Creator with certain unalienable rights. The argued that this was a self-evident truth. But if the false narrative pushed by the SPLC about the nation’s biblical foundations in liberty were to become widely accepted, it would literally lead to the crumbling of the America that sits on those foundations.

More importantly, the racist arguments made by the SPLC are preposterous from a Christian perspective — and the overwhelming majority of Americans (whose taxes pay for public schools) continue to describe themselves as Christian. While the Bible speaks of tribes, nations, and tongues, the God of the Bible never divides people by “race.” In fact, the Scriptures never even mention “race” in the same sense as modern-day race-mongers such as the SPLC.

We encourage you to join us in our efforts. Your support will help us to continue our vital work in 2021. A vigorous defense of biblical truth is needed more than ever in Illinois. #GivingTuesday