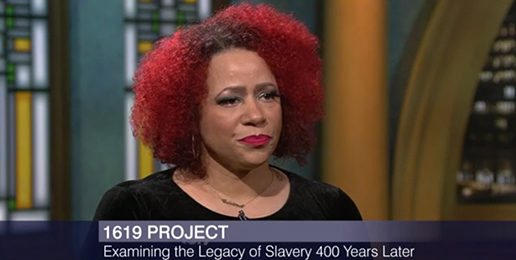 In Chicago Public Schools, captive students are being indoctrinated to believe that one of the very first societies in the world to end slavery was actually a monster defined by the evils of slavery — almost as if this monstrous nation had invented it.

This narrative is peddled despite the fact that the nation in question sacrificed hundreds of thousands of its finest men to eradicate slavery — not only ending it domestically, but eventually, worldwide, too.

And this slanderous lie is peddled despite the fact that institution of slavery has been ubiquitous throughout human history — at least until America and the Christian West put an end to it.

Indeed, in the African nation of Mauritania, slavery did not even become a crime until 2007, and the institution remains firmly entrenched there, as it does across broad swaths of Africa and the Middle East.

But supposedly, it’s America that is evil.

Welcome to the upside world of America’s “progressives” — the post-modernist absurdity where good is evil, evil is good, up is down, and truth does not even really exist.

During a recent visit to Chicago, self-styled “journalist” Nikole Hannah-Jones, a fringe left-wing race-monger, argued that the real history of America begins not with the Pilgrims in 1620, but with the almost unknown arrival of a slave ship the year before.

“It is a moment that is really at the basis for so much of American life, the very definition of American freedom, our culture, our politics,” claimed Hannah-Jones, founder of the so-called “1619 Project” and a prominent propagandist for the racist New York Times.

This absurd narrative has now been embedded into government schools in Chicago, with Hannah-Jones giving a “shout out” to CPS CEO Janice Jackson for forcing it on the child inmates under her control.

During an interview with the tax-funded “Chicago Tonight” show on WTTW, Hannah-Jones admitted that this is a “radical re-framing” of history.

Of course, it is also an absurd and shameful re-writing of history that turns reality upside down and deliberately misleads innocent children.

But in Chicago and beyond, radical anti-American activists have been working for decades to completely re-write U.S. history, literally flipping reality on its head for the purpose of undermining liberty and the United States.

In reality, America is a unique and special nation — perhaps the first to be founded on the biblical principles brought over by the Pilgrims.

This would lead directly to the creation of the first self-governing Godly republic since ancient Israel.

And eventually, this would lead to the ending of legal slavery worldwide and the near-universal acceptance of what America’s Founding Fathers said in the Declaration of Independence was a “self-evident” truth: the idea that “all men are created equal.”

Like virtually every society throughout all of human history, some Americans originally tolerated slavery.

However, it was because of America’s founding, and the biblical principles and worldview upon which it was founded, that this ubiquitous scourge was practically eradicated from the face of the Earth, beginning in the Christian West and then slowly spreading around the globe.

Before William Wilberforce in Britain would use God’s Word to explain why slavery was evil in the sight of God, many of America’s Founding Fathers were plotting to systematically end slavery for the first time in human history.

James Madison, the Father of the Constitution, for instance, was one of the original and most fervent anti-slavery crusaders to ever walk on the planet up until that time.

Calling slavery a “national evil” and blasting the slave trade as “criminal conduct” and a “violation of the laws of humanity,” Madison demanded in 1810 that Congress devise “further means of suppressing the evil.”

This “1619 Project,” though, wants Americans — and especially children in government schools who don’t know any better — to believe that the great Christians who made this all possible are actually the culprits for the evils they helped eradicate.

Naturally, the half-baked project is being spearheaded by the New York Times.

Ironically, though, the Times has a long and sordid history of this sort of racism and deadly dishonesty.

In 2018, for instance, the Times hired virulent racist Sarah Jeong to serve on its editorial board. Among other outrages, Jeong admitted it was “kind of sick how much joy I get out of being cruel to old white men.” She also argued that “white people” are “only fit to live underground like groveling goblins.” The raw, seething hatred shocked America, but the Times saw no problem with it.

Before that, Times “journalist” and Soviet apologist Walter Duranty helped the mass-murdering Bolshevik regime conceal its ghastly genocide of Ukrainian people via deliberate starvation. An estimated 10 million people were murdered while Duranty deceived Americans into believing everything was just fine.

Another Times “journalist,” Herbert Matthews, marketed mass-murdering communist butcher Fidel Castro to America as an “anti-Communist” so-called “freedom fighter,” even referring to him as the “George Washington” of Cuba. As a result, the nation of Cuba was enslaved and destroyed.

It is bad enough that a dying newspaper would peddle this sort of disgusting and dishonest propaganda to gullible “progressive” adults who pay to read that garbage.

But forcing these twisted lies on captive school children at taxpayer expense should be considered a crime. It is time for the people of Illinois to speak out.