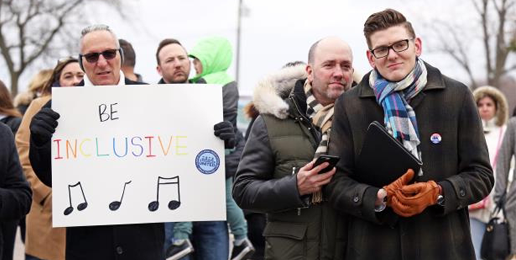 Reason #__ (oh, heck, I’ve lost count) for grabbing your kids and fleeing public schools: “teachable moments” and out and proud homosexuals in legal but fake marriages.

Seeing a big front-page Chicago Tribune photo of 30-year-old homosexual hipster Nathan Etter, who teaches music at Prairie View Grade School in Elgin, with a wee little boy holding Etter in a bear-cub hug was not a good way to start Wednesday. I should clarify: the little tyke appears to be a boy. I guess it could be a girl or a human who rejects the binary.

The photo—obviously designed to pull on the heartstrings of readers before they read—accompanies the story of Etter, whose “husband’’ sent him a bouquet of flowers on Valentine’s Day, which, Etter evidently placed where his first-grade students could see it. When some 7- year-old kids asked if the flowers were from his wife, Etter said no, they were from his husband. According to the Trib, Etter “answered honestly,” to which some students responded equally honestly, saying “ewww” and “gross.”

Etter then jumped on this “teachable moment,” which I’m sure caught him totally off-guard (yeah, riiight), to give a Leftist lesson on “respect, tolerance,” and the existence of families led by “two moms” or “two dads.” He offered this chastisement/instruction to his young charges: “‘Oh no, friends, we’re not going to have that response, because that’s not showing respect.’”

“Respect” means to hold in esteem. It should go without saying that no one has a moral or ethical obligation to respect homosexual acts, homosexual relationships, or same-sex faux marriage. In fact, Christians have a moral obligation to disapprove of all three. Homosexual activity and relationships dishonor those involved in them, marring the image of God imprinted on humans. Same-sex faux marriage is marriage de jure (in law) only. A union of two people of the same sex can never in reality be a marriage because marriage is something. It has a nature that we don’t create. We merely recognize a type of relationship that exists. The law can no more change an intrinsically non-marital union into a marriage than it could change a whole person into 3/5 of a person.

Does Etter demonstrate respect for those families who not only believe that homosexual acts and relationships are immoral but who also believe it is their duty to protect their children from exposure to ideas they believe are age-inappropriate?

The children who responded correctly—albeit politically incorrectly and indelicately (they were seven years old, after all) were not saying Etter is gross. They were expressing their proper feelings about Etter’s improper relationship.

It’s a grievous abuse of power for an arm of the government (i.e., public schools) or a government employee paid by taxpayers to teach other people’s children that they ought to hold in esteem homosexual relationships or same-sex faux-marriage. Government employees have no right to try to undermine children’s view that it is “gross” for two men to be in a homoerotic relationship. It is not only our ideas that must be properly ordered; it is our feelings, our sentiments as well. We should love that which is deserving of love. We should respect that which is deserving of respect. We should be repelled by actions that violate the design of our bodies and undermine human flourishing. People in homosexual relationships should be respected because they’re human. Their homosexuality per se is wholly undeserving of respect.

Fortunately, the parent of one of the students Etter lectured “contacted the district with ‘serious concerns’ about Etter’s comments.” The principal met with Etter, and then things turned ugly, culminating in a heated and crowded school board meeting on Monday evening. Apparently, Etter doesn’t respect or tolerate views that dissent from his. Apparently, he wants to be free to lecture students on his moral views of their moral views on homosexuality and marriage.

After his meeting with the principal, Etter whined to his union who then sent an email to all district staff and faculty claiming that “‘school leaders treated Etter in a discriminatory manner.’” On HuffPost, Etter’s fake hubby huffed, “‘This would have never happened if Nathan received flowers from his wife.’” No disagreement there. Marriage between a man and a woman is non-controversial. With the exception of a few radical Leftists like Masha Gessen who admit to wanting to destroy marriage, no one disapproves of marriage between one man and one woman. Commitments to equality demand that we treat like things alike. Homosexual unions are quite obviously different from heterosexual unions.

Etter doesn’t really want “tolerance” for his homosexuality or his marriage. He wants approval, affirmation, celebration. Historically, people understood tolerance to mean putting up with something one finds objectionable. It did not mean approving, affirming, or celebrating all the beliefs, feelings, and volitional acts of others. In a truly diverse and tolerant world, people are free to find homosexual acts, relationships, and fake marriages offensive, immoral, degrading, and even “gross.” And this may surprise Leftists, but it’s perfectly possible to hold such views while loving those who believe differently and act in accordance with their different beliefs. In a diverse world, most of us do it every day.

Etter also took umbrage that he was instructed to “stick to the curriculum.” How dare an administration try to limit teachers to teaching curricula when what Leftist teachers really want is absolute autonomy to use “teachable moments” to advance their moral assumptions as if they were objective facts.

“Authenticity” has become a euphemistic term exploited to rationalize immoral behavior and to silence disapproval of such behavior. It’s a manipulative rhetorical tool to confer moral goodness on immoral behavior by implying without proving that acting on intensely felt desires is intrinsically good and necessary for emotional health. It’s like a get-out-of-moral-assessment free card. Of course, authenticity doesn’t apply to those with dissenting views of sexual morality.

“Teachable moments,” another rhetorical gift reserved only for Leftists, just means any moment Leftists can seize on to pontificate on their moral or political assumptions in the classroom. All they need do is connect a topic, a passage in a novel, or a passing comment from a student to one of their moral or political beliefs or place Valentine’s Day flowers from homosexual lovers in the classroom to invite comments, and voilà, a teachable moment.

Etter said “he does not fear losing his job but said he was disappointed that he did not receive an apology.” Apology for what? For telling him to stick to curricula? For not groveling at the altar of his sexuality ideology?

It’s curious that in all the surrounding brouhaha, no one has suggested that perhaps the children Etter shamed are owed an apology.

The other photo accompanying the Trib’s homosexuality-advocacy piece is a big photo of little tykes holding signs that say, “We support Mr. Etter” and the truly ignorant slogan “Love is love.” Is it really? Are all types of loving relationships identical? Will the parents of these little ones trot their children out with that slogan when a teacher in a poly union exploits her “teachable moment”? What about when the teacher who’s in love with his brother exploits his “teachable moment”? After all, who are we to judge. Remember, love is love.