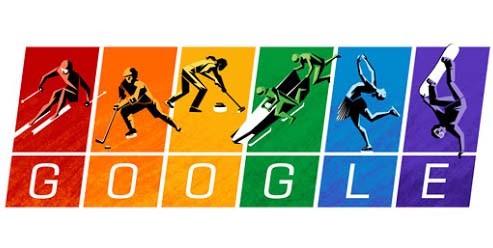 Google’s recent “doodle” announces to the world that Google is gaga over homosexuality-affirming propaganda for minors. Google’s doodle pokes a virtual rainbow-colored flag in the eye of Russian president Vladimir Putin for signing into law a bill that protects minors from homosexuality-affirming propaganda. A financial blockbuster of a company with roots in the country founded to “promote the general Welfare, and secure the Blessings of Liberty” pro-actively endorses the propagandizing of children while a corrupt totalitarian cockalorum opposes it. Curiouser and curiouser.

The fanciful notion that having “two mommies” is ontologically and morally indistinguishable from having a mother and a father is not a fact. Presenting that non-fact to, for example, five-year-olds in government schools is propaganda. And presenting this non-fact to children is not a loving act even if it “feels” good to “educators” who don’t think about or discuss the issue deeply.

The motive of the imperious Putin for signing into law Russia’s anti-propagandizing-to-minors bill may be to exploit moral beliefs he actually disdains in order to divide various and sundry constituencies around the world for his pernicious purposes, but a law that prohibits propagandizing to minors is not in itself pernicious.

Two people or two groups of people may have very different motives for pursuing the same goal. The fact that one person or group is motivated by hate and/or error doesn’t render the goal inherently evil or wrong. Some politicians may oppose the legalization of same-sex “marriage” because of their sincere (and true) belief that marriage has a nature fundamental to which is sexual complementarity. Other politicians may be motivated to oppose same-sex “marriage” by self-serving political ambition. The selfish motives of the politician who cares only about getting elected have no bearing on the soundness of the goal of opposing same-sex “marriage.” Only chuckleheads and Machiavellian political tacticians confuse motives and goals.

A defense of a law that seeks to prevent the exposure of minors to homosexuality-affirming dogma is not a defense of Putin, the cagey and cunning political animal.

Physical assaults on homosexuals, like physical assaults on any human being, are reprehensible and should be punished in accordance with laws prohibiting assault. But there is no evidence—to my knowledge, at least—that the legal prohibition of propagandizing to minors causes violence.

And here in the United States, there is no evidence to substantiate the related “progressive” claim that orthodox Christian doctrine and those who love Christ cause violence. The fact that hateful people may quote and misapply Scripture in defense of violent physical assaults or ugly verbal assaults on homosexuals no more means they’re Christians than the fact that someone quotes and misapplies Scripture in defense of same-sex “marriage” means they’re Christians. Humans have for hundreds of years abused Scripture for their own sinful ends.

Exposing minors to homosexuality-affirming propaganda is nowhere more troubling than in our public schools where neither children nor teachers are encouraged to study in depth all sides of issues related to homosexuality. Quite the contrary. Curricula and supplementary resources and activities are controlled by “progressive” dogma, the kind of dogma promulgated by the Gay, Lesbian and Straight Education Network (GLSEN). (Privately, “progressive” teachers actually scoff at the suggestion that there are sides other than theirs worthy of study.)

The propaganda begins in professional development opportunities for teachers in which teachers are never exposed to resources that dissent from the ideology of the “LGBTQ” community. GLSEN assumptions are treated as settled fact:

Ask any conservative public school teachers if their colleagues or administrators ever present resources that challenge “progressive” ideas about homosexuality in professional development meetings. And ask them if they feel as free to express their moral and political beliefs in faculty meetings (or in the classroom) as their “progressive” colleagues do.

“Agents of change,” secure in their tenured positions in public schools, share a certain esprit de corps with totalitarian regimes. They all hatch plans sub rosa to control the beliefs of others. Unfortunately, those victims—I mean, students—happen to be other people’s minor children.

Until our publicly subsidized educators relinquish their white-knuckled grip on curricula with their de facto enforcement of censorship, perhaps we need an anti-propagandizing-to-minors law.

Paraphilias of the Day: Pedophilia, Hebephilia, Ephebophilia, and Pederasty
b
a
x
r