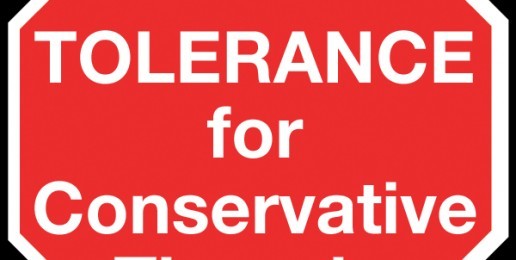 There’s troubling news coming out of Florida that provides evidence that the cultural movement to normalize homosexuality poses a serious threat to First Amendment speech and religious rights.

Mount Dora High School social studies teacher and winner of the 2010 “Teacher of the Year” award, Jerry Buell, wrote this on his private Facebook page during non-work time:

I’m watching the news, eating dinner, when the story about New York okaying same sex unions came on and I almost threw up.

If they want to call it a union, go ahead. But don’t insult a man and woman’s marriage by throwing it in the same cesspool as same-sex whatever! God will not be mocked. When did this sin become acceptable???

The administrative response to this veteran teacher’s condemnation of government-endorsement of abominable (God’s word, not Buell’s) relationships is to suspend him from the classroom and begin an investigation.

Society has become so desensitized to the offense of cesspoolish acts that calling them cesspoolish constitutes an offense. Our cultural moral compass has become so broken that citizens do not recognize that homosexual acts are, indeed, cesspoolish. In a very literal sense, the primary sexual act engaged in by homosexual men is cesspoolish in that a cesspool is a waste receptacle, but the term “cesspool” also refers to corrupt, depraved acts. Although Buell’s word choice was indelicate and politically incorrect, it strikes me as accurate. (For recent CDC information on HIV infections among Men Who Have Sex with Men (MSM), click HERE, and for shigellosis information click HERE.)

Christians have become deluded into believing that saying that homosexual acts are cesspoolish is an unchristian act, and they have been bullied into self-censorship by exactly the kind of repercussions Buell is experiencing.

Americans, including leaders in government, education, and even the church, increasingly accept the dangerous notion that the First Amendment should be subordinate to the “feelings” of homosexuals. What next? Will speech rights and religious liberty be subordinated to the feelings of “minority-attracted” persons (aka pedophiles) and polyamorists? How long will it be before yet another group committed to normalizing their particular sinful proclivity starts talking about how marginalized, stigmatized, and “unsafe” they “feel”?

The Mount Dora administration might defend their actions by citing the need to keep students “safe.” What school administrations rarely do, however, is define “safety.” The entire homosexuality-affirming juggernaut depends on the tricksy manipulation of rhetoric. “Safety,” which formerly meant the absence of physical threat, has now come to mean the absence of emotional or intellectual discomfort. Of course, liberal activists in public schools won’t admit this (and conservative teachers are too fearful to expose it).

Intellectual and ethical consistency — never the forte of liberals — is not found in public schools even on the topic of “safety.” Liberal activists have no problem making conservative students feel uncomfortable (i.e., “unsafe”) if it’s in the service of eradicating conservative moral beliefs. In so doing, increasing numbers of homosexual students and their “allies” (another rhetorical buzz saw in the homosexuality-normalizing tool box) are becoming presumptuous ideological dictators. They treat all encounters with dissenting moral propositions with high dudgeon and an expectation of administrative censorship.

The exaltation of subjective feelings through the self-actualization and self-esteem movements and the demonization of shame have collided with the tyrannical homosexual “rights” revolution, resulting in the cultural collapse that’s happening right in front of our eyes. (And what do conservatives do? Cover their eyes, plug their ears, and shut their mouths.)

My advice: exercise your right to express unpopular ideas while you can.

1. A fellow conservative with whom I discussed this article prior to posting expressed concern over any mention of sexual acts, arguing that we should not “dwell” on them.

I completely agree: dwelling on sexual acts is neither necessary nor constructive. I wish we had a society that valued modesty and privacy, but we don’t and the other side is making public statements about sexual acts and promoting images and ideas about sexual acts that are shaping the beliefs of Americans.

The current cultural problem is not that conservatives dwell on sexual acts, but that we ignore them. In my approximately 800-words above, I have about 80 words that address sexual acts. That hardly constitutes “dwelling.”

We are derelict in this cultural battle if we cede through silence the battle about the true nature of homosexuality, including the sexual acts in which homosexuals commonly engage. Our silence — which the other side covets — leaves homosexuals free to create and promulgate an unchallenged message. Even our high school comprehensive sex ed classes, purportedly concerned with adolescent health, rarely provide to students information on the astonishing array and rate of sexually transmitted infections associated with what the CDC calls Men Who Have Sex with Men (MSM).

2. Over the weekend, I was sent a Christian Post article in which Neuqua Valley High School math teacher, Hemant Mehta, weighed in on the suspension of Jerry Buell. IFI readers may remember Mehta, or as he refers to himself and his blog, the “friendly atheist,” about whom I’ve written several times.

Initially, Mehta, who, according to the Christian Post views Mr. Buell as a “bigot,” wanted to “join in the backlash,” but some soul-searching restored Mehta’s reverence for the First Amendment. In his statement, Mehta implied that a situation involving IFI’s response to his blog was analogous to the Buell situation.

Several clarifications are in order. As I wrote in 2009, I did, indeed, contact Mehta’s administration and school board regarding something he had written on his blog, but I did not contact them because of his moral views or in order to have him suspended. In fact, I specifically said, “Of course, teachers have a First Amendment right to blog or speak publicly about anything they want.”

I contacted his administration and school board because Mehta had suggested on his public and widely read blog that it would be a good thing if homosexuals came and kissed in front of my home. His entire blog is an expression of his controversial social, political, moral, and philosophical beliefs, and I had never previously contacted his administration or school board. His suggestion, however, that homosexuals come to my home — whether delivered in jest or not — constituted an irresponsible, unprofessional comment that may have violated school policy regarding employee-community relations.

In subsequent articles, I urged parents to think about whether a teacher who publicly uses obscene language and vigorously promotes polyamory and atheism is a good role model for their children. The First Amendment prohibits the government from abrogating the right of citizens to express even unpopular ideas. It does not prohibit parents from making choices about the people with whom their children spend 180 hours a week.

One final note: I have met Hemant and find him a very nice person. Many people believe that condemnation of actions or passionate intellectual disputes indicate dislike or hatred of our worthy opponents. That’s nonsense or worse.

It’s not only possible but commonplace to like, value, enjoy the company of, and even love those whose beliefs and behavioral choices we find foolish and destructive.