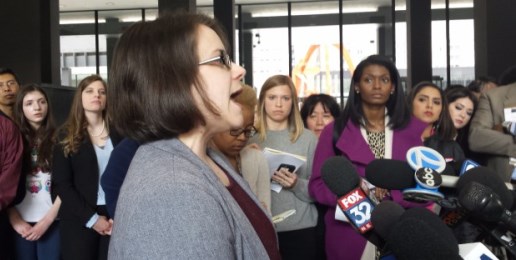 On Wednesday afternoon, Alliance Defending Freedom (ADF) and the Thomas More Society filed a lawsuit in federal court against School District 211 and the Department of Education (DOE) on behalf of 51 district families who rightly claim that the district and the Department of Education “trample students’ privacy” rights and create an “intimidating and hostile environment” for girls who are being forced to share the girls locker room and restrooms with a boy who wishes he were a girl.

The lawsuit claims that the DOE’s reinterpretation of Title IX, which prohibits discrimination based on sex, is unlawful. The DOE through its Office for Civil Rights claims that the word “sex” in Title IX actually includes “gender identity” and “gender expression,” thereby prohibiting schools from maintaining separate restrooms and locker rooms for boys and girls.

There’s only one wee little problem with that fanciful interpretation. Title IX specifically states the following:

[T]itle IX of the Education Amendments of 1972…is designed to eliminate (with certain exceptions) discrimination on the basis of sex in any education program….A recipient [of federal funds] may provide separate toilet, locker room, and shower facilities on the basis of sex, but such facilities provided for students of one sex shall be comparable to such facilities provided for students of the other sex. [emphasis added]

According to the Chicago Tribune, ACLU spokesman Ed Yohnka waxed indignant over opposition to a boy in the girls locker room and restrooms and to the conventional and proper use of pronouns to denote objective, immutable sex:

Ed Yohnka…called the lawsuit a “sad development by groups opposed to fair and humane treatment of all students, including those who are transgender.”

He also bristled at the lawsuit’s repeated reference to the transgender student as “he.”

“It’s pretty offensive that they don’t even fundamentally acknowledge that our client is a girl,” Yohnka said.

I regret being so graphic, but Yohnka’s idiotic statement makes it necessary: Girls don’t have penises.

The Left takes umbrage if anyone dares to dissent from their doctrinaire notions about sex and grammar. Tyrannical Leftists demand that biological males who wish they were female be treated as if they are in reality female—even in womens showers. The Left demands that everyone join them in their delusional charade.

District 211 superintendent Daniel Cates said “students have shown acceptance, support and respect of each other,” evidently meaning that students don’t object to sharing restrooms and locker rooms with opposite-sex students. If true, is that a good thing? Has the culture successfully indoctrinated all our young people with the lie that acceptance and respect of those who suffer from gender dysphoria require sharing restrooms and locker rooms with opposite-sex persons? Doubtful.

Should the delight of teens in sharing restrooms and locker rooms with opposite-sex students determine policy? If physical embodiment matters and if modesty is a virtue derived from physical embodiment, shouldn’t schools create policies that reinforce those truths?

The issue of objectively male students using girls private facilities is not solely about the risk of assault—though that risk exists. The central issue concerns the meaning of physical embodiment as male or female, particularly as it pertains to modesty and privacy.

When gender-dysphoric persons who wish they were the opposite sex say they don’t want to use restrooms or locker rooms with persons of their same sex, they are saying there are fundamental and significant differences between men and women. Further, they are necessarily saying that their desire to use opposite-sex restrooms is based on objective bodily differences. They are demanding privacy based on objective sex differences while denying that privacy to others.

How refreshing and encouraging it is to see parents boldly challenging the incoherent and indecent actions of “progressives” in government schools. Please pray for these families and the success of their lawsuit.