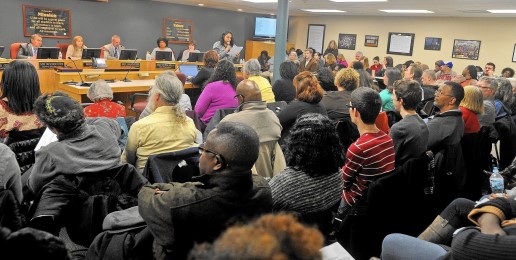 A close look at the comments of a senior student (referred to henceforth as student X) from Elgin High School who spoke (and was quoted in both the Daily Herald and Chicago Tribune) provides evidence of the ignorance and hubris of “progressive” teens who are the products of the ignorant and tyrannical anti-culture that pervades taxpayer-subsidized schools. Her comments encapsulated many of the flawed arguments Leftists use to defend co-ed restrooms and locker rooms.

Student X began by incorrectly claiming that “transgender individuals are…by law allowed to use the bathroom or locker rooms that corresponds with their gender identity. Illinois provides nondiscrimination protections on the basis of both gender identity and sexual orientation”

There are no such federal or state laws. In fact, the Illinois Human Rights Act specifically states that “The Act permits schools to maintain single-sex facilities that are distinctly private in nature, e.g., restrooms and locker rooms.”

Requiring restroom and locker room usage to correspond to biological sex is no more unjustly discriminatory than is requiring school showers to be sex-segregated—which U-46 and every other school district does.

By requiring the U-46 student at the center of the controversy to change in a privacy cubicle under the supervision of a staff member, the board is implicitly acknowledging that biological sex matters deeply. Parents who oppose gender-dysphoric students using opposite-sex locker rooms are saying the very same thing. They’re just applying the principle rationally.

Student X then listed a litany of truly sad afflictions that plague the gender-dysphoric population, including high rates of physical and sexual assault, bullying, depression and suicidal ideation, all of which suggest that gender-dysphoria is profoundly disordered and that in some cases—perhaps many—the cause of gender dysphoria may be external (e.g., sexual assaults or other trauma)—rather than innate.

What student X did not explain is how co-ed locker rooms and restrooms would solve the many problems she listed. If her chief concern is ensuring that gender-dysphoric students are not bullied or assaulted in restrooms and locker rooms that correspond to their sex, U-46 can provide them with access to single-occupancy restrooms.

But ensuring safety isn’t the chief goal of student X or “trans” activists. Their chief goal is compelling everyone to treat those who rebel against their sex as if they are in reality the sex they wish they were. But the desire and demand of gender-dysphoric persons to be treated as if they are the sex they are not does not supersede the rights of others to physical privacy. And despite what “progressives” claim, gender-dysphoric boys have no moral right to use girls’ facilities, and gender-dysphoric girls have no moral right to use boys’ facilities.

Student X finds fault with community concerns over student safety if gender-dysphoric students are allowed into opposite-sex restrooms and locker rooms. Student X and others imply that prohibiting gender-dysphoric students from using opposite-sex facilities puts them at risk, but as already discussed, that is a a risk that can be eliminated by providing access to single-occupancy restrooms.

What student X and others ignore is that if Leftist locker room and restrooms policies are permitted, there remains no way to limit co-ed restrooms/locker rooms to gender-dysphoric students only. If the public is forced to accept the absurd idea that it is unjustly discriminatory to separate restrooms and locker rooms by sex, then there remains no rational argument for maintaining any sex-separated facilities. And the elimination of sex-separated restrooms and lockers rooms does, indeed, put girls at risk.

But an equally or more important argument against co-ed restrooms and locker rooms pertains to the intrinsic meaning of biological sex from which feelings of modesty and the desire for privacy derive.

Student X concluded her comments by challenging the audience to guess her sex (I’m guessing female, hence my use of female pronouns). She was trying to make the point—and again, I’m guessing—that if a person’s sex is in some cases difficult to discern, biological sex is unimportant.

She reinforced her belief that it is impossible to discern the sex of some students by pointing out that gender-dysphoric students often disguise their sex through cross-dressing, cross-sex hormone-doping, and surgery. Apparently her point was that if humans can masquerade as the opposite sex so successfully that others are deceived, then biological sex has no intrinsic meaning. She was evidently suggesting that if, for example, a gender-dysphoric boy can through clothing, chemicals, and surgery successfully convince girls that he is objectively female, those actual girls have no right to physical privacy.

Student X also made this ludicrous statement: “Biology, psychology, sociology and any other science that has to address sex differences all support the idea that sex is a spectrum.” Student X declared imperiously that “Sex is a spectrum! Fact!”

Interestingly, she then cited intersex conditions—which are wholly different from gender dysphoria—as evidence for her claim. She specifically mentioned trisomy conditions in which children are born with extra chromosomes that result in a host of serious health problems including ambiguous genitalia, heart problems, and sterility.

In stark contrast, self-identified “trans” persons have no genetic anomalies. Therefore, with male or female brains that determine the release of male or female hormones, their bodies develop and function normally as males or females.

The problems of sexual development caused by missing or extra chromosomes are no more normal or good than are the sterility and heart problems caused by missing or extra chromosomes. These problems of sexual development are not proof of the existence of a sex-spectrum. Would student X argue that genetically caused blindness is evidence of a vision-spectrum?

Student X demanded that the board tell her how the school could possibly enforce single-sex bathroom and locker room policies: “How are you going to enforce that? Have students carry their birth certificate around? Require them to show you their genitals before entering? Put “F” or “M” on student I.D.s?”

In bygone years, decency, honesty, and respect for sexual differentiation existed and were sufficient to ensure widespread compliance with bathroom expectations.

Perhaps student X could explain how school administrators will ensure that only students who are gender-dysphoric will use opposite-sex restrooms and locker rooms?

What kind of proof will gender-dysphoric students be expected to provide to prove they are “trans”?

Which restrooms and locker rooms will “gender fluid” or “gender non-binary” students use?

And what about the estimated 70-88% of children with gender dysphoria who will come to accept their sex by adulthood? Should other children be forced to share restrooms and locker rooms with opposite-sex students who experience a temporary period of discomfort with their sex?

What should conservatives do?

The U-46 School Board has stated that it has no intention of revisiting the secretly adopted practice of allowing students who reject their biological sex to use opposite-sex private facilities—no matter how the community feels about this decision.

The majority on the board believe that inclusivity and compassion demand that girls and boys relinquish their privacy. Girls and boys who don’t want to share locker rooms or restrooms with students of the opposite sex must seek special accommodations from the anti-science ideologues who run the district. Girls who don’t want to change clothes near a boy in the girls’ locker room will have to move elsewhere—oh, yes, and be labelled hateful, exclusionary, discriminatory, heartless bigots.

“Progressive” and cowardly administrators respond to three things (none of which is reason):

3.) Lawsuits: Lawsuits are the Big Kahuna. Lawsuits speak with the loudest voice to school boards and administrations. Unfortunately, progressives are much more willing to sue school districts than are conservatives—particularly naïve Christians who think words of reason winsomely expressed will effect change. Conservatives need to disabuse themselves of that quaint and quixotic notion. The well-being of children is at stake. Leftists pursue their perverse goals for a more comprehensive sexual revolution with a fervor unmatched by conservatives. It’s time conservatives match Leftist fervor, boldness, tenacity, perseverance, and ingenuity. Parents of U-46 students should contact the Thomas More Society at (312) 782.1680 and pursue a lawsuit just as 50 families in District 211 are doing.

The Left wants to end the historical and commonsense practice of requiring that restrooms and locker rooms correspond to objective, immutable biological sex. Instead, Leftists want restrooms and locker rooms to correspond to subjective, unfixed, and unverifiable feelings about one’s sex. And the Left will not cease until the wobbly knees of every school administrator bow before this anti-science, anti-morality, anti-child ideology. If U-46 CEO Tony Sanders and board members Traci O’Neal Ellis and Veronica Noland think the privacy cubicle for gender-dysphoric students will long be tolerated by Leftists, they’re sorely mistaken.

District U-46 has an election coming up next April. Board president Donna Smith (who has served on the board for fifteen years) and board member Veronica Noland are up for reelection and need to be given the heave ho if for no other reason (and there are other reasons) than to establish balance and fair representation for a segment of the U-46 community that is currently underrepresented. Surely, in the second largest school district in the state, two fine conservatives can be found to give Smith and Noland a run for their money.

Signatures must be gathered and turned in by December 23, so get moving folks!

Finally, thank you to everyone who prayed for the U-46 School Board meeting on Monday evening, and a special thanks to those who attended and spoke.

Please prayerfully consider how you can support
the work and ministry of IFI through a donation.