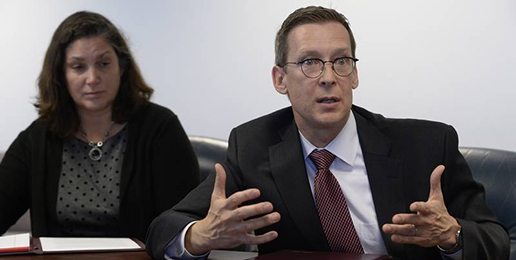 ACLU attorney John Knight who represents the gender-dysphoric boy in the lawsuit against District 211 has issued this statement about the agreement reached between the district and the Office for Civil Rights (OCR)—a clarification that should deeply trouble District 211 community members:

We also remain disturbed by the inaccurate, misleading and fundamentally troubling language used by the District, even as they adopt this agreement. For example, the District said last night that transgender students who are provided access to locker rooms consistent with their gender identity “will utilize a private changing station when changing clothes or showering” and will not be allowed unrestricted access to the locker room. This is not what the agreement with OCR provides. The agreement specifically says that “based on Student A’s representation that she will change in private changing stations in the girls’ locker rooms, the District agrees to provide Student A access to locker room facilities designated for female students at school.” Nowhere does the agreement require Student A to use a private area to dress and such a requirement would be blatantly discriminatory. [emphasis added]

According to the ACLU of Illinois, the Office for Civil Rights “clearly stated that our client, like all students, does not have to use a privacy curtain. She may choose to do so, but she is not required to use the privacy curtain under the settlement.”

To my non-attorney eyes, it appears that Knight and the OCR are correct. This is what the agreement actually states:

For the duration of Student A’s enrollment in the District:

1. based on Student A’s representation that she will change in private changing stations in the girls’ locker rooms, the District agrees to provide Student A access to locker room facilities designated for female students at school and to take steps to protect the privacy of its students by installing and maintaining sufficient privacy curtains (private changing stations) within the girls’ locker rooms to accommodate Student A and any students who wish to be assured of privacy while changing;

There is no requirement that the boy use the private changing stations.

Moreover, again according to the ACLU of Illinois, the OCR claims the agreement between District 211 and the OCR “applies to all students, not just our client,” which directly contradicts what the district is claiming in its Frequently Asked Questions:

Will this Resolution Agreement require specific locker room access for all transgender students in District 211?

No. The Resolution Agreement pertains to one student in District 211 — the student who filed the original complaint with the Office for Civil Rights.

Will this Resolution Agreement require specific locker room access for transgender students in all school districts throughout the state and nation?

District 211 taxpayers should be troubled by either the incompetent lack of understanding by district leaders or their deception.

In another frequently asked question, the district admits that the school which the gender-dysphoric boy attends will not be identified and that no parents will be notified if a gender-dysphoric student will be using a locker room with their sons or daughters.

[T]he District continues to demonstrate a wanton ignorance of the science of gender by persisting in drawing a false distinction between transgender persons’ gender and anatomy. Let me be clear. My client is a girl – full stop.

The District’s refusal to accept transgender students as girls and boys is extremely harmful for all students, but especially those who are transgender. We had hoped the District would embrace this moment as an opportunity to educate itself and its community about what it means to be transgender. Unfortunately, that has not happened.

Precisely what “science” proves that there exists no distinction between gender-dysphoric persons’ “gender and anatomy”? If there were no distinction between their “gender” and anatomy, then gender-dysphoric persons would not be lopping off breasts and penises, shaving down Adam’s apples, adding fake breasts, and taking puberty-blockers and dangerous cross-sex hormones.

No one is obligated to accept the a-scientific proposition that the descriptor “girl” refers to a psychological condition rather than a biological condition. Mr. Knight’s client is a boy—full stop.

Did you hear?  IFI has been given a challenge match of $55,000. So, between now and the end of the year, you can help us raise $110,000!  Please consider making an end-of-year donation to help us stand strong!