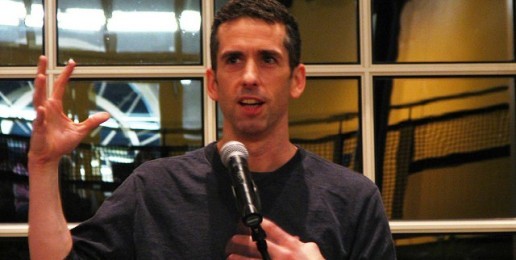 My article on Dan Savage’s upcoming speaking engagement at Elmhurst College was posted and sent out late Monday afternoon. By early Tuesday morning, we discovered that several of Savage’s YouTube videos had been “removed by the user,” including two of the videos for which I had provided links in my article. One of those is the video in which Savage savages Christians in general and Family Research Council’s Tony Perkins in particular, using hateful, vulgar language.

Subsequently, I discovered that a Savage video I had referenced in an earlier article has been removed also. That one was titled “How to Come Out to Your Evangelical Family.”

Since multiple videos in which Savage discusses perverse sexual practices in obscene language remain on YouTube, it appears that the videos that have been removed are those in which Savage expresses virulent anti-Christian bigotry using language so hateful, he makes Reverend Fred Phelps look like a choir boy.

Elmhurst College administrators must be happy about the removal of these videos, since they’ve been busy doing damage control in the past few days over their foolish decision to invite Savage to speak at Hammerschmidt Chapel this Sunday.

Elmhurst College’s Managing Director of Public Affairs, Desiree Chen, is sending out this letter to critics of Dan Savage’s invitation:

Many of our speakers are controversial to one segment of society or another, and Mr. Savage is no exception. While we understand that Mr. Savage writes a newspaper column that deals with provocative topics and sometimes addresses them in debatable ways, the column is not why he was invited to speak here, and is not the topic of his presentation.

Mr. Savage will talk about the It Gets Better Project, which he created in 2010 in response to a number of heartbreaking incidents in which young students took their own lives after being bullied in schools across the country. Mr. Savage’s project invites mature people to create online videos that support and reassure young people facing harassment. The videos are specifically aimed at struggling lesbian, gay, bisexual and transgender youth. Their message is one of hope for a life of dignity in a society that needs their service and perspective. The Project has led to the creation of more than 40,000 videos, which have been viewed more than 40 million times.

It is important to note that an invitation to speak at Elmhurst College does not represent an unqualified institutional endorsement of everything the speaker says or does, here or elsewhere. We ask a speaker to come here because we believe that he or she has something significant to say that is worthy of the consideration of our campus and the larger community. Not everyone will agree with all of our selections; but we do try to achieve a balance of thought-provoking speakers and topics.

What remarkably euphemistic, reductive language and compartmentalization Ms. Chen employs in the service of defending the indefensible. Savage’s advocacy for extramarital sexual dalliances and  his lighthearted approval of using excretory functions as sexual practices are merely “provocative topics” and calling Christians “bat sh*t, a**h*le, dou**ebags” is merely a “debatable way” of talking about theological differences.

Does Ms. Chen believe that Reverend Fred Phelps’ similarly hateful beliefs about homosexuals constitute merely a “provocative topic” and that the rhetoric Phelps uses to describe them is merely a “debatable way” to talk about that topic?

Chen, speaking for the Elmhurst College administration, goes on to defend Savage’s invitation based on the fact that he was not invited to talk about his sexual ideology. Rather, Elmhurst invited him to speak about his much-viewed “It Gets Better” online video project, which she asserts promises “hope for a life of dignity.”

Chen is asserting as fact the disputable notion that telling hurting kids that embracing a homosexual life offers them hope for a life of dignity. Many, however, would argue that the embrace of a homosexual life effaces human dignity and compromises human flourishing.

Moreover, neither the number of video submissions, nor the number of viewings mean that the project is a good one or  justify hiring a speaker who uses the very same kind of ugly, hateful, bigoted language that he claims hurts teens. What utter hypocrisy to invite a man to speak against bullying who calls people “bat sh*t, a**h*le, dou**ebags” and who recently called teens “pansies” who walked out during one of his anti-Christian rants.

Even those who believe that the “It Gets Better” project has value should be able to see that Savage’s other public work is so corrosive , so puerile, so hateful, and so obscene as to render him a lousy advocate for a life of dignity and a woefully unsuitable guest speaker.

I wonder if in the service of exploring provocative topics and trying to “achieve balance,” Elmhurst College will invite a speaker to explore ideas that oppose Savage’s, preferably in less “debatable ways.”

I wonder too how much Elmhurst College paid Savage.