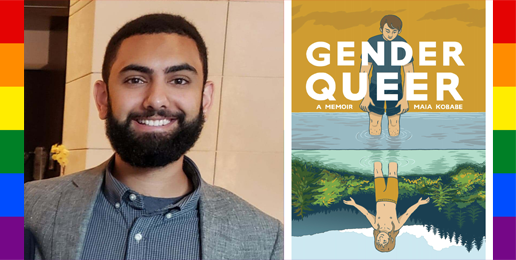 Chicago Sun-Times education reporter Nader Issa offers a classic example of biased opinion writing masquerading as objective reporting in his “news” narratives about a recent controversy in the Chicago suburb of Downers Grove over an obscene “graphic memoir.” The memoir, titled Gender Queer by Maia Kobabe, may sound familiar to IFI readers. I wrote this about her memoir in early August 2021:

Maia Kobabe, author of Gender Queer: A Memoir, which is carried in high school libraries, tells the peculiar tale of her journey to her “identity” as a genderqueer, asexual woman with a lesbian aunt and a sister who dates a woman who pretends to be a man.

The far-left American Library Association awarded Kobabe an Alex Award for her “graphic” memoir. Her memoir is graphic in both senses of the word. It’s a sexually explicit, 240-page comic book about her journey into sexual confusion and perversion. Kobabe, who uses the “Spivak” pronouns ey/eir/em, also teaches art workshops to middle school children, mostly, she says, “AFAB” girls, which means “assigned female at birth.” Kobabe evidently doesn’t know that children aren’t assigned either a sex or “gender identity” at birth. That’s not a thing obstetricians do. Obstetricians identify the objective sex of babies at birth, a characteristic that never changes.

Public school kerfuffles over Kobabe’s obscene memoir have been justifiably emerging as parents learn that their children’s schools carry it, and one of those kerfuffles took place at a Downers Grove School Board meeting on November 15.

Issa mischaracterizes community criticism of the book as an “attack on literature” about “gender.” What in Issa’s view distinguishes an attack from criticism? And does he think that books about “gender” that don’t include obscene language and images would be under similar “attack”?

The paranoid Issa implies critics are part of a vast right-wing conspiracy of “conservative politicians, activists, commentators and small networks of parents” to “denounce and ban progressive teachings in school.” He’s unfortunately right on two things; “progressives” are the peddlers of deviant and graphic sexuality, and they are using public schools to disseminate their sexuality ideology.

If Issa is bothered by the shared goals of conservative politicians, activists, commentators, and small networks of parents who are working toward cleansing schools of controversial leftist materials, he must really be troubled by the shared goals of leftist politicians, activists, academicians, commentators, and large networks of parents to systemically entrench leftist ideas about sexuality (and race) in curricula, resources, professional development, and activities.

Just as Issa referred to “some” parents and said some critics have “claimed” in order to discount the views of critics of Gender Queer, he also referred to “small” networks of parents. Perhaps Issa isn’t aware of the intimidation, bullying, mockery, name-calling, and shaming conservative taxpayers experience when they criticize pro-“LGBTQ” resources used in schools to advance leftist assumptions.

And perhaps Issa didn’t realize that “small networks” of conservative parents are now the minority, and minority voices are all the rage. Maybe Issa is an ideological neanderthal who believes might and numbers make right.

Issa dismisses the offensiveness of Gender Queer by saying it’s only “A few pages that include illustrations of sexual acts” that “have drawn the bulk of the ire.” First, it’s not just obscene drawings about which critics are angry. It’s also obscene language.

Second, how many pages of obscene images would it take to render a novel, memoir, or comic book inappropriate for purchase with taxpayer dollars for minors?

Issa calls attention to the “other students, parents and community members” who see the book as a “vital tool for youth discovering their identity and any efforts to ban it as censorship.”

Vital? Really? Gender Queer is necessary to the continuation of life? However did kids survive before Kobabe wrote her obscene comic book?

I wonder how many books the Downers Grove high schools have that critique leftist gender theory? How many resources do they have about detransitioners? If the answer is none, why would that be?

Issa didn’t mention whether there are any leftist politicians, activists, commentators, and networks of parents who share the goal of keeping Gender Queer and other obscene novels and plays in school libraries.

Issa mentioned that three students spoke in favor of keeping Gender Queer in the library. One student defended it by saying, that “it’s not being forced upon” students. Well, I guess Downers Grove parents should be thankful that teachers aren’t forcing their children to read it, but that comment fails to address the issue. The issue is, should taxpayer subsidized schools purchase and make available to minor students obscene material. Any parents who want their child to read Gender Queer can buy it for them, or kids can buy it themselves.

An 18-year-old student shared that Gender Queer “has scenes in it that are mature and sexual … [but] it’s not like we haven’t been given books with sex in them before.” Ain’t that the truth. School libraries and curricula are chock full of Young Adult (YA) books with graphic sex. Gender Queer is not an isolated library purchase. I would, however, dispute the claim that the obscene scenes in Gender Queer are “mature.” In this context, “mature” is a euphemism for vulgar and obscene.

The 18-year-old, Josiah Poynter, continued: “Inclusion matters to young people. … This is why we must have this book in our school’s library. Inclusion brings an opportunity to grow in a safe environment.”

Poynter is right. Teens and virtually every other human want to feel included, but inclusion must not trump truth. Inclusion must not entail affirming all feelings, beliefs, and acts. Neither inclusion nor the provision of a safe environment should entail the eradication of all moral boundaries.

According to Issa, Superintendent Hank Thiele said Gender Queer “met the district’s requirements for inclusion in its library.” Yikes. Someone better take a close critical look at those requirements.

Let’s be really blunt about this. If you are a grown adult and you are walking through a library in an elementary school or high school and having sexual thoughts, you are the problem. It ain’t the book.

Let’s be really blunt about Casten. If he thinks adults who oppose taxpayer-funded schools spending taxpayer funds to make obscene garbage like Gender Queer available to minors are “having sexual thoughts,” then he’s ignorant, creepy, and unfit for office. But this is what we should expect from a man who admires Dan Savage.

It’s Looting, Not Reparations
b
a
x
r