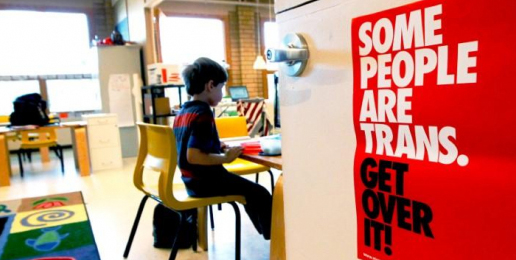 This past weekend, I contacted a committed Christian friend who is a public middle school administrator in another state to ask if his school mandates that staff, faculty, and administrators use incorrect pronouns when referring to “trans”-identifying students. He responded that his school does not currently have any such students; that neither the administration nor school board has discussed the issue; and that if or when a “trans”-identifying student demands to be referred to by incorrect pronouns, the administration will consult school attorneys about what to do.

I was, as the British say, gobsmacked.

The “trans” issue has been roiling the cultural waters for years now. Students who masquerade as the sex they are not are suing school districts; teachers are being fired for refusing to use incorrect pronouns (i.e., they refuse to lie); a male middle school teacher was disciplined for refusing to supervise a masquerading girl as she used the boys’ locker room; Obama sent “Dear Colleague” letters to every public school in the country ordering them to treat sexual delusions as reality; children are being taught that in order to be compassionate, they must share restrooms and locker rooms with opposite-sex peers; and girls and boys are being forced to compete in sports against opposite-sex peers. In the face of this science-denying, privacy-eradicating, intellectually and morally vacuous ideology, it’s both incomprehensible and indefensible that school districts are burying their heads and moral compasses deep in the shifting sand.

It’s also baffling that deeply committed Christ-followers who work in public schools have not begun preparing for the inevitability that they will be ordered by the government—that is, their employer—to speak lies in the service of a body- and soul-destroying ideology.

In answer to a question regarding how Christians should refer to “trans”-identifying persons, esteemed pastor, author, and chancellor of Bethlehem College & Seminary, John Piper, writes that he would “probably… submit to [using the preferred first name] in the short run at least” because the gender-association of proper names is arbitrary and shifting. For example, the name “Joycelyn” is a boy’s name in France, and “Aubrey” is a boy’s name in England, whereas both are deemed girls’ names in the United States. More important, Piper provides the reasons Christians must not use incorrect pronouns when referring to “trans”-identifying persons:

[I]f in the office…  I was compelled to identify every so-called transgendered person by the pronoun they preferred in all of my emails, or conversations… or I would get disciplined… I would say to my superiors, I cannot treat he’s as she’s and she’s as he’s.

…. I would be lying to call a he a “she”…. And it would be contrary to my understanding of sexuality and I would start looking for another job.

The same thing applies to bathrooms, locker rooms, and hotel rooms where women identify as men or vice versa. I would refuse to have a roommate who said she was a man, even though I share a room in my travels with my assistant all the time. He is a man, and I know he is a man, and that is a perfectly normal thing to do. But if they insisted that I share the same bathroom, share the same locker room, or share the same hotel room, I am looking for another job.

…. Naming may have a certain ambiguity and arbitrariness to it, but the language of “he” and “she” and the use of bathrooms and hotel rooms does not. And I will draw a line and say, I will not call he “she.” I will not call she “he.” And I will not intrude on the sexual privacy of a person of the opposite sex or walk into a situation where they would intrude upon mine.

So, what should every Christian administrator and teacher employed by Big Brother in government schools do? They should immediately ask their superiors and school board this question:

If a “trans”-identifying student were to request that I use incorrect pronouns when referring to them, would I be required to do so even if it conflicts with beliefs about sexuality and about lying that derive from my religious faith?

No parent should place their children in a purportedly educational environment in which the adults charged with teaching do not respect the reality and meaning of biological sex, who use incorrect pronouns, who pretend that boys can be girls or vice versa, who teach implicitly or explicitly that compassion and inclusivity require students to share private spaces with opposite-sex peers, and who require them to lie about the sex of peers through the use of incorrect pronouns. So, parents too should ask their administrators and school board these questions now:

1.) If a “trans”-identifying student were to request that teachers use incorrect pronouns, will teachers be doing so?

2.) If a “trans”-identifying student were to request that peers refer to them by incorrect pronouns, would peers—like my child—be required to do so?

3.) If a “trans”-identifying student were to request use of opposite-sex locker rooms and restrooms, will they be permitted to use them? If so, would those students whose parents do not permit them to share private spaces with opposite-sex peers—like my child—be forced out of restrooms and locker rooms that correspond to their sex?

4.) Will teachers be telling students—like my child—that in order to be compassionate and inclusive, they must use incorrect pronouns when referring to “trans”-identifying students and should share private spaces with opposite-sex peers?

We don’t get to choose whom God calls to the frontlines of cultural battles or to what task he may call us. Right now, it seems obvious that he has called—among others, including church leaders—Christians employed in wedding-related businesses and in government schools to the frontlines. I hope I’m wrong, but it appears that, apart from a handful of notable cases that become court cases and news stories, Christians are taking the broad and easy road, seeking the approval of man over God.