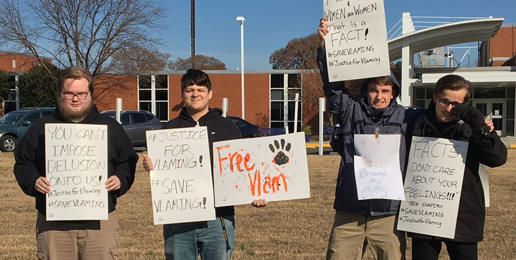 Thursday night, the school board of West Point High School in West Point, Virginia voted 5-0 to fire well-liked and well-respected French teacher (and Chicago Native) Peter Vlaming for his refusal to use incorrect pronouns when referring to a freshman girl who pretends to be a boy. Vlaming, a Christian, had agreed to use her newly adopted name and to avoid using pronouns as much as he could. Because of his faith, what he could not do is be complicit in a body- and soul-destroying fiction. According to the Virginia Gazette, the girl’s parents became angry “after an incident where the student was wearing virtual reality goggles and almost ran into a wall in the hallway and Vlaming shouted ‘don’t let her run into the wall.'” In his concern for the immediate safety of this girl, Vlaming accidentally used the correct pronoun, and the girl’s parents claimed “‘it is unhealthy for their child to remain in Vlaming’s class.'”

At the school board meeting, recently hired principal Jonathan Hochman made this astonishingly ignorant statement:

“I can’t think of a worse way to treat a child than what was happening. That was very threatening.”

Seriously? I can think of scores of worse ways to treat a child, including facilitating delusional thinking. Oh, and then there’s chemical sterilization and bodily mutilation.

How do ignorant people like this get in leadership positions? And how can any person who doesn’t recognize and respect the profound meaning and value of biological sex possibly lead children?

The Christian community darn well better come publicly alongside Vlaming, a married father of four children between the ages of 1-10, who courageously took up his cross to follow Christ.

“For whoever is ashamed of me and of my words in this adulterous and sinful generation, of him will the Son of Man also be ashamed when he comes in the glory of his Father with the holy angels” (Mark 8:38).