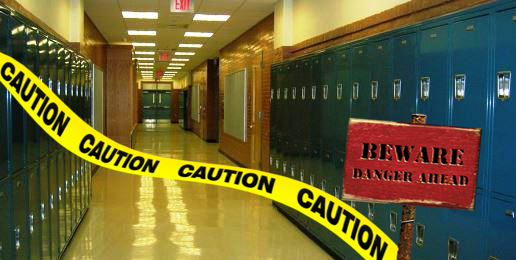 For years conservatives have asserted that homosexuals are pursuing children, and for years homo-activists have mocked that claim. Due to either their profound ignorance or their commitment to deception as a tactic for advancing their pernicious goal of normalizing homoeroticism, homo-activists misrepresented what conservatives were claiming.

The same goes for “trans”-activists who, like homo-activists and their ideological allies, are hell-bent on using public schools to pursue the hearts and minds of other people’s children.

These activists teach other people’s children that homoeroticism and biological-sex rejection (i.e., “transgenderism”) are phenomena to be celebrated.

They teach them that expressing the belief that homoerotic activity or cross-dressing and bodily mutilation are wrong is equivalent to bullying and the cause of teen suicide.

They teach them that men can be mommies, and women daddies.

They teach them that to be loving, compassionate, and inclusive, they must lie by calling gender-pretending peers by opposite-sex pronouns, and they must be willing to relinquish their privacy.

They expose them to plays, novels, and essays with obscene language that depict deviant sexuality positively.

They teach them that every person who believes homoeroticism and co-ed locker rooms are wrong is hateful—which includes many children’s parents.

Christian parents charged by God to train up their children in the way they should go have no biblical warrant for placing their children all day, all year in schools that refuse to recognize the immutability and profound meaning of sexual differentiation, particularly as it relates to modesty and privacy.

No Christian should teach in an institution that requires them to facilitate the body- and soul-destroying fiction that humans can be born in the “wrong” body.

No Christian teacher should refer to boys and girls by opposite-sex pronouns. If they do, they teach all students that the “trans” ideology is benign at best, if not good. They teach all children that it is justifiable to participate in the grievous fiction that subjective feelings about one’s sex have greater value and import than does one’s objective, immutable sex.

Hawaii just issued guidelines that direct schools on how “trans”-identifying students should be accommodated. The guidelines include the false claim that Title IX of the Education Amendments of 1972 and Title VII of the Civil Rights Act of 1964 prohibit “discrimination based on gender identity and gender expression.” They do not. They prohibit discrimination based on sex and sex did not then, nor does it now include “gender identity” or “gender expression.”

Here are some of the other guidelines:

1.) Schools should accept a student’s “gender identity” based on nothing more than his or her claim. No medical or mental health diagnosis or treatment is necessary.

2.) For students who will be pretending to be the opposite sex at school, there should be a meeting with school officials. Parents need not be included or notified about the meeting or the student’s opposite-sex impersonation. This directive applies to elementary, middle, and high schools.

4.) Schools should not require “trans”-identifying students to use single-occupancy restrooms or locker rooms.

5.) Schools may not share the true sex of “trans”-identifying students with students of the opposite sex whose privacy they are invading. Nor may schools share this information with the parents of students whose privacy is being invaded. So, a girl who pretends to be a boy should be able to use the boys’ restrooms—where boys use urinals—and no parents may be notified.

7.) “Trans”-identifying students should be allowed to play on opposite-sex athletic teams.

8.) Students should be permitted to cross-dress at school.

9.) School staff and faculty should use the “preferred” pronouns of “trans”-identifying and “gender nonconforming” students.

Minnesota has just issued similar guidelines but include this startling statement regarding restrooms, locker rooms, and hotel accommodations for overnight trips:

The purportedly Catholic governor Chris Christie (R-NJ) just signed a bill into law requiring schools to allow co-ed restrooms and locker rooms, and requiring teachers to refer to “trans”-identifying students by opposite-sex pronouns. The government is requiring teachers to speak falsehoods to and in the presence of children. Will theologically orthodox Christians comply? Will they bear false witness by pretending that boys are girls or vice versa? Will they render unto Caesar that which is not Caesar’s?

These things are happening in public schools all around Illinois, and where they aren’t yet, they will be soon.

Unfortunately for the countless children and teens who attend public schools, the 2017/2018 school year is just around the corner, and like dirty old men in trench coats lying in wait to expose children to sordid things, so too await public school administrators and teachers to do likewise. Unlike perverts who lurk in darkness, however, these government employees have no shame. They do their dirty work of exposing children to wickedness openly and call it “love.”

Listen to this article read by Laurie HERE
.

The Collapse of Gender Sanity

Is the GOP Suicidal?
b
a
x
r