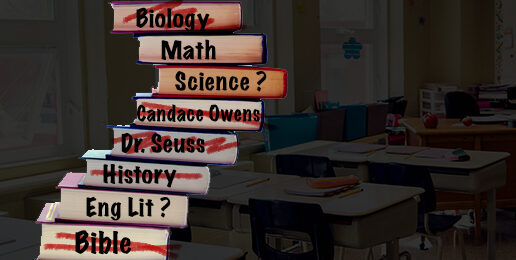 What becomes obscured in discussions of censorship, book-banning, or “selection criteria” in government schools is the egregious offense of using public money to subsidize curricula and activities that undermine many taxpayers’ moral and political beliefs.

Some “progressive” parents and teachers argue that those who don’t want their children taught controversial texts can send their children to private schools, ignoring the fact that “progressives” oppose school vouchers that would make such a choice possible. Perhaps when public funds are being used, those parents and teachers who oppose even minor curricular concessions in order to respect and accommodate the beliefs of all who subsidize public education are the ones who should send their children to or teach in private schools.

The issue of whether taxpayers, even those who have no children in school, should be required to fund the teaching of offensive, controversial, divisive, and destructive material is important. Many Americans rightly believe that obscene texts contribute to the debasement of an already vulgar culture and that leftist texts infused with Critical Race Theory contribute to the anti-American anarchy we see in our streets, neither of which should schools promote.

This does not mean texts must avoid examining the flaws and evil that afflict man. Rather, it means that we should choose texts that look at the presence of ignobility and evil but do so in ways that inspire, edify, chasten, and point us in the direction of truth, beauty, and righteousness.

Books with profuse obscenity and graphic sex and the willingness of educators to teach such material convey the message that such material is benign, a message with which many parents vigorously disagree. And books that promote as true—rather than critically examine—arguable ideas about race, race relations, and American history inculcate rather than educate.

Some argue that resources that depict graphic sexuality, include profane and obscene language, or promote leftist racism will not affect students. But this is an absurd claim particularly coming from “educators” who see themselves as “agents of change.” Teachers who see themselves as change agents base their text selections on whether and how race, gender, class, homosexuality, “trans”-cultism, and American history are depicted in their fervent hope of transforming the ideas, morals, or values of other people’s children, so clearly they believe that words have the power to transform students.

Parents who object to the inclusion of texts on recommended or required reading lists due to obscene language, sexuality, or highly controversial messages are not engaging in some kind of inappropriate censorship. All educators evaluate curricular materials for objectionable content, including language, sexuality, and controversial themes. The irony is that when teachers decide not to select a text due to these elements, they view their choices as an exercise in legitimate decision-making, but when parents engage in it, they are tarred with the label of “censor.”

Every parent should be able to send their child to school confident that their political and moral beliefs will not be challenged by change agents or curricula, especially since this confidence can be secured without compromising the academic enterprise.

Leftist “educators” have arrogated to themselves the right to create text-selection criteria; to define what “safety” means and whose safety matters; to determine which ideas should be included, studied, and tolerated; and to decide which ideas must be excluded, canceled, and stigmatized.

It should be obvious that America is not becoming a more tolerant, less stigmatizing, less shaming culture. Quite the contrary. All that’s changing now is that theologically orthodox Christians and Orthodox Jews are being marginalized, stigmatized, and shamed. And the means by which this new religious discrimination and stigmatization is occurring is through legal prohibitions of speech, ideological compliance standards for employment, and by government-sponsored indoctrination in what used to be schools.

Leftists have ideologically hijacked both curricula and policy, turning schools into mal-education camps. And they’re using taxpayer funds to do it. If conservatives hope to train up their children in the way they should go and to restore our culture, they must get their kids out of government schools. And until they do, they should object tenaciously to every objectionable resource taught.