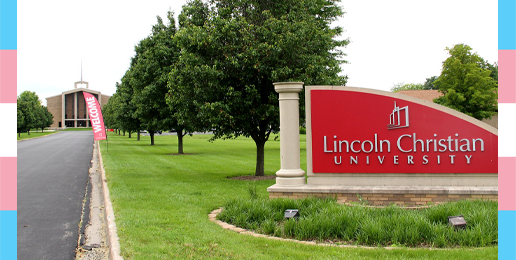 It’s astonishing that America’s first freedom—the most fundamental of all constitutionally protected rights—is threatened by cross-dressers and others in bondage to disorders related to sexuality. That which has made America great—a beacon of light to oppressed peoples around the world—is being dismantled by those devoted to sexual libertinism. The manifold deleterious effects of the rejection of biblical truth from the public square is transforming America into a place unfit for children, families, or a free and flourishing people. While political “leaders,” including GOP “leaders” cower in their corners if men in dresses look at them cross-eyed, those men in dresses gobble up the rights of Christians. Yum yum, eat ‘em up.

The newest salvo from a man in a dress comes from “Reverend” “Kalie” Hargrove, a man who now pretends to be a woman and who filed a Title IX complaint with the Office for Civil Rights of the Department of Justice (DOJ) claiming that Lincoln Christian University in Lincoln, Illinois violated his Civil Rights under Title IX of the Education Amendments of 1972.

Mr. Hargrove was a student at Lincoln Christian University when he made the free choice to begin cross-dressing and pretending to be a woman. As a result, the Christian university told him he had to withdraw from classes or face discipline. Mr. Hargrove then filed his complaint.

Hargrove is being represented by the Religious Exemption Accountability Project (REAP), whose sole raison d’être is to sue Christian colleges and universities that receive federal funds in order to force them to abandon their biblical convictions in deference to those who worship sexual sin and who demand that all Christians do likewise.

Ain’t gonna happen. The wheat and chaff will be separated and the chaff burned up. The lukewarm church will be vomited out. And REAP will one day reap the whirlwind that it is sowing.

In August 2021, the University discriminated against Kalie Hargrove (Student A) on the basis of sex (gender identity) by directing her [sic] either to withdraw from classes or face discipline because she [sic] publicly identified as transgender.

REAP and Hargrove are citing Title IX of the Education Amendments of 1972 as the basis for their complaint. Title IX prohibits discrimination based on sex. Title IX says nothing about “gender” or “gender identity”—which as sexual anarchists continually proclaim are entirely different from sex. In reality, the socially constructed, screwball idea of an “identity” based on subjective feelings about one’s sex wasn’t even on the cultural horizon when Title IX was written and passed.

As Ben Shapiro, Ryan T. Anderson, and others predicted, the boneheaded decision written by Supreme Court Associate Justice Neil Gorsuch in the Title VII case Bostock v. Clayton County made inevitable a conflict between Title IX and Title VII. Gorsuch decided that if employers don’t treat men who pretend to be women exactly as they treat women, then they’re guilty of discrimination based on sex. As legal scholars predicted and leftists knew, Bostock paved the way for legal attacks on both women’s sports and Christian schools that treat people differently in some contexts based on sex differences.

As I wrote in 2020 following Gorsuch’s janky decision,

Ironically, Lincoln Christian University was founded by Earl C. Hargrove. So, a Hargrove heretic seeks to impose his socially constructed heretical theology, which is misshapen by his sinful desires, on a university founded by a Hargrove Christian.

Slowly incrementally leftists have been engaged in a long battle to eradicate all public recognition of sex differences. The ideological weapons central to this battle include the heterosexual revolution fomented by the perverse Alfred Kinsey and Hugh Hefner, feminism, the homosexual revolution, and “trans”-cultism. Since this battle is at its core a spiritual battle, it also entails eradicating the church’s freedom to preach and teach. Leftists believe that identity defined by biblical orthodoxy must be subordinated to identity defined by disordered sexual appetites.

Further, there are no societies in which individual freedom in all areas of life is absolute and without limit. A society is not a collection of atomized individuals united by nothing other than shared geography. Rather, societies are group projects in which diverse peoples are united by ideas, principles, and values. The question before us is which ideas, values, and principles will we uphold and teach. If leftists continue to dominate all cultural institutions, we will enslave future generations to leftist ideas and values that are shaped by disordered sexual appetites, instead of freeing future generations by providing sexual boundaries consonant with reality.

The Cultural Tide Is Turning
b
a
x
r