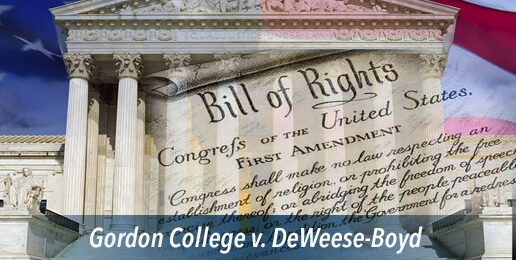 The U.S. Supreme Court in Hosanna-Tabor (2012) and Our Lady of Guadalupe (2020) embraced what Justice Samuel Alito described as the “so-called ministerial exception,” a doctrine that exempts religious organizations from discrimination laws when dealing with certain employees. Why “so-called”? Because the exemption covers more than just ministers or the top officials of a religious organization. It also covers some teachers in church elementary schools, as the U.S. Supreme Court held in both of those cases. The cutting issues now are how to define other employees who will be covered and who will decide which individuals qualify.

The majority of justices are advancing a loose definition that weighs the employee’s religious duties and functions. But that leads to decisions like the recent one of the highest court in Massachusetts, which, after sifting the evidence, ruled that a social work faculty member of Gordon College, a forthrightly Christian college, was not a “minister.” Yes, the court reasoned, the college required her to integrate a Christian worldview into her teaching and to be a moral exemplar and counselor for her students, but the court could not see what social work had to do with religion.

The problem on the surface is that most state court judges went to secular colleges and “just don’t get it.” The deeper problem is that no secular judge (even U.S. Supreme Court justices) should even be trying to determine whether a faculty member at a Christian college must conform to the college’s statement of faith and practice for the college to best carry out its mission.  That should solely be the decision of the college.

The U.S. Supreme Court in both Hosanna-Tabor and Our Lady of Guadalupe correctly observed that the “ministerial exception” grows out of the larger doctrine of so-called “church autonomy,” so-called because it covers all sincerely religious organizations, not just churches. A key principle of that doctrine is that secular officials have neither the competence nor authority to decide religious questions, and hence, they must keep hands off the internal governance of religious organizations in any way that affects their religious ministry or involves examining religious doctrine.

Since a person employed by an organization is central to its internal governance, it follows that religious organizations must be the ones to decide which of its employees must comply with its faith and conduct principles. This is the position Justice Clarence Thomas took when concurring in both cases, and he was joined by Justice Neil Gorsuch in Our Lady of Guadalupe.

The Massachusetts court worried that if it adopted such a principle, a religious organization could abuse the process by saying that a janitor was protected by the ministerial exception. The implications that motivated the court are all false: religious organizations will not, as a general matter, try to abuse their legal privileges; janitors will not always be outside the proper scope of the exception (they too may offer prayers and provide worship content); and, more broadly, there is a well-accepted check on potential abuse that secular courts can administer.

This check is the requirement that a religious organization’s assertion of who is a “minister” must be “sincere” or “in good faith.” In the case of a janitor, a court could look to see whether the religious organization had consistently imposed faith and practice requirements on those performing the task. Secular courts have applied this limiting principle of good faith for years in cases involving religious claims, and it should be applied in the ministerial exception context as well.

The Illinois Family Institute is filing a brief with the U.S. Supreme Court requesting that they review the Gordon College case and to adopt that rule.

The Nightmare of Roe Ends, But Undoing the Damage Continues
b
a
x
r