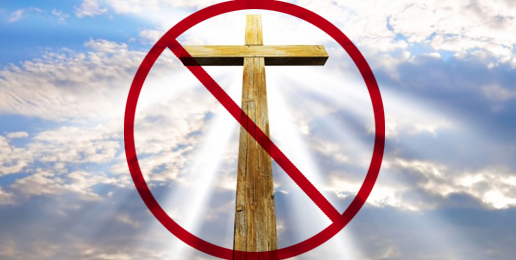 The Criminalization of Christianity
Written By Laurie Higgins   |   04.24.19
PRINT

On May 4, Australian rugby star Israel Folau, who was expected to play at the World Cup this fall, will come before a three-member panel of Rugby Australia following his firing by the organization for allegedly committing “a high-level breach of the Professional Players’ Code of Conduct.” His high-level offense is this Instagram post:

Those that are living in Sin will end up in Hell unless you repent. Jesus Christ loves you and is giving you time to turn away from your sin and come to him.
_______________

Now the works of the flesh are manifest, which are these, adultery, fornication, uncleanness, lasciviousness, idolatry, witchcraft, hatred, variance, emulations, wrath, strife, seditions, heresies, envyings, murders, drunkenness, revelings, and such like: of the which I tell you before, as I have also told you in time past, that they which do such things shall not inherit the kingdom of God.
Galatians 5:19-21 KJV 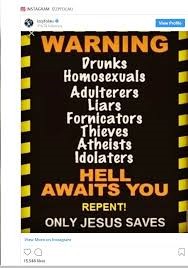 Does anyone think his “high-level breach” had anything to do with saying that unrepentant drunks, adulterers, liars, fornicators, thieves, atheists, and idolaters will go to hell? Yeah, me neither.

Folau’s unspeakable sin is including homosexuals in a biblically-derived list of sinners whom God says will not see his kingdom. No matter that Folau’s (and St. Paul’s) hope is to save people from eternal damnation. In the eyes of the fallen world, Folau (and I guess St. Paul) is a hater.

Folau, whose contract doesn’t expire until 2022, stands to lose his salary of well over one million dollars per year. Despite the huge financial and personal costs, the Daily Mail reports he has no regrets:

When asked if the fallout has made him reconsider his comments, Folau, a devout Christian, replied: ‘Absolutely not. I’ll stand on what the Bible says.… First and foremost, I live for God now. Whatever He wants me to do, I believe His plans for me are better than whatever I can think. If that’s not to continue on playing, so be it. In saying that, obviously I love playing [rugby] and if it goes down that path, I’ll definitely miss it. But my faith in Jesus Christ is what comes first.’

Now that statement took courage, unlike the statements of athletes who announce their homoerotic attraction, which take no courage at all.

Another rugby player, Michael Leitch, posted a video on social media calling Folau a “bully,” but is he?

Bullies are those who possess cultural power and wield it against those with little or no cultural power. In Western societies like Australia and America, it is “progressives” who control government schools, academia, the arts, professional medical and mental health organizations, mainstream media, social media, and the increasingly expansive, invasive world of corporate mega-monopolies.

When “progressives” call theologically orthodox Christians ignorant, hate-filled bigots for their belief that homosexual acts are immoral, they are bullies. When a homosexual man sues an elderly florist for declining to provide custom-made floral arrangements for his anti-wedding ceremony, he’s a bully. When two lesbians force a Christian couple with five young children to choose between violating their religious beliefs or losing their livelihood, they’re bullies.

If Scripture and the historical witness of the church are true, every affirmation of homosexual desire, homosexual acts, or homosexual relationships by non-Christians, apostate Christians, or Christian heretics (also known as wolves in sheep’s clothing) constitutes a pernicious act by virtue of its road-to-hell-paving implications.

If Scripture is true, these daily affirmations grievously harm people, so should all those who proclaim that lies are truth and wickedness is righteousness lose their jobs, be fined, or be jailed?

As should be clear, the offensiveness of a claim depends centrally on whether it is true—not on whether others like to hear it. It should also be clear that neither the rugby governing board, nor the Human Rights Campaign, nor any wolf in sheep’s clothing has any proof that Scripture is false or that their moral claims are true.

And by now it should also be clear to Christians exactly where sexual revolutionaries in Western nations are leading—or pushing—us. Before long anyone who expresses conservative beliefs on sexuality will be unable to work. Anyone who does the following will be fired and fined or jailed:

“Progressives” in America issue self-serving rationalizations for their dangerous efforts to eradicate First Amendment protections for theologically orthodox Christians, asserting that speaking freely doesn’t guarantee absence of consequences. But in a world controlled by mega-monopolies, what if those consequences include an inability to earn a living? What kind of protection does the First Amendment provide for speech or religious free exercise (as distinct from freedom to worship only) if Americans who exercise those rights can’t earn a living?

In his second letter to Timothy, Paul wrote,

“In fact, everyone who wants to live a godly life in Christ Jesus will be persecuted.”

And we learn this in Mark:

“Truly I tell you,” Jesus replied, “no one who has left home or brothers or sisters or mother or father or children or fields for me and the gospel will fail to receive a hundred times as much in this present age: homes, brothers, sisters, mothers, children and fields—along with persecutions….”

Since everyone who wants to live a godly life in Christ Jesus will be persecuted, and since no one who follows Jesus will fail to receive persecution in this age, what might it signify that so many Christians in Western societies never experience persecution?

Christians should ask themselves now if they’re willing to take up their crosses daily to follow Christ.

And they should prepare themselves for the criminalization of Christianity, because it rapidly approaches.