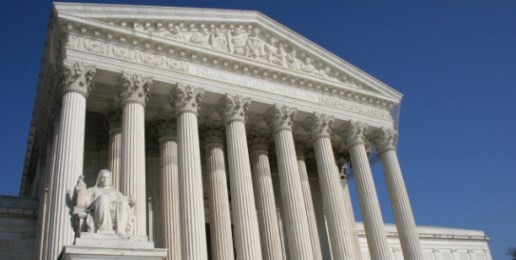 The Supreme Court of the United States (SCOTUS) ruled today that the Christian-run Hobby Lobby doesn’t have to obey the HHS mandate that is a part of Obamacare that requires businesses to pay for abortion causing drugs in their employee health care plans.

The Obama administration was attempting to make Hobby Lobby and thousands of pro-life businesses and organizations comply with the HHS mandate that compels religious companies to pay for birth control and abortion-causing drugs for their employees. However, the U.S. Supreme Court today issued a favorable ruling in Sebelius v. Hobby Lobby Stores, Inc., a landmark case addressing the Constitutionally guaranteed rights of business owners to operate their family companies without violating their deeply held religious convictions.

“HHS’s contraception mandate substantially burdens the exercise of religion,” the decision reads, adding that the “decision concerns only the contraceptive mandate and should not be understood to mean that all insurance mandates.” The opinion said the “plain terms of Religious Freedom Restoration Act” are “perfectly clear.”

Justice Anthony Kennedy wrote a concurring opinion saying that government itself could provide the coverage for contraception and the abortion-causing drugs if a company declines to do so.

Justice Ruth Bader Ginsburg issued a dissent that claims the decision is “of startling breadth,” a claim the majority denies. The major decision indicates it applies to the abortion mandate, not blood transfusions or other practices to which people may have religious objections.

The Hobby Lobby decision only applies to companies, including Conestoga Wood Specialties, which had a companion case pending before the U.S. Supreme Court. Non-profit groups like Priests for Life and Little Sisters are still waiting for a ruling about their right to opt out of the mandate.

The Obama administration said it was confident it would prevail, saying, “We believe this requirement is lawful…and are confident the Supreme Court will agree.”

Responding to the decision, Alliance Defending Freedom Senior Counsel David Cortman told LifeNews: “Americans don’t surrender their freedom by opening a family business. In its decision today, the Supreme Court affirmed that all Americans, including family business owners, must be free to live and work consistently with their beliefs without fear of punishment by the government. In a free and diverse society, we respect the freedom to live out our convictions. For the Hahns and the Greens, that means not being forced to participate in distributing potentially life-terminating drugs and devices.”

In July, a federal court granted Hobby Lobby a preliminary injunction against the HHS abortion-drug mandate. The injunction prevented the Obama administration from enforcing the mandate against the Christian company, but the Obama administration appealed that ruling. Hobby Lobby could have paid as much as $1.3 million each day in fines for refusing to pay for birth control or abortion-causing drugs under the mandate.

After the appeals court ruling, U.S. District Judge Joe Heaton issued a preliminary injunction and stayed the case until Oct. 1 to give the Obama administration time to appeal the decision.

In an opinion read from the bench, the court said, “There is a substantial public interest in ensuring that no individual or corporation has their legs cut out from under them while these difficult issues are resolved.”

“Half of voters now oppose a government requirement that employers provide health insurance with free contraceptives for their female employees,” Rasmussen reports.

The poll found: “The latest Rasmussen Reports national telephone survey finds that 38 percent of Likely U.S. Voters still believe businesses should be required by law to provide health insurance that covers all government-approved contraceptives for women without co-payments or other charges to the patient.

Fifty-one percent (51 percent) disagree and say employers should not be required to provide health insurance with this type of coverage. Eleven percent (11 percent) are not sure.”

Another recent poll found 59 percent of Americans disagree with the mandate.

The Green family, which owns Hobby Lobby, grew their family business out of their garage. They now own stores in 41 states employing more than 16,000 full time employees. They have always operated their business according to their faith.

Kristina Arriaga, Executive Director of the Becket Fund, tells LifeNews, “In fact, the Greens pay salaries that start at twice the minimum wage and offer excellent benefits, as well as a healthcare package which includes almost all of the contraceptives now mandated by the Affordable Care Act. Their only objection is to 4 drugs and devices which, the government itself concedes, can terminate an embryo.”

“Their rights under the Religious Freedom Restoration Act should be protected by the government. Instead, the government has threatened them with fines and fought them all the way to the Supreme Court,” Arriaga added.

“The government has already exempted tens of millions of Americans from complying with the mandate that forces employers to provide certain specific drugs and devices. However, it refuses to accommodate the Green family because the Green family’s objections are religious.  We believe that the government’s position is not only extreme and unconstitutional; it presents a grave danger to our freedoms,” she continued.

“My family and I are encouraged that the U.S. Supreme Court has agreed to decide our case,” said Mr. Green, Hobby Lobby’s founder and CEO.  “This legal challenge has always remained about one thing and one thing only: the right of our family businesses to live out our sincere and deeply held religious convictions as guaranteed by the law and the Constitution. Business owners should not have to choose between violating their faith and violating the law.”

This article was originally posted at the LifeNews.com blog.