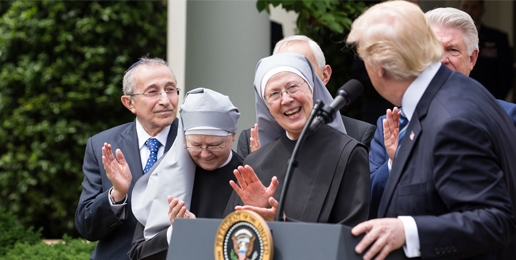 Last week, President Donald Trump announced that his administration will exempt employers who have religious or moral objections to providing contraceptives, including drugs that can cause abortions. This is an important action to restore religious liberties that were stripped away in the Obamacare HHS mandate.

The Little Sisters of the Poor, Hobby Lobby and Conestoga Wood Specialties brought the Obamacare violation of religious freedom to the national spotlight when they fought the mandate at the U.S. Supreme Court. The sincere religiously informed consciences of the owners of Conestoga Wood and Hobby Lobby played heavily into the opinion of Justice Samuel Alito, which upheld religious liberty and freedom of conscience.

“Our legal team went to court in 2012 to fight this unjust mandate on behalf of the Hahns, a Mennonite family and owners of Conestoga Wood Specialties,” said Michael Geer, President of the Pennsylvania Family Institute. “Thankfully, in 2014, the Supreme Court victory granted relief for the Hahns and the Green family (owners of Hobby Lobby) in a landmark ruling. We’re glad now to see that other religious employers and ministries will be protected as well, thanks to the President’s actions.”

“President Trump deserves to be thanked for upholding his promise on religious freedom,” said Paul Weber, President of Focus on the Family’s Family Policy Alliance. “And we’re grateful for the team of attorneys brought together by the Pennsylvania Family Institute that paved the way to this victory through their outstanding work that led to the Supreme Court win.”

Randall Wenger, Chief Counsel for the Independence Law Center, was interviewed by a local Fox affiliate outside of Conestoga Wood to discuss this policy improvement. “The first liberty in our Bill of Rights is the free exercise of religion, and what this mandate is doing is protecting the rights of conscience not only for religious people but for non religious people.”

In response to Leftist hysteria over this minor change, National Review’s David French explains that “Totally ignored by these borderline-apocalyptic assessments of what was, in fact, a modest rollback is the reality that birth control has only very recently come to be viewed as an entitlement.”

IFI joins other pro-family groups across the nation in applauding this important action by President Trump. Moreover, we stand in full agreement with his statement on the issue: “No American should be forced to choose between the dictates of the federal government and the tenets of their faith.”

Join us in Hoffman Estates for IFI’s annual banquet on Friday, Oct. 27th.  This year we are celebrating our 25th Anniversary with American hero Lt. Col. Allen West as our keynote speaker. Space is limited, don’t miss this special event. Click HERE for more information.