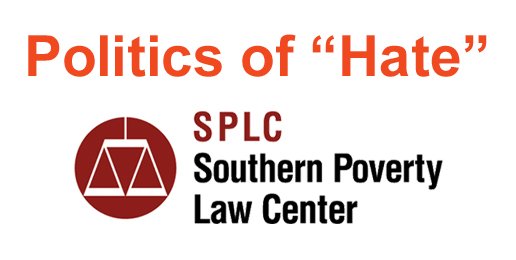 “If you believe in traditional marriage and historic Christianity — watch out — there is a powerful organization that is trying to marginalize you by designating you as a hater — and they could even put your life in danger.”

The SPLC is redefining the word hate so it applies to anyone who disagrees with the radical left-wing agenda of the SPLC.

In this informative presentation, leaders of Christian organizations are interviewed about the growing danger of the SPLC’s influence in the media and in culture. Too many people believe the organization is an unbiased arbiter. Much of that is because the organization’s reputation is based upon the fact that it did some good work towards the end of the civil rights era.

As genuine hate groups like the KKK began to fade, the SPLC looked for a new way to keep the money flowing into the organization. Calling Christian organizations “hate groups” to raise money from radical Leftists has turned out to be very profitable. The organization’s coffers contain roughly $300 million dollars, with a sizable chunk of that money stashed in overseas accounts.

The video cites two shootings that are directly tied to the SPLC. In 2012, a man using the SPLC “hate” list, attempted to kill several people at the offices of the Family Research Council. Earlier this year, another fan of the SPLC sought to assassinate several Republican members of Congress.

Frank Wright states that it is a “modern form of insanity” for anyone to believe that Christian historian David Barton should listed alongside admitted racist David Duke on the SPLC’s “hate” map.
The mask has come off the Southern Poverty Law Center, and this video needs to be seen by millions of Americans. Please watch it and help spread the word.