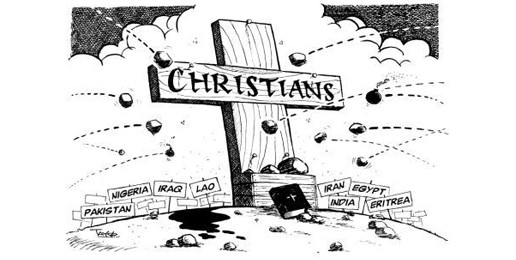 Kim Dae Jin recalls the day when, as a prisoner in a North Korean labor camp, an informant betrayed a small group of prisoners who were Christian, which to be was forbidden.

“I watched as they (prison officials) grabbed hold of my friend’s arm so tightly that it died and had to be amputated,” he said. “After that, he and the other Christians were sent to an even stricter camp. You do not get out of a camp like that alive.”

Sadly, Kim’s tale is all too common in North Korea’s brutal regime. In its newly released annual report on Christian persecution, Open Doors notes that up to 70,000 Christians are being held in horrific conditions in the North Korean prison “gulag.” In them, everyone, from small children to the elderly, is subject to sub-human treatment, often for simply believing in Jesus.

One of the great tragedies of our time is that the situation in North Korea is by no means unique. Open Doors “works in the world’s most oppressive countries, strengthening Christians to stand strong in the face of persecution and equipping them to shine Christ’s light in these dark places.” Such places are far too common in the 21st Century.

In its annual “World Watch List,” Open Doors lists no less than 27 countries where persecution of Christians can be considered “extreme or severe.” These include such “mainstream” nations as Saudi Arabia and Egypt, as well as long-time religious liberty violators like Iran and Somalia.

Ministries like Open Doors, Voice of the Martyrs, China Aid and Christian Solidarity Worldwide do brave and vital work in helping persecuted believers, reminding us in free countries of the pain they face, and motivating international action on their behalf. Family Research Council (FRC) has worked and will continue to work with these organizations to educate and equip Christians in America to stand with the persecuted church and advocate on their behalf.

Our persecuted brothers and sisters should continually be in our prayers. But praying is not enough. We need to be financially supporting these vital ministries that are helping persecuted and imprisoned Christians around the globe. We must also call upon our governmental leaders to advocate for those who are being persecuted for their faith.

Unfortunately, the Obama administration’s record on defending Christians persecuted for their faith has been embarrassingly weak. Under Mr. Obama’s watch, the State Department’s international religious freedom department has “missed some of the biggest crises of our day,” according to leading advocate for the persecuted Nina Shea.

This international indifference to religious freedom should not surprise us when here at home we see hostility toward religious freedom from the Obama administration. As FRC has documented extensively, erosion of religious liberty in American public life and in our military are increasing.

This hostility to religious freedom has been evident in the president’s hallmark legislation, the Affordable Care Act (ACA). Under a provision of the ACA, Christian colleges and hospitals and Christian-run businesses would be required to provide their employees with health insurance plans that cover potential abortion-inducing drugs. This is a massive violation of their right to live out their faith in the marketplace, in the health care system, and in the academic world.

To be sure, American Christians experience nothing like the gruesome punishment Christians undergo daily around the globe. Yet the precursor to persecution is always repression, the forcing-down of Christian faith into quiet corners where its visibility is limited and its impact is weakened.

We are witnessing that kind of growing repression in the U.S. today and it is fostering or at least giving rise to the spread of the persecution of Christians and religious minorities around the world. Even as we stand with believers like Kim Dae Jin, we have to be vigilant in defending religious liberty where it’s always been most sacred – our own country.

On January 16, we will commemorate our annual “Religious Freedom Day.” Let’s hope, work, and pray that our “first freedom,” religious liberty, will not only remain our first freedom, but also become a freedom that people around the world will experience.

This article was originally posted at the ChristianPost.com.

The One-Sided Din Over Taxes