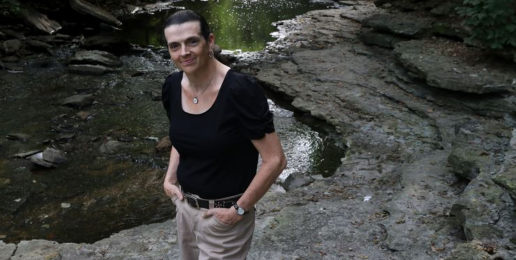 An Illinois Appellate Court just ruled that Hobby Lobby violated the Illinois Human Rights Act by refusing to allow a male employee who masquerades as a woman and goes by the name of “Meggan Renee” Sommerville to use the women’s restroom. If this decision is not appealed and overturned, it will mean the end of sex-separated private spaces in all companies in Illinois, including stores and restaurants.

Mark Thomas Sommerville was hired as the man he is and always will be by Hobby Lobby in 1998. In 2009, he began cross-sex hormone-doping to conceal his biological sex, and in 2010, he began cross-dressing. That same year, he legally changed his name and obtained a falsified driver’s license and Social Security card that wrongly identify his sex as female. He also “formally informed Hobby Lobby of her [sic] transition and her [sic] intent to begin using the women’s bathroom at the store.”

Hobby Lobby, justifiably and wisely, told him he could not use the women’s bathroom that was available to both female employees and female customers. Hobby Lobby, however, foolishly changed Sommerville’s personnel records and benefits information to reflect his “gender identity” rather than his sex.

Despite Hobby Lobby’s restroom directive, the self-absorbed Sommerville continued to use the women’s restrooms which resulted in Sommerville being written up. After “breaking down in tears,” he sashayed over to Illinois’ leftist Human Rights Commission to file a complaint. The Chicago Tribune reported,

The commission found Hobby Lobby violated the Illinois Human Rights Act, which prohibits discrimination based on gender identity in both workplaces and places of public accommodation, such as public restrooms. The commission determined that the company owed Sommerville $220,000 in damages, at the time the highest amount ever awarded by the commission for emotional distress.

The three Appellate Court justices, Ann B. Jorgenson, Mary S. Schostok, and Kathryn E. Zenoff, who decided this case are all Republicans. (But are they women? And what is a woman?)

So colossally self-centered is Sommerville that he was willing to forsake his marriage for his masquerade. By choosing an appropriated false identity over his marriage, Sommerville, who self-identifies as a Christian, clearly violated his marriage oath.

Forbes reports that “According to her [sic] lawyer, the decision applies statewide to every transgender individual and every public bathroom.”

The lawyer to whom Forbes refers is homosexual Jacob Meister, who is the founder of an “LGBTQ” advocacy organization. Meister ironically said, “To use the bathroom at work, without being humiliated and frightened … is a fundamental right.” Well then, are biological women entitled to use bathrooms free of the presence of biological men when the presence of those men makes them feel humiliated and frightened?

The Tribune also reported this:

There’s a woman’s restroom at the East Aurora Hobby Lobby where Meggan Sommerville works, but for 10 years, she’s [sic] been barred from using it because she [sic] is transgender. She [sic] has had to punch out of work and cross a parking lot in the rain or snow to access the bathroom at a fast-food restaurant, she [sic] said.

In 2013, Hobby Lobby installed a single occupancy unisex restroom to accommodate Sommerville’s ontological fiction, so he did not have to cross the parking lot in rain or snow for the past eight years.

The ruling by the triumvirate of female GOP justices includes this fanciful, science-denying statement:

Sommerville, who was born in 1969, was designated as male at birth.

Surely, three bright appellate court justices know that babies aren’t “designated” a sex at birth. Surely, even attorneys know enough science to understand that the sex of babies is identified and recorded at birth. And surely, they know that one’s sex never changes.

The triumvirs continued with their non-sense:

In 2007, Sommerville began transitioning from male to female. In 2009, she [sic] disclosed her [sic] female gender identity to some staff at Hobby Lobby

Since the Illinois Human Rights Act that prohibits discrimination in places of public accommodation specifically exempts private spaces such as restrooms and locker rooms, many wonder how this queer, inequitable ruling came about. It came about via some rhetorical chicanery—some leftist sleight-of-tongue. Here’s what happened when too few were paying attention.

Here’s what they wrote:

Hobby Lobby contends that an individual’s “sex”—the status of being male or female—is an immutable condition. However, the plain language of the [Illinois Human Rights] Act does not support this conception. There is simply no basis in the Act for treating the “status” of being male or female as eternally fixed. … Illinois law has explicitly recognized in a variety of ways that gender identity is a primary determinant of a person’s “sex” for legal purposes. … under Illinois law, an individual’s gender identity is an accepted basis for determining that individual’s legal “sex.” … Given the interrelationship between “sex” and gender identity in Illinois law, the record establishes that Sommerville’s sex is unquestionably female.

Hobby Lobby contends that, rather than applying the definition of “sex” provided by the Act, the Commission should have imported a definition of “sex” found in a dictionary, namely: one of two “forms of individuals” that “are distinguished especially on the basis of their reproductive organs and structures.” …  However, it is unnecessary to resort to dictionary definitions where a statute itself defines a term. … Here, the Act provides a clear definition of “sex,” eliminating any need to look further.

While “sex” is not eternally fixed in the Upside Down formerly known as the Land of Lincoln, the Illinois Human Rights Act—our state bible—is.

When the justices say that the Illinois Human Rights Act does not recognize sex as an eternally fixed, immutable condition and when they say that Illinois law recognizes subjective feelings about maleness or femaleness (i.e., “gender identity”) as the determiner of “sex” for “legal purposes,” they have severed laws and the practices required by law from reality.

The justices make clear that objective reality has no bearing on their decision. Henceforth, leftist-constructed, science-denying statutory law determines what “sex” is.  No need to consult science or reality. No need to consult even a dictionary—well, not until our sex-impersonators change dictionaries. Then we will be free to consult them.

This constitutes a despotic attempt to manipulate language in the law to impose “trans”-cultic practices on all of America and results in dogmatic claims like this from “Ethan” Rice, senior attorney at the destructive law firm Lambda Legal:

The foolish justices wrote this foolishness:

The presence of a transgender person in a bathroom poses no greater inherent risk to privacy or safety than that posed by anyone else who uses the bathroom. …  In arguing that Sommerville’s use of the women’s bathroom will cause a legitimate intrusion upon privacy, Hobby Lobby “ignores the reality of how a transgender [person] uses the bathroom: ‘by entering a stall and closing the door.’” … We will not prioritize fears or discomfort that have no factual basis in the record. “Private biases may be outside the reach of the law, but the law cannot, directly or indirectly, give them effect.”

If the presence of a biological male who wishes he were or falsely believes he is a woman poses no greater inherent risk to the privacy of girls and women than that posed by women who use the bathroom, then why prohibit non-cross-dressing biological males from using women’s bathrooms? How does cross-dressing change women’s feelings about privacy?

Wouldn’t “entering a stall and closing the door” be sufficient to prevent intrusion of a “cisgender” man upon the privacy of women?

Why should the law give effect to the “discomfort” or “private biases” of women who oppose the presence of “cisgender” biological men in their private spaces?

The problem of where cross-dressing humans in cosmetically altered skin costumes engage in bodily functions is a problem of their own creation. The solution must not be demanding that normal girls, boys, women, and men relinquish their privacy to accommodate the disordered desires of persons of the opposite sex.

I hope by now, people realize that it is both foolish and dangerous to capitulate to the “trans” cult ever—not even in seemingly trivial things. Hobby Lobby agreed to change Sommerville’s sex on forms and then that capitulation was used against it by the justices:

[Sommerville’s] status of being female has been recognized not only by the governments of this state and the nation but also by Hobby Lobby itself, all of which have changed their records to acknowledge her [sic] female sex.

I hope by now, people also realize that once the terms “gender identity” and “gender expression” are included in anti-discrimination law, there remains no legal way to maintain any sex-separated private spaces for anyone anywhere. These laws spell the end of all public recognition of sex differences. If cross-dressing men must be able to use women’s restrooms and locker rooms, then so too can “cisgender” men. Why? Because prohibiting “cisgender” men from using women’s spaces while allowing biological men who identify as “transgender” to use women’s spaces would constitute discrimination based on both sex and “gender identity.”